Honduras has fired more than 300 top cops linked to organized crime. The purge comes following recommendations by a commission that will now turn its focus to more than 10,000 lower-ranking police officers. 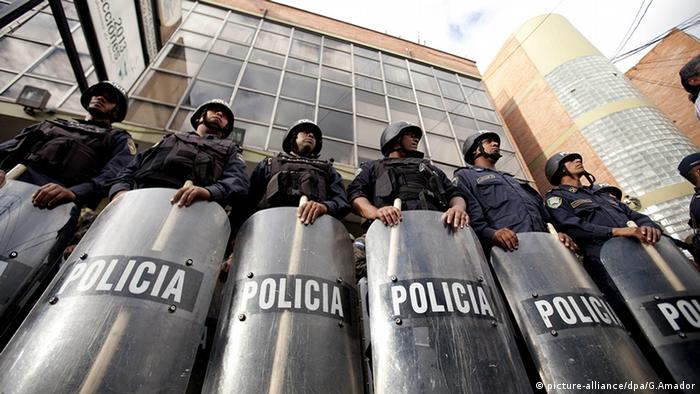 A total of 313 senior officers have been fired from the national police force of Honduras as part of a purge that began in April, a commission charged with investigating corruption announced late Wednesday. Before revealing its findings to the legislature, the panel had evaluated 946 senior officers.

Twenty-three of the officers investigated had already been suspended, and 26 others had retired before the inquiry. In the next stage, the commission will look at more than 10,000 rank-and-file officers.

The commission is made up of Justice Minister Julian Pacheco, former Supreme Court President Vilma Morales, the evangelical pastor Alberto Solorzano and the civil society activist Omar Rivera. They've found that Honduras will need to "implement similar purge processes" in other areas of the national justice system. The commissioners have also called on officials to guarantee "the continuity and sustainability" of the process of transforming the police to an agency that serves in the interest of civil society.

Hernandez became president in 2014, after a disputed election two months earlier. He was the second democratically elected ruler following the 2009 coup that ousted Manuel "Mel" Zelaya. Hillary Clinton, the US secretary of state at the time and now the Democratic vice presidential candidate, had lent verbal support to the legislature, after it pushed for the coup, which many other world leaders - and even members of her own diplomatic corps - considered illegal.

Police fire on demonstrators in Honduras; Zelaya plane turns back

Protesters and troops have clashed in Tegucigalpa, the capital of Honduras. Unconfirmed reports say that at least two protesters have been shot dead and several wounded. (06.07.2009)