Four years after a coup, Honduras might just re-instate its ousted president. Kind of. A law barring his re-election means he'd be forced to enter the presidential palace through the back door. 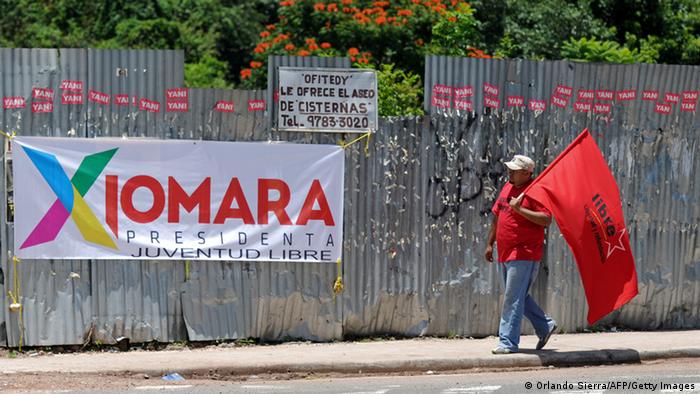 Tegucigalpa's getting ready to reset the political clock. On November 24, Hondurans will elect a new president and parliament. For the first time in a century, voters can choose between eight candidates and nine political groups. The country's current political system, one traditionally dominated by two parties swapping positions of power, will shortly be relegated to history's dustbin.

"It's a very important election, since a lot of people felt they didn't have any good electoral options in the last elections in 2009," Ines Klissenbauer of Adveniat, a Catholic humanitarian organization that supports local Honduran social projects, told DW. "With these elections there are more options, and people feel they're being better represented."

In through the back door 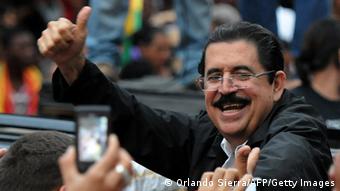 Former President Manuel Zelaya on the campaign trail - for his wife, that is

One man who hopes to accomplish that goal is Manuel Zelaya. The former president of Honduras unwillingly made headlines worldwide on June 28, 2009. That morning, Zelaya, still in his pajamas, was taken from his home and flown to Costa Rica. The international community protested the successful coup, and new elections were held in November 2009.

Ex-President Zelaya didn't take part in that poll. He followed the results from his temporary home at the Brazilian embassy in Tegucigalpa, which at that point been granting him asylum for four months. After negotiations with the newly elected President Porfirio Lobo in January 2010, he opted for temporary exile in the Dominican Republic rather than a return to life in Honduras.

Now, the ousted ex-president would like to re-enter the government palace - albeit through the back door. Honduras' constitution forbids the re-election of a former holder of public office. In the current election campaign, then, Zelaya is acting as a "political consultant" to his wife, Xiomara Castro de Zelaya. She represents the country's Liberty and Refoundation Party - "Libre," for short - and has a good shot at winning the presidency. 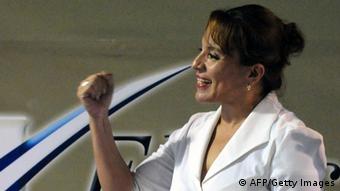 "If Xiomara wins the elections, she'll take on Zelaya's project and will form a constituent assembly to found a new Honduras," said Ricard Lagos Andino, Honduras' former ambassador to Germany and a current professor of politics at the National University of Honduras in Tegucigalpa.

As it stands, the constitution, Andino said, cements the current constellation of powers, contributing to a situation where a minority of elite Hondurans dominate the economy and political landscape.

"Zelaya wants to break up that power structure, so that change can be possible," he told DW.

Roughly 27 percent of voting-age Hondurans plan vote for Xiomara according to a survey conducted in late October by the Latin American public opinion institute Cid Gallup. That's in spite of the fact that the 54-year-old has no professional experience in public office.

Another 28 percent of voters, however, intend to deliver their vote to Juan Orland Hernandez of the ruling conservative National Party.

Even the ruling political party, though, has committed itself to a form of renewal. With the help of foreign investors, it plans to set up special development zones within the country - something akin to a laboratory. These separate communities be are intended to have social systems, exemplary legal rights for citizens as well as business-friendly tax rights to varying degrees. The communities will be based on models in foreign countries.

Such ideas, however, have met with strong resistance thus far in the election campaign. Leftist political forces consider the idea - first proposed to the government in Tegucigalpa by American economics professor Paul Romer - as a form of neoliberalism.

Those in the ruling National Party, however, plan to push the project forward with the help of a new commission of experts. 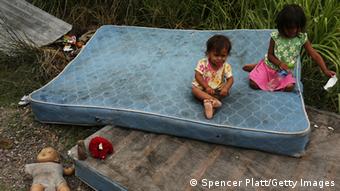 Nearly two out of three Hondurans suffer from poverty on a day-to-day basis.

For most of the country's 8 million citizens, such debates remain high above in the realm of the theoretical. According to local press sources, Honduras is one of the most dangerous countries in the world. Murder rates are at 85.5 per 100,000 people; the worldwide average is seven per 100,000, according to UN statistics.

Economically, the country's scraping rock bottom. A full 62 percent of the population lives in poverty, according to World Bank data. Government coffers are also pinched by low tax revenues and high costs due to the salaries of public officials. The result? A budget deficit that increased from 4.5 percent in 2011 to 6 percent in 2012. Exports such as coffee and banana exports have also taken a financial hit due to plummeting prices on world markets.

"People in Honduras are less satisfied than the population of Haiti, even though that country still hasn't recovered from the devastating 2010 earthquake," reported one conclusion of the 2013 "Barometer of the Americas" survey conducted by Vanderbilt University in Nashville. Political polarization, corruption and impunity have caused tremendous dissatisfaction within the country - another reason it's important for the country to reform politically after the election.

Election observers, 15,000 from Honduras and 741 from other countries, will be monitoring the head-to-head competition.

Who owns the forest in Honduras?

The species-diverse forest in Honduras is so seriously at risk from deforestation and mismanagement that UNESCO has put it on the “red list” of world heritage sites in danger. (04.12.2012)