The mayor of Batman, Turkey is going up against Hollywood's big guns, saying he wasn't told about the use of his city's name in the film "The Dark Knight," featuring the arguably more famous superhero of the same name. 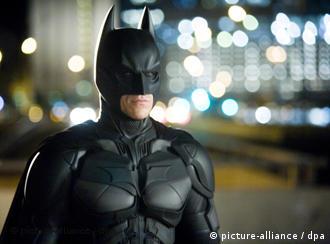 The Caped Crusader as Copyright Criminal?

"There can only be one Batman in the world," declared Mayor Hueseyin Kalkan. And lest there be any doubt, he was not referring to the iconic comic book figure who's also been the subject of a television series and several feature films.

No, he means Batman, the city in Turkey which serves as the capital of Batman province and is situated on the banks of the Batman river.

According to the German news Web site Tagesschau, Kalkan is indignant that he was not consulted over the use of his city's name during the filming of the latest Batman blockbuster, "The Dark Knight." He is reportedly directing his ire at the film's producer, Christopher Nolan.

But wait a second. The Caped Crusader has been on movie screens since 1943. So why is the good mayor of Batman only taking legal steps against the Hollywood machinery now? He didn't disclose that information to a Turkish news agency. But it likely doesn't matter, as Turkish copyright experts say his case wouldn't stand a chance.

Kalkan says he's just looking out for the interests of Batman's citizens. After all, the (superhero) Batman brand has made life difficult for some of them. Kalkan cited an example of a resident who moved to Germany and opened two restaurants named after his home town, only to be hassled by Warner film studios.

Two restaurants, mind you. And we thought there could only be one Batman in the world.

Snakes in a Box: Coming to a Post Office Near You

Anyone considering making a follow-up to the ludicrous action movie "Snakes on a Plane" may only have to look in the German press for their next lazy injection of creativity. (09.05.2008)

Google might reign as the unchallenged king of German search engines, but a lawsuit over the company's popular image search feature brings into question the rights of German artists in the Internet age. (21.10.2008)