Hollande tells Japan the eurozone's debt woes are 'over'

French President Francois Hollande has told business leaders in Japan that "the crisis in the eurozone is over" on his third and final day in the country. He also pledged to help establish an EU-Japan free trade accord. 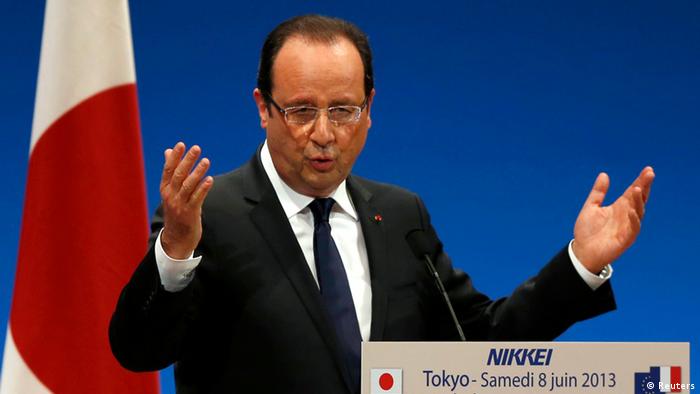 Francois Hollande struck a positive note at his last major appointment in Japan, saying he thought the worst of the eurozone's sovereign debt difficulties were past.

"It should be understood that the crisis in the eurozone is over," Hollande said at a speech organized by the major financial newspaper Nikkei at the Imperial Hotel in Tokyo.

Left with few choices, the EU Commission has given crisis-struck countries more time for reform. Now it's up to members states, especially France, to use the time to implement reform, says DW's Bernd Riegert. (30.05.2013)

European and Japanese officials and business leaders were present at the event, where the French president again lauded Prime Minister Shinzo Abe's stimulus-driven economic policies that stand in contrast to the austerity drive in much of Europe. Like Hollande, Abe won a general election last year on a campaign platform of spending more to kick-start the economy.

Hollande said that Europe and Japan, whose national debt constitutes a larger percentage of economic output than that of Greece, should together seek policies "to get out of the crisis, to regain confidence and to restart [economic] growth."

"We have to act quickly, efficiently and with a willing mindset," Hollande said. "That's what Shinzo Abe wants for Japan, it's what I want for France and it's what I want to promote for Europe."

Abe's stimulus-driven policies, coupled with major monetary easing from the Bank of Japan, prompted a massive surge on the Nikkei index in recent months, though the market has receded sharply - along with many others in the west - since mid-May.

On a similar subject, the French president said he wanted to be "a key actor" in efforts to broker a free trade deal between the EU and Japan, saying it would be "good for Europe's economy and excellent for Japan." He said that both Europe and Japan needed to find their place on the world stage, a day after promising support in seeking a permanent Japanese seat on the UN Security Council.

'Don't ask us to choose'

An audience member asked Hollande a question about China, after a 2012 deal to sell defense equipment to Beijing that can help helicopters land on ships prompted concern in Japan. Hollande said that for France it was necessary "to work with Asia and not to oppose one country or another."

"We have a friendly relationship with China for a long time now and we have an exceptional partnership with Japan. Please do not ask us to choose," Hollande said. In terms of both imports and exports, Japan was France's 11th-largest trade partner in 2012.

Hollande, accompanied by his partner Valerie Trierweiler on his three-day Japan trip, met with Prime Minister Shinzo Abe and Emperor Akihito on Friday. In an awkward slip of the tongue, he also accidentally referred to the Japanese people as the Chinese people when speaking about last year's hostage-taking at an Algerian gas plant.