French President Francois Hollande is headed to Moscow on a quest to seek unity against the "Islamic State" group. The visit comes amid a crisis in diplomatic relations between Russia and France's NATO ally Turkey. 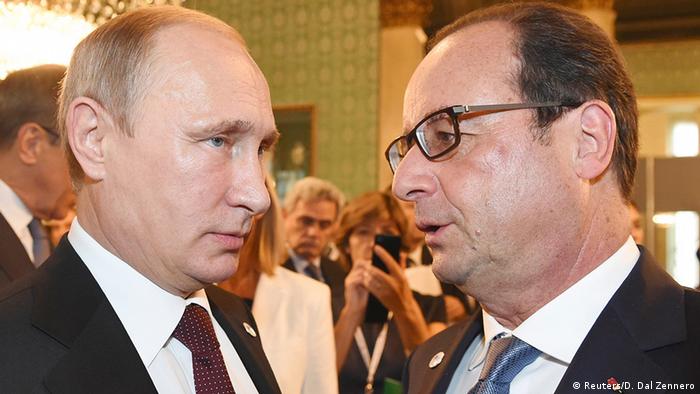 The French president embarked on the latest stage of his diplomatic efforts to forge a stronger alliance against "IS" in the wake of Turkey's downing of the Russian warplane.

Hollande met Italian Prime Minister Matteo Renzi in Paris on Thursday, ahead of the visit to Moscow where he was scheduled to hold talks with Russian President Vladimir Putin.

In response to the November 13 Paris attacks, which killed 130 people, Hollande has urged a "grand coalition" to destroy IS. As part of his efforts, the French president has met US President Barack Obama, German Chancellor Angela Merkel and British Prime Minister David Cameron in the past week.

At their meeting on Wednesday, Merkel and Hollande urged calm between Russia and Turkey, after the Turkish air force shot down a Russian Su-24 bomber on Tuesday. Russia has accused Turkey of a planned provocation.

"We must all work to make sure that the situation de-escalates," the French president told a joint news conference with Merkel.

Turkey's EU minister on Thursday said his country and Russia could not afford unfriendly relations, the Reuters news agency reported. Volkan Bozkir said he expected ties with Moscow to be maintained.

While Moscow has ruled out the possibility of a military response to the downing of its jet, Russian officials have threatened a raft of economic and political measures against Turkey.

Turkey on Thursday released audio recordings of what it said were the Turkish military's warnings to the pilot of the Russian plane that was shot down at the border with Syria. One of the plane's pilots was shot dead, apparently by Turkmen rebels as he parachuted from the aircraft, while the surviving pilot maintains no warning was issued.

France has already invoked a clause that requires EU nations to provide military assistance after the Paris attacks. Germany has so far pledged to send 650 Bundeswehr troops to Mali, where France is helping the government fight a jihadi insurgency.

Russia has announced tighter controls of Turkish food imports, citing frequent violations of safety standards in the past few months. The Kremlin said it could easily buy agricultural produce from other nations instead. (26.11.2015)

Authorities say the alleged ringleader of the terror attacks in Paris was planning to carry out another attack the following week. Abdelhamid Abaaoud was killed in a shootout with police days after the carnage. (24.11.2015)