The amount of money involved in a tax case against Bayern Munich President Uli Hoeness has risen - again. An official claims Hoeness is liable for a greater figure than the amount to which he himself confessed. 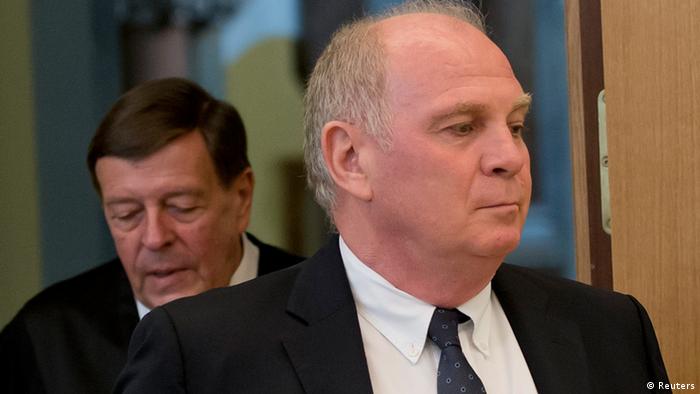 A tax investigator on Tuesday told the Munich court that Hoeness had evaded taxes totalling at least 27.2 million euros ($37.7 million).

The amount is greater than that to which Hoeness admitted on Monday, when he and his legal team made the admission that he had evaded some 18.5 million in taxes.

The latest figure is almost seven times greater than that for which Hoeness was taken to court for failing to declare. The German football legend, who also runs a successful family sausage company, is charged with evading 3.5 million euros in taxes by hiding them in a Swiss bank account.

A tax investigator told the court that the new figure took into account an extra 23.7 million euros that Hoeness should have paid for the years 2003 to 2006.

Earlier in Tuesday's hearing, the court heard that Hoeness had only supplied authorities with the required 70,000 pages of documents from his bank account two weeks before the start of the trial. It was alleged that he had held on to the information for more than a year before finally handing it over.

The memory stick with Hoeness' data was only provided to the tax office on February 27 this year, the investigator said.

On Monday, Hoeness caused a stir in court with the admission that he had evaded some 18.5 million in taxes. "I deeply regret my wrongdoing," he had said. "I will do everything necessary to ensure that this depressing chapter for me is closed."

Hoeness reported himself to authorities in early 2013 and paid 10 million euros voluntarily at the time. Any sentence handed down by the court is likely to depend on whether the admission was made early enough, and whether it was made only because Hoeness was aware of an investigation against him.

If convicted, Hoeness, who was part of West Germany's 1974 World Cup-winning squad, could face a sentence of between five and 10 years in jail.

The German taxpayers federation "BdSt" claims 55,000 tax evaders have turned themselves in over the last four years.

A respected sports boss withheld millions from the state, fueling political debate in Germany. The case played a significant role in Germany's federal elections in 2013. Now Hoeness is set to have his day in court. (10.03.2014)