Hitler′s Birthplace Still Struggles With Burden of History | Europe| News and current affairs from around the continent | DW | 14.09.2006

While Braunau will honor two Nazi victims on Thursday, the Austrian town still lacks a place that deals with its most infamous son. Sixty years after the end of World War II, some say it's still too early. 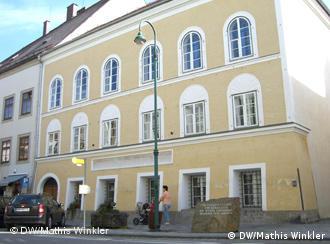 What do to with Hitler's place of birth?

Braunau is almost a town like many others on the Austrian-Bavarian border. A church spire towers over the city and youngsters meet up at a fountain in the town square, which is lined with shops and cafés that are famous for their strudels.

Bookstores have decorated their windows with the works of Pope Benedict XVI., who was born just around the corner, in Marktl. The village lies almost exactly between Germany's most important place of pilgrimage, Altötting, and Braunau, where Adolf Hitler was born -- between heaven and hell, as some said. 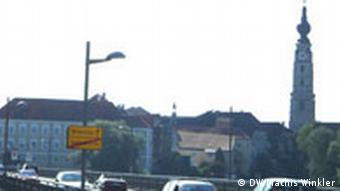 It's definitely not a label that pleases most of the 17,300 Braunauers, who have struggled with this burden of coincidence since 1945.

They have lived with the stigma of coming from the same place as the man responsible for the murder of millions. They know that it's sometimes easier to tell people that they come from "near Salzburg." While Marktl likes to forget that the pope only lived there for two years and has no personal memories of his time there, Braunauers take pains to point out that Hitler left at around the same age.

A stone as tourist attraction 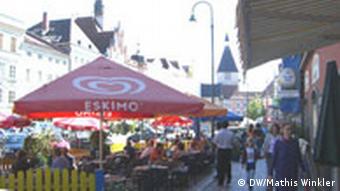 "Believe me, I'd much rather have the pope in Braunau," said Klaus Prexl, head of the local tourism office, who looks like one of the many tanned visitors who stop by on their bicycle tours through the region.

But Prexl doesn't have the Catholic leader on offer and instead struggles to deal with continuing interest in Hitler.

"Every second or third guest asks about the house," he said after one woman visiting from Poland came in to find out how she could get to the building where the dictator was born.

Like all the others, Prexl sends her down the street, through the city tower, then it'll come up on your left-hand side, watch out for the stone of admonition. 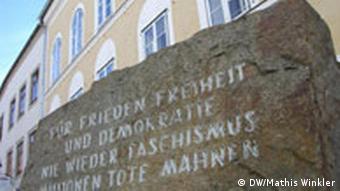 The stone's still the only marker that Hitler was born here

"For Peace, freedom and democracy," reads the inscription on the stone, which comes from the nearby Nazi concentration camp in Mauthausen. "Never again fascism. The millions of dead are a reminder."

It's the only reference to the fact that Hitler was born here and, according to Prexl, it's not enough.

"I think it's time for a documentation center," said the 57-year-old. "It exists in all the places where he committed crimes and we conceal it. It's been talked about forever, but there are local political influences that don't want it."

Far from it, countered Gerhard Skiba, Braunau's mayor since 1989. Shortly after taking office, the self-declared socialist and member of Austria's Social Democratic Party decided to place the stone in front of the house just in time for the 100th anniversary of Hitler's birthday. 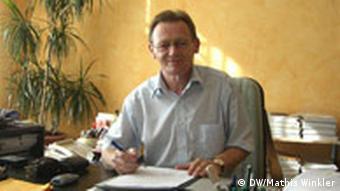 "There were pretty serious protests," Skiba said, adding that he even received some death threats. "People said: 'We don't need that, the stone could be a target for attacks.'"

He also cleansed the town of Hitler souvenirs such as beer mugs, ashtrays and wine bottles with the Nazi leader's image that were still sold at the time. He hired streetworkers to deal with signs of right-wing extremism among teenagers and enthusiastically backed the placement of so-called stumbling stones that remember people killed by the Nazis in front of the houses where they once lived. Two more of these will be placed on Thursday.

Skiba said he also wants to install a sign that identifies Hitler's birth house in front of the building in the very near future. While the Austrian government rents the landmarked structure, the owner has so far refused to agree to a plaque that's directly attached to its walls.

Ideal use of building

The owners's unwillingness to sell the house has also been one of the main reasons why a so-called House of Responsibility has not been set up inside it, Skiba said. Another reason is that the building is currently not open to the public as it is used by an organization called Lebenshilfe, which offers people with mental and other disabilities a place to work.

"That's an ideal use for the building," Skiba said. 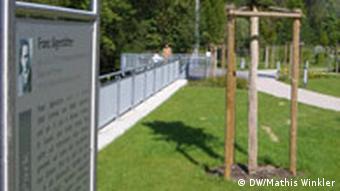 While he said that he regrets that he failed to name a fountain, bridge or street after Franz Jägerstetter, who was murdered by the Nazis for refusing to join the army, he will wholeheartedly back plans to transform Hitler's birthplace into a documentation center once it is no longer needed by its current tenants.

"Among the things that I still want to do as mayor, this has top priority," the 59-year-old said.

Some, such as Braunau's Catholic pastor, think that it might still take some time.

"I think it's too fresh," said 65-year-old Stefan Hofer, who has preached at St. Stephan's Church, where Hitler was baptized, for the past 34 years. He added that Braunau was currently taking responsibility via its Days of Contemporary History, which began in 1992 with a symposium called "Undesired Heritage" that looked at how cities such as Braunau, Auschwitz, Vichy or Stalin's birthplace Gori deal with their heritage.

Waiting for the green light

But the scientific adviser of that event said that Mayor Skiba just needs to give the political green light for the House of Responsibility. 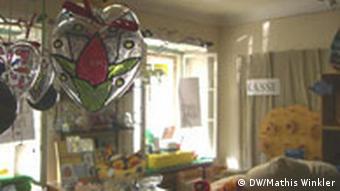 
"If he says yes, I'll raise the money," said Andreas Maislinger, a historian and political scientist, adding that the house should look at the past, present and future by giving visitors information about Hitler and his crimes, offering space for organizations such as Lebenshilfe and serving as a place that promotes intercultural understanding by inviting young Chinese and Japanese, Indians and Pakistanis, Israelis and Palestinians and others to get to know each other during a stay in Braunau.

"We're already doing that throughout the world," said Maislinger, who also founded an organization that offers young Austrians an opportunity to complete their compulsory community service abroad.

"It's all ready to go," he said. "I'll start immediately when I get the go-ahead."

Even a last-minute paint attack on the house where Benedict XVI was born didn't unnerve the residents of the village of Marktl, who are eagerly awaiting the pope's flying visit on Monday. (Sept. 11, 2006)

Austria has traditionally claimed that it was one of Nazi Germany's first victims when it was annexed in 1938 but reality tells a different story. Now, the country's Social Democrats are churning up the party's past. (July 16, 2006)

Web site of the project, which only exists online so far