In late October, a group of historians published a surprisingly popular and controversial study of the German Foreign Ministry's complicity in Nazi crimes. DW spoke to one of the authors, Professor Norbert Frei. 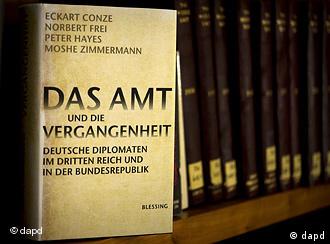 The book has made a dent on German bestseller lists

The book, entitled "The Foreign Ministry and the Past," was commissioned in 2005 by then Foreign Minister Joschka Fischer, after a minor scandal surrounding his decision not to pay the customary retirement honors to diplomats with Nazi pasts.

The 800-plus-page study documents the general lack of resistance by diplomats to Nazism and, in some cases, their active participation in Nazi crimes. It also described how many diplomats with Nazi backgrounds were quickly reintegrated into the reformed post-war German Foreign Ministry in West Germany.

The book has sold surprisingly well to a broad audience. But even four months after publication, it continues to attract critics, who say that it offers nothing new or doesn't present a nuanced portrait of diplomats' ability to act during the Third Reich.

Deutsche Welle talked to one of the authors, Norbert Frei, Professor of History at the University of Jena.

DW: The commission's work was both to collect facts about and offer a general analysis of the German Foreign Ministry. Can you tell us about that and the discussions and perhaps disagreements between the individual committee members?

Norbert Frei: Right from the very beginning, there was a lot of agreement about what the commission's job was: not just to investigate how the foreign office functioned and became complicit during the Third Reich, but also to look at continuities beyond 1945 in terms of personnel and mentality. In this sense there was consensus about how we organized our work.

It quickly became clear that, instead of a series of more-or-less autonomous studies of certain aspects, we should aim for a well-rounded and generally accessible book. We oriented ourselves around this goal for the three years we worked on the project. That explains, too, why the commissions' five members – one had to withdraw owing to illness – all offered their unqualified endorsement for the entire final product despite having different areas of responsibility while it was being written. 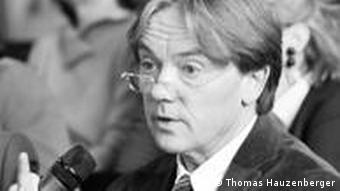 Norbert Frei is Professor of History at the University of Jena

Your study has provoked a surprising amount of hostile response from former civil servants, including those who came after the diplomats in question. Can you discuss the response in generational terms? How do the attitudes of people from the immediate post-war generation differ from those of the so-called 1968ers?

Firstly, you have to recall how positive, indeed enthusiastic the initial reactions to the book were. That was why it had such unexpected success as a publication. In terms of the criticism that gradually developed, it was and still is advanced mostly from former members of foreign ministry, who describe themselves as “mummies.” Obviously they identify with the reconstruction generation after 1945 so strongly that they have difficulty accepting that many people in the preceding generation did not just have model “second” careers in the reconstituted foreign ministry, but also unsavory first ones prior to 1945.

The former can't accept that the fact that such people proved their worth in the postwar German democracy does not wipe their earlier complicity from the historical record. For this reason, opponents of our depiction do not just come from the immediate postwar generation, but people who belong to the "1968 generation" and are now retired. And of course, there are also those in both generations who appreciate our work, but they aren't as vocal.

Many have argued that the postwar West German government wouldn't have been able to function without the expertise of civil servants who had been compromised politically by their involvement with the Nazi regime. How much truth is there in that idea, or is it a total myth?

In light of the massive integrative power of the Nazi regime and the broad support it enjoyed among the German populace until the final months of World War II, it was necessary for the new beginning in 1945 to proceed with social reintegration after a phase of political weeding out and the legal prosecution of Nazi crimes.

The discussion is mostly about whether the political leadership, including the first German Chancellor Konrad Adenauer, who also functioned as West Germany's first foreign minister, were too forgiving toward former Nazi party members. Adenauer once said: “You don't get rid of dirty water if you don't have any that is clean.” A certain murkiness was thus assumed and accepted right from the start. But standards could have been higher without endangering the ability of the foreign ministry to function.

For example, one could have brought back more people who were fired from the foreign ministry in 1933. And someone like Fritz Kolbe, who had consistently resisted the Nazis, was pointedly not rehired.

What would you say is the single most important insight of your study?

That's a bold question with a book of more than 800 pages. But I was astonished how systematically legends were created as early as 1945 and 1946, before the start of the trial of ex-Deputy Foreign Minister Ernst von Weizsäcker in Nuremberg, and how intensively a lot of the younger ex-diplomats worked on those legends.

That was because they knew if they didn't succeed in transferring all the blame for the war and the persecution and extermination of Jews to the SS and the immediate circles around Nazi Foreign Minister Ribbentrop, their own chances of working again professionally were very slim.

More generally: after the collapse of the Third Reich, the fanaticism many Germans felt for Nazism by and large simply disappeared. Why do you think that was so?

Because, unlike after 1918, there was no way to doubt the totality of Germany's political, military and moral defeat.

Jewish organizations have come together in a project to identify and commemorate those buried in Holocaust mass graves across Eastern Europe. Germany's Foreign Ministry has donated 300,000 euros to the project. (21.01.2011)

Staff members at a number of German embassies are under investigation for accepting bribes to issue EU travel visas. The visas are said to have been used in part by human traffickers. (19.12.2010)

As co-author of a new book called "Das Amt und die Vergangenheit" ("The Office and the Past"), US historian Peter Hayes of Northwestern University has gained insight into German diplomats involvement in Nazi crimes. (28.10.2010)