On October 17, 1961, tens of thousands of French and Algerian citizens took to the streets to protest a curfew imposed in Paris and its suburbs. Dozens were shot, beaten to death or drowned in the brutal police response. 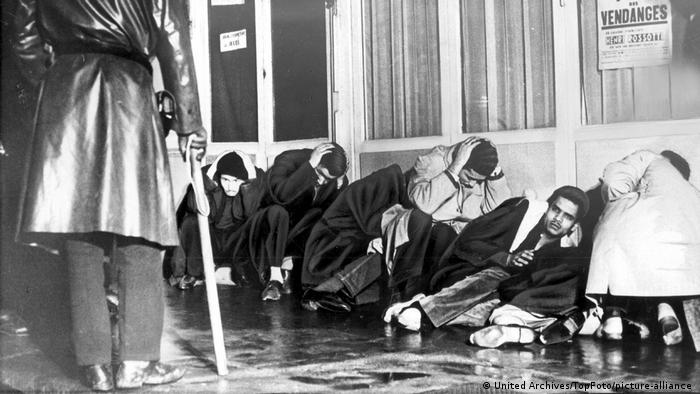 It's thought that at least several dozen protesters, if not several hundreds, were killed amid the police crackdown

On October 17, 1961, supporters of the Algerian independence movement protested a curfew imposed by the Prefecture of Police on Paris and its suburbs that singled out "Algerian Muslim workers," "French Muslims" and "French Muslims of Algeria." When police reacted with brutality, the protest ended in carnage.

"The police created a bloodbath, using everything they could get their hands on, from iron bars to cudgels," Saad Ouazene, one of the 30,000 demonstrators who took part in the peaceful march on Paris, said on French television in the days leading up to the 60th anniversary of the massacre.

The exact number of victims remains unclear to this day. But it is estimated that at least several dozen people — and possibly several hundred — were shot, beaten to death or drowned in the Seine River. More than 10,000 demonstrators were detained for several days.

'Unthinkable' event covered up for decades

The French state suppressed the extent of the violence and the resulting casualties for decades, using amnesty laws to prevent independent investigations. The first official figure released was that three protesters were killed — later, the number was increassed to six. 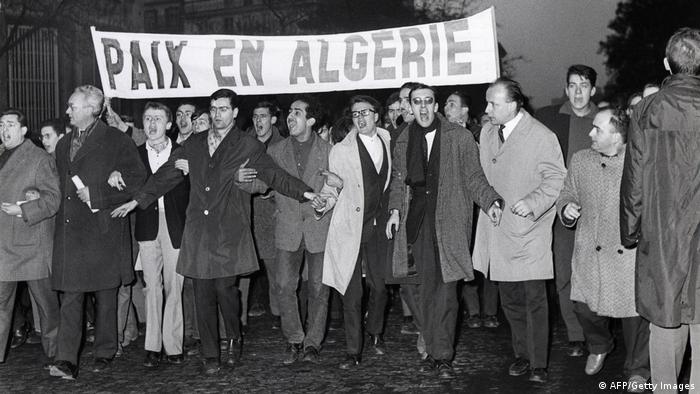 In 1961, Algerians demonstrated for peace in the streets of France

Etienne Francois, a 78-year-old historian and expert on remembrance culture, said there was nothing about the massacre in the media at the time. At the time, he was a student in Nancy and heard about the protest from a lecturer.

"From the Algerian War, we knew that the conditions in Algeria were tough and cruel — but that they could spread to France itself, to the capital, Paris, was unthinkable at the time," he said.

The officials who orchestrated the massacre were not held to account — and went on to enjoy prominent government positions. Roger Frey, the interior minister at the time of the massacre, became president of the Constitutional Council of France. Police Prefect Maurice Papon was appointed budget minister under President Valery Giscard d'Estaing in the late 1970s.

After Algeria gained its independence in 1962, there was a desire in French society to "forget the vile mess of the Algerian War," historian Fabrice Riceputi said. The conflict has only been in French schoolbooks in the past 20 years, and there is still little taught about France's brutal 1830 conquest of Algeria. 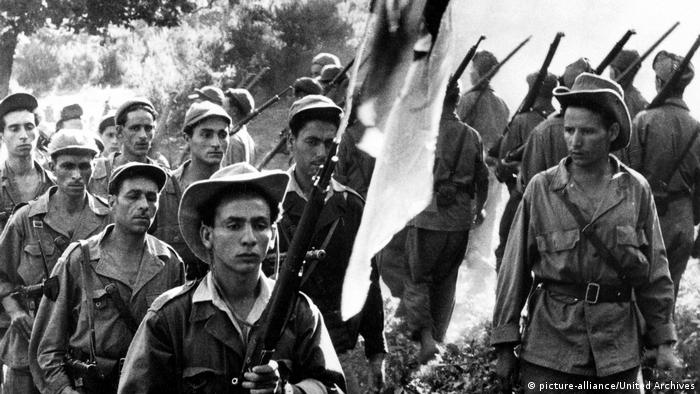 France and Algeria fought a bloody conflict from 1954 to 1962

Riceputi is part of a group of academics, politicians and activists who have called for a major reappraisal of the Algerian War in French society. They want President Emmanuel Macron to recognize the Paris massacre as a state crime.

Francois shares this view. "I personally believe such a classification would be useful as it would correspond to the reality of this massacre," he said.

Macron has criticized colonization more than any previous French president. On a visit to Algeria during his 2017 electoral campaign, he even described the era as a "crime against humanity." He has also previously discussed the massacre, describing in on Twitter in 2018 as a "violent repression."

The relationship between France and Algeria recently sunk to a new low after Macron spoke about the Algerian War and the events of 1961 with a group of young people, descendants of people involved in the conflict. During the discussion, the president suggested that the official Algerian discourse on the uprising was "not based on truths," but on "a hatred toward France." Since 1962, he said, Algeria's political and military leaders have blamed France for the problems.

Algeria reacted by withdrawing its ambassador from Paris and closing its airspace to French military planes, which use this route to supply troops battling jihadis in the Sahel region to the south.

Macron has expressed his desire to be the first French president to reappraise the legacy of his country's colonial history in Algeria and the 1954-1962 conflict. Historians have estimated that more than 7 million people living in France today have links to Algeria, either as the descendants of French settlers who had to leave in 1962 or of Algerians who settled in France for a variety of reasons.

As a starting point, Macron tasked the eminent historian Benjamin Stora, who was himself born into a Jewish family in Algeria and forced to leave after 1962, to write a "fair and precise assessment" of France's colonial legacy in Algeria and the war, which claimed more than 1 million lives, according to some estimates.

Stora presented his analysis earlier this year, recommending that a "memories and truth" commission be set up to collect eyewitness reports. He also called for the archives to be opened and for an official commemoration of the atrocities committed on both sides. October 17, 1961, was one of the dates that the historian said had to be anchored in France's collective memory.

Ahead of the anniversary, Macron reacted to the report by saying there would be "symbolic acts" to acknowledge the crimes but there would not be an official apology or expression of regret. And, indeed, on Saturday Macron attended a ceremony to commemorate the massacre, but his government did not offer a formal apology.

Stora himself has said he does not think that the time is right for apologies, suggesting that remorse could be expressed at the end of the appraisal process but not at the beginning. 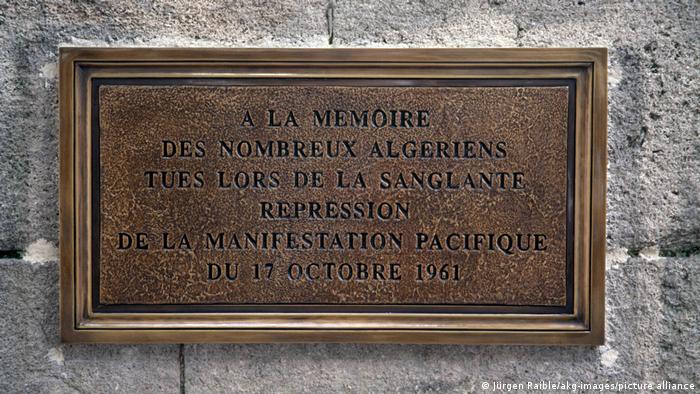 Though the state has prevented the public from coming to terms with the massacre of October 17, 1961, for decades, more than 50 French cities have already installed plaques commemorating the victims of that day.

Macron's predecessor, Francois Hollande, publicly acknowledged the suffering of the Algerian people in 2012 but remained silent about the state's responsibility.

"On October 17, 1961, Algerians who were protesting for independence were killed in a bloody repression," Hollande wrote in an official communique. "The Republic recognizes these facts with clarity. Fifty-one years after this tragedy, I pay tribute to the memory of the victims," he said — leaving his successor to make the next step.

France is facing a second and final round in its presidential election. The winner has the daunting task of reviewing policy on Africa as the former colonies still play a significant role in French national life.

A painful colonial past and strategic ties guide France's low-key response to Algeria's anti-government demonstrations — even as critics at home call on Paris to side with the street. Elizabeth Bryant reports from Paris.