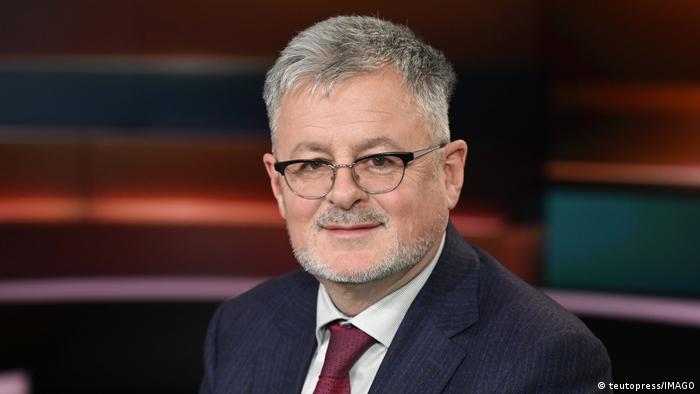 Historian Christopher Clark is also known as the 'Australian European'

Since 2000, the "Medaille Charlemagne pour les Medias Europeens"or the Charlemagne Award for the European Media has been awarded to renowned personalities or institutions for contributing towards European unity and identity through their work in print, television, film, radio and internet.

Previous winners include Dutch journalist Geert Mak (2020/2021), the Erasmus Student Network (2019) and author Ian Kershaw (2018). Even the Eurovision Song Contest, won this year by Ukraine's Kalush Orchestra, was a recipient of the award in 2016.

This year, the award will be presented on May 19 to Christopher Clark in the western German city of Aachen.

The board of trustees of the Charlemagne Award want to honor Clark's achievements as one of the most important chroniclers of European history and for his advocacy for a united Europe and for transatlantic relations. The "Australian European" who was born in 1960, was knighted by Queen Elizabeth in 2015 for his services to Anglo-German relations and is currently professor for modern European history at the University of Cambridge.

Clark's arguably best-known book, "Sleepwalkers: How Europe Went to War in 1914," is an account of the events that led to World War I. The premise of the book is simple: did the Germans start the war that killed over 20 million people, or did most European nations simply "sleepwalk" into a battle of calamitous proportions?

"Sleepwalkers" gained much attention and a wide audience when it was published in 2012 because most readers compared it with Barbara Tuchman's "The Guns of August" (1962), considered until a decade ago as one of the best accounts of WWI.

According to Thomas Laqueur of the London Review of Books, Tuchman mentions the assassination of the Archduke Ferdinand and his wife Sophie in Sarajevo, but does not consider it of more importance than a triggering event. Clark, on the other hand, explains how the war happened. "It was the weakness and unreliability of the alliances, and the lack of certainty about who would be on whose side” that exacerbated the crisis in the summer of 1914, Laqueur writes.

What makes Clark's work so compelling however, is the fact that it is history written in this age. "In his introduction, Clark already makes one of the most interesting points. He reframes the First World War as a "modern event." A modern crisis, in his terms, is characterized through the existence of "suicide bombers and a cavalcade of automobiles," thus reminding us of the acts of terror which so profoundly shook the world during the 2000s," according to the journal Temoigner/Getuigen.

"Iron Kingdom” details the history of Prussia, from its beginnings to the Third Reich, and how it transformed into a major European force by the late 19th century. Clark also discusses the devastations of the Thirty Years' War and the "iron and blood" policies of Otto von Bismarck during unification in 1871 as well as its implications for the 20th century.

In "Time and Power," published by Princeton University Press, Clark demonstrates how the exercise of power is shaped by the perception of time. He draws upon four key figures in Germany, including Friedrich Wilhelm of Brandenburg-Prussia, Frederick the Great, Otto von Bismarck and Adolf Hitler. While Friedrich Wilhelm, for example, rejected continuity with the past and entanglement with tradition, Adolf Hitler sought to evade history altogether, and emphasized racial archetypes and a prophetically foretold future.

In his 2021 book, "Prisoners of Time," a compendium of essays, Clark raises questions about how we think about the past, and the value and pitfalls of history as a discipline. An essay in the book titled "The Dream of Nebuchadnezzar," according to The Guardian, "is a bravura exploration of the role of political power in history…The story is both a fable of power, and as Clark explains, the beginning of the understanding of history as a foreordained sequence of hegemonies."

It's hard to shake that idea, The Guardian quotes from the book, concluding, "The pleasure of Clark's writing is that it embraces an impressive spectrum of thought, without ever losing the sight of the historical truth, or of the difficulty reaching it."

It was time for Europe 'to draw a line': historian Christopher Clark