Using old spy images, scientists have revealed that glaciers are melting at an alarming rate. The only way to avert a huge natural disaster, they warn, would be to cool the earth's temperatures. 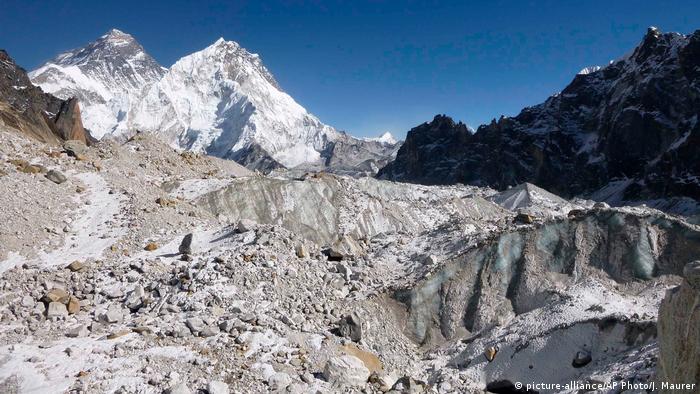 Satellite images demonstrate that the Himalayan glaciers are melting  at twice the speed they were before the turn of the century.

The Asian mountain range has been losing ice at a rate of about 1% a year since 2000, according to a study published Wednesday in Science Advances.

That equates to a decrease in size by more than a foot-and-a-half (50 centimeters) each year — double the rate of the previous 25 years.

The pictures, taken over a 40-year period using Cold War-era satellite observations across India, China, Nepal and Bhutan, reveal a  threat to water supplies for large swathes of the Asian population.

Almost 1 billion people depend on melt-water to sustain their rivers.

The only way to mitigate the problem would be to cool the planet's temperature, scientists concluded. 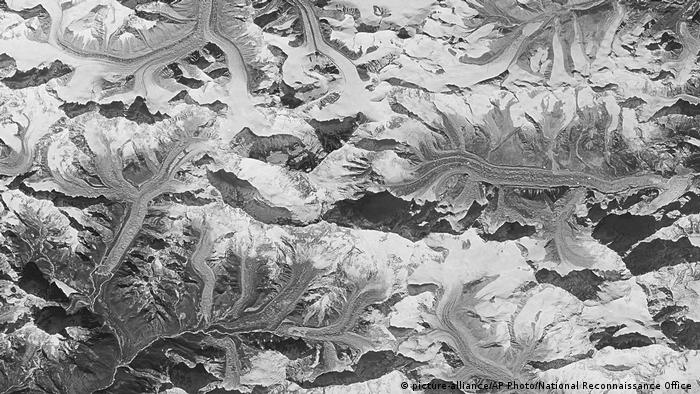 This photo from January 3 1976 photo shows the center of Mount Everest.

"This is the clearest picture yet of how fast Himalayan glaciers are melting over this time interval, and why," said Joshua Maurer, lead author and glacier researcher at Columbia University's Lamont-Doherty Earth Observatory.

"The amount of ice lost is scary but what is much more scary is the doubling of the melt rate," he added.

The revelations come in the midst of climate change talks in the German city of Bonn as thousands of delegates met to discuss ways of implementing the 2015 Paris Agreement. Nearly 200 nations signed the agreement but many are struggling to implement its demands, namely the ambition of fighting climate change via a sustainable low carbon future.

Climate researcher Stefan Rahmstorf told DW that some countries are doing more than others in combating emissions. "Great Britain has gone almost completely coal-free. Emissions have dropped to a level last seen in the 19th century," he said.

According to Rahmstorf, the full costs of the damage done to the climate need to be reflected in product prices. He added: "In most places around the world there is no carbon price so it is basically free to pollute the atmosphere with CO2."

Joseph Shea, a glacial geographer at the University of Northern British Columbia, said the research exposed the real extent of the problem  that even glaciers in the world's highest mountains were vulnerable to the effects of global warming.

Shea was concerned about the repercussions for the Asian people. "In the long term, this will lead to changes in the timing and magnitude of stream-flow in a heavily populated region," he said.

A partial agreement has been reached at the Bonn climate talks on a project protecting forests, seen as crucial in absorbing global greenhouse gases. Negotiators are honing a draft treaty due in Paris in December. (10.06.2015)

The past couple of years will likely go down in history as the ones when climate change really hit. They could also be remembered as the ones in which people worked to stop it. DW looks at some civil society victories. (13.06.2019)