Myanmar's parliamentary elections are the next milestone in the country's ongoing reform process. But while the general requirements for the November vote have been approved, many crucial questions remain unanswered. 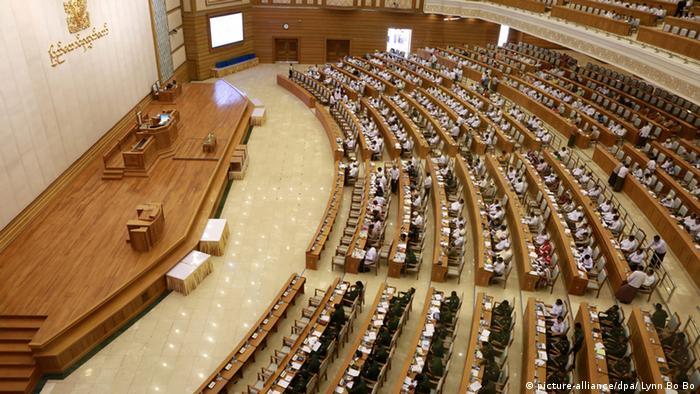 On November 8, more than 50 million people will elect a new parliament in Myanmar. The importance of the election is immense, says Yangon-based journalist Zeya Thu. "The vote will make the country stronger and put it on the right path."

Marco Bünte, a Myanmar expert at Kuala Lumpur's Monash University, also believes the November vote will be extremely significant. "For the first time in many decades there will be a real competition between several political parties and politicians. The election is also crucial for the continuity of the reform process."

Until just a few months ago, it was unclear under what conditions the elections would take place. Moreover, the main opposition party - the National League for Democracy (NLD) led by Aung San Suu Kyi - did not announce whether it would participate in the national poll until early July.

The main sticking point involved the 2008 Constitution, which not only reserves a quarter of parliamentary seats for the military but also bars any citizen with a foreign spouse or children from the presidency. Since Suu Kyi's late husband was a British citizen, and so are her two sons, the Nobel peace laureate cannot not become the country's president.

The NLD saw this as a disadvantage in the upcoming elections. But although Suu Kyi's way to the presidency remains blocked, the NLD announced on July 11 that it would contest the election nonetheless. 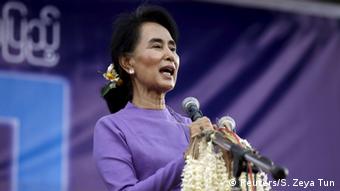 Suu Kyi's way to presidency is blocked by a constitutional amendment

"Overall, the conditions for the November vote seem all right. All key political parties have agreed to participate in the poll," said Bünte. "Details such as voters' lists and the election administration will be revealed in the coming weeks and will determine whether the elections are going to be truly free and fair," he added.

Besides the NLD, the most important political party in Myanmar is the ruling Union Solidarity and Development Party (USDP). Until 2013, it was led by incumbent President Thein Sein, who handed over the party's leadership to parliamentary speaker, Shwe Mann. The two former generals are the best known faces of the USDP. While Thein Sein has not said whether he would run for the presidency again, Shwe Mann has expressed his ambitions on various occasions.

The NLD boycotted the 2010 parliamentary election, which the USDP then won by securing 70 percent of parliamentary seats. International observers were not allowed to monitor the vote. But in the 2012 elections, widely considered to have been relatively free and fair, almost all seats went to the NLD.

If it wins the November polls, the National League for Democracy aims to change the constitution to allow its iconic leader Suu Kyi to be president. But it faces stiff opposition from the military-dominated parliament. (11.07.2015)

Aung San Suu Kyi - 'An icon with a dented image'

Myanmar media facing 'climate of fear' ahead of elections

Threats, harassment, and imprisonment - a new Amnesty International report says Myanmar is intensifying restrictions on the media as the country approaches crucial national elections. Could this impact the outcome? (17.06.2015)

The 2012 electoral results have led many observers to conclude that the NLD is on course for a landslide victory in November's parliamentary polls. But others remain cautious: "Electoral forecasts are difficult and there are no reliable polls," Bünte told DW.

The USDP comes into the electoral race with the advantage of having been largely responsible for the country's opening over the past four years. However, many are still unhappy about its perceived proximity to the previous military-led government, said Thu.

The NLD, on the other hand, has the advantage of being widely regarded as the party representing the new beginning so many have long been yearning for. "People want change, the faster the better," said Bünte, stressing, however, that it was impossible to exactly forecast how the parties would ultimately fare in the poll.

In minority areas, which make up about a third of the total population, so-called ethnic parties could win a majority. "This could lead to a fragmentation of parliament, possibly led by the NLD, followed by the USDP and an array of ethnic parties," said Bünte.

In a recent BBC interview, Army Chief Senior General Min Aung Hlaing said the military would not step back from politics until a peace deal is reached with all the country's ethnic armed groups. "It could take five years or 10 years - I can't say," he told the broadcaster. He added, however, that the military would respect the results of the forthcoming general election even if the opposition won.

Thu believes this to be true: "It seems the military will accept the election results as long as they are represented in parliament and can keep their 25 percent blocking minority," the analyst told DW.

Myanmar's armed forces see themselves as a stabilizing force which stands above politics and whose task it is to guarantee national unity. "The military, which distrusts all politicians, is trying to impose its view of a 'disciplined democracy,' which only grants limited space for an opposition," said Bünte. 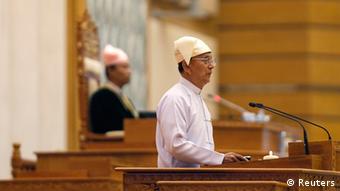 A good example for this is the fact that a constitutional amendment recently introduced by the USDP was blocked by the military representatives in parliament. The amendment was meant to change the appointment process of the chief ministers of the 14 administrative districts, who, to that point, were directly appointed by the president without any involvement of the regional parliaments. The USDP wanted to change this in order to foster trust between the central government and the regions. But the military wanted no part in it.

The upcoming election, which will not affect the military's dominant position, will follow the controversial first-past-the-post voting system, meaning that only the person with the most votes in a constituency will be taken into account, while the votes cast for the other candidates will play no role.

This means that the representation of parties in parliament many very well differ from the actual number of votes won by the political factions in the nationwide poll. A proposed electoral reform was turned down last December. The USDP had supported the move expecting electoral gains while the NLD rejected it fearing losses.