Serious flooding has wreaked havoc in parts of Mozambique, as houses collapsed in many areas. Rescue efforts are underway to help people trapped by rising floodwaters in the country's northern region. 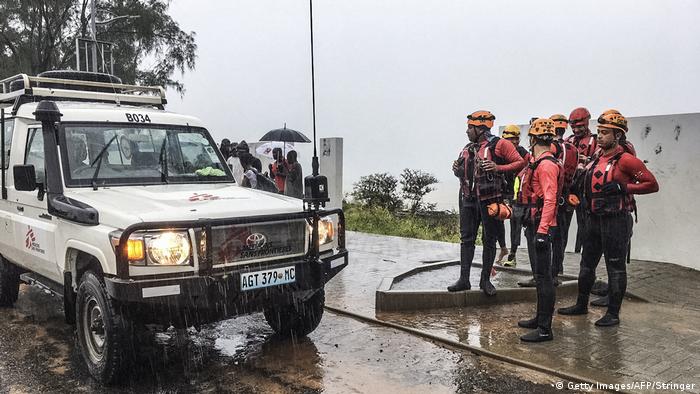 Heavy rain and flooding in northern Mozambique hampered rescue efforts on Monday, as the death toll from Cyclone Kenneth rose to 38.

The storm has damaged thousands of homes since making landfall in the southeast African country five days ago.

The UN Office for the Coordination of Humanitarian Affairs (OCHA) said many houses have collapsed as a result of rising floodwaters in the northern region's main city, Pemba.

Mozambique's government urged people in flood-hit areas to seek higher ground immediately to minimize the risk of drowning. An estimated 160,000 people were at risk from the cyclone, which is the second to hit the country in six months.

Kenneth is expected to drop more rain than Cyclone Idai, which tore through the region in late March — potentially twice as much.

According to figures announced by the government on Monday, at least 38 people died as a result of the current storm — up from an earlier estimate of five. Nearly 35,000 homes have been either partly or completely destroyed.

Aid organizations have described "total devastation," raising concerns that residents in inundated communities will be left exposed and hungry as waters rise.

Further heavy rain is forecast over the next several days.

"It is now raining heavily in Pemba, Cabo Delgado, and some parts of the city are already flooded," said Saviano Abreu, spokesman for OCHA.

"We are unfortunately expecting devastating floods here in Pemba. A search-and-rescue team is being mobilized," Abreu added.

The World Meteorological Organization (WMO) said there was no previous record of two storms of such intensity striking Mozambique in the same season.

After Cyclone Kenneth, Mozambique hit by rain and winds

After hitting the northern coast of Mozambique, the second storm to strike the southern African state in five weeks is threatening days of rain. It is the first cyclone to hit Cabo Delgado province in 60 years. (26.04.2019)

A new deadly storm hit northern Mozambique more than a month after Cyclone Idai ravaged the country. Homes were destroyed and power lines cut in the city of Pemba, with UN officials warning of "massive flooding." (26.04.2019)

South Africa is grappling with one of the biggest natural disasters in the country's history. Floods have killed more than 400 people and destroyed thousands of homes.

Mozambican city devastated by flooding rebuilds for the climate crisis 26.05.2021

Beira is one of the world's most vulnerable cities to climate change. That's why two years after devastating Cyclone Idai, it is rebuilding with future floods in mind.

Extreme weather is occurring more frequently worldwide. Rising sea levels and heavy rain are causing devastating floods. Most researchers agree that these are the consequences of climate change.