Has Trump fulfilled his promise to revive US manufacturing? | Business | Economy and finance news from a German perspective | DW | 05.12.2019

Has Trump fulfilled his promise to revive US manufacturing? 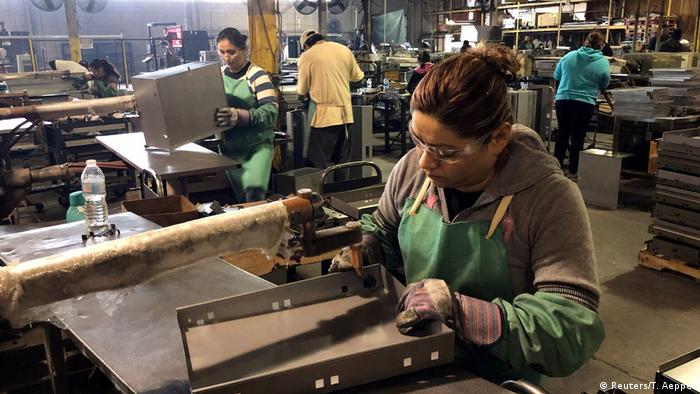 Reviving American manufacturing and bringing back factory jobs has been a central element of Donald Trump's political identity since he announced his candidacy for the US presidency in 2016.

Trump had sharply criticized past administrations for allowing American companies to move production to places like China and Mexico and vowed to bring it back to the US. Even though Trump presented himself as a champion for industrial revival, experts say his record on this front has been poor.

"There has not been any revival of manufacturing employment in the US," David Dollar, a senior fellow and leading expert on US-China economic relations at the Brookings Institution, told DW. "Manufacturing accounted for 8.1% of civilian employment when Trump was inaugurated, and it is 8.1% today," he said.

Data released by the Institute for Supply Management (ISM) this week showed that manufacturing activity in the US contracted for a fourth straight month in November 2019, with new orders slumping to around their lowest level since 2012.

"Trump's trade wars are almost singlehandedly to blame for his failure to do more for the manufacturing sector," Jacob Funk Kirkegaard, a senior fellow at the Peterson Institute for International Economics, a Washington-based think tank, told DW, referring to the series of tariff conflicts the US president initiated since coming to office.

"Despite a record peacetime fiscal stimulus, continued low interest rates and a recent very large corporate tax cut, US business investment has remained very low, as trade uncertainty has weighed on US CEO risk appetite and company profitability has stagnated."

While Washington's trade spat with Beijing has led to some relocation of production from China to places like Mexico and Vietnam, it hasn't brought production back to the US, said Dollar. "Meanwhile, many US firms rely on components and machinery from China, so the tariffs have been a burden for them."

But Marick Masters, a business professor at Wayne State University who specializes in labor issues, told DW that Trump's record on jobs "is generally a positive one" and that his trade policies have "considerable political appeal" in the US. "Trump appeals to people's frustration with the norm of not challenging our trading competitors. His willingness to hit back strikes a positive cord among many."

How important is manufacturing?

Manufacturing today makes up a smaller share of the US economy and labor market than it used to. The sector made up 11% of the US GDP in the second quarter, according to data from the US Commerce Department.

Despite the decline in its share, the sector is considered extremely important for industrial innovation and as a source of well-paid jobs.

Peter Navarro, head of the White House National Trade Council, argues that manufacturing has a high employment multiplier, meaning manufacturing generates a large number of additional jobs in other fields.

According to the National Association of Manufacturers, for every dollar spent in manufacturing,another $1.81 of value is added elsewhere in the economy, the largest "multiplier" of any economic sector.

Manufacturing jobs also tend to pay higher wages than other jobs that require the same level of education, concluded a 2018 study by the US-based Economic Policy Institute.

During his presidential campaign and since coming to power, Trump has vowed to put an end to the long-term decline in industrial employment and revitalize the traditionally manufacturing-intensive Rust Belt states in the American Midwest.

That's a reason why areas with manufacturing-heavy local economies overwhelmingly supported Trump in 2016. And since he became president, companies have added more than 400,000 manufacturing jobs across the United States, according to the White House website.

But the current slowdown and business uncertainty may adversely affect support for Trump in the Rust Belt, say analysts. Major companies like John Deere and Caterpillar have been downbeat about their outlook, while fears grow over potential layoffs.

The manufacturing woes could have a decisive impact on Trump's reelection chances, said Kirkegaard. "Trump must again win the upper Midwest states he very narrowly won in 2016 to be reelected. But with the local Midwest manufacturing in recession and shedding jobs, this will be difficult for Trump," he pointed out.

Across the nation, the manufacturing slump is hitting Republican counties hardest, according to data from the Brookings Institution. It has potential to sway voter opinion in key battleground states like Wisconsin and Michigan, where manufacturing is estimated to account for about one in every five jobs in some counties.

"Trump's reelection depends heavily on a favorable state of the economy and the perceived extremism of his opponent in November," said Masters.

"If the economy slips into a recession, with rising unemployment, then Trump's reelection chances will suffer," he noted, adding: "If the economy continues to perform well and if the Democrats nominate a hard-core leftist, Trump's chances of being reelected rise."

While weakening business confidence and softening global demand have hit American factories hard, the trade conflicts and rising protectionist tendencies have also taken a toll on the growth prospects of other countries worldwide.

Trump, meanwhile, has been attempting to shift the blame for the manufacturing slowdown toward the Federal Reserve, the US central bank.

The president has sharply criticized the Fed's monetary policy and repeatedly argued that its interest rate hikes have elevated the relative value of the dollar, which makes US goods more expensive overseas.

In an effort to boost economic growth, Trump has demanded the Fed to lower interest rates, even though experts say the problems are related to trade and not monetary policy.

"Manufacturers are being held back by the strong Dollar, which is being propped up by the ridiculous policies of the Federal Reserve," Trump tweeted on Monday.

"The Fed should lower rates (there is almost no inflation) and loosen, making us competitive with other nations, and manufacturing will SOAR! Dollar is very strong relative to others," he added.

In August, he tweeted that the Fed's policy is "making it more difficult for our great manufacturers like Caterpillar, Boeing,…"

In October, the Fed cut interest rates for the third time this year and signaled a pause in the easing cycle that started in July when it reduced borrowing costs for the first time since 2008.

Despite the weakness in manufacturing, Brookings analyst Dollar said, the overall American economy is performing alright. "Employment is overwhelmingly concentrated in services, and those sectors continue to grow moderately well," he said, adding: "The overall growth of the economy probably will have more effect on the election than what is happening in manufacturing."