The upturn in the Japanese economy in the current fiscal year's third quarter is a positive sign, but overall the country's economy presents a gloomy picture. How does it reflect on the premier's Abenomics? DW examines. 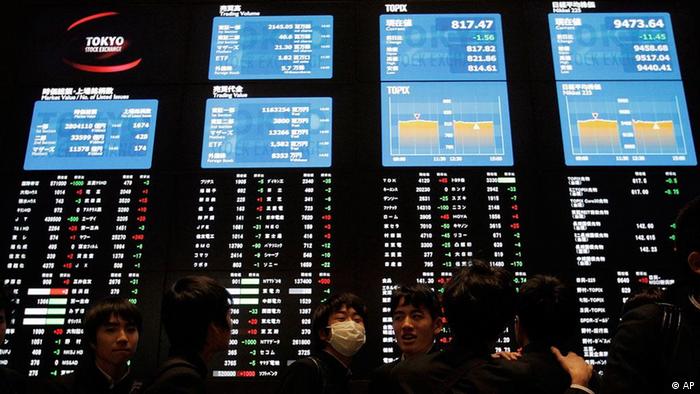 The main economic goal that Abe had set for his administration when he became prime minister in December 2012 was to hit the 2-percent inflation mark. An array of monetary policies, including printing more money and lowering the interest rate, were introduced to achieve this ambitious target.

Japan's central bank has had to admit that its goal of pulling the nation out of its deflationary spiral is not achievable during the term of the lender's current governor. The announcement is a blow to Abenomics. (01.11.2016)

Fresh economic data from Japan have economic pundits wondering whether Prime Minister Shinzo Abe can afford another sales tax hike planned for April next year. But Abe has confirmed the tax hike will push through. (29.03.2016)

The government had hoped that the flow of cash would lead to a cheaper yen, which in turn would help boost Japan's exports. It was also believed that higher sales would attract more investments by the Japanese companies and would translate into an economic expansion, more jobs and higher wages. This, subsequently, would lead to higher consumption and inflation.

The inflation rate did rise above two percent between April 2014 and April 2015 but only because of the three-percent hike in the consumption tax. Subtracting that effect, the inflation rate has been very low, and has been falling for seven consecutive months as of September 2016.

This happened despite the fact that the Abe administration has gone to lengths to try and meet the 2-percent inflation mark. The Bank of Japan (BOJ) purchased government bonds and assets totaling around 70 percent of the GDP. The US Federal Reserve and the European Central Bank's balance sheets both stand below 25 percent of their respective total outputs.

This saw record corporate earnings for Japan's export-oriented companies. Furthermore, the BOJ lowered the interest rate below zero in January 2016, becoming only one of the five central banks worldwide to implement the unconventional measure, hoping to boost investments.

But the benefits of these policies have not trickled down to the Japanese consumer. Despite Abe's repeated calls that Japanese companies use their earnings to increase wages for their employees, this hasn't really been done.

Luc Everaert, head of the International Monetary Fund in Japan, says the salary increase in the past years has been inadequate. In August, he urged the country's authorities to pursue "policies to support wage increases in Japan."

"Overall, the monetary easing has missed its target," Hanns Günther Hilpert of the German Institute for International and Security Affairs, told DW. "Inflation has decreased, the economy hasn't seen enough stimulation, the pay hasn't improved much, and investments have been more or less stagnant," Hilpert said.

Earlier this month, the Bank of Japan abandoned achieving a 2-percent inflation target during the term of its current governor, Haruhiko Kuroda.

The second Abenomics target, the fiscal expansion, has also faced hurdles. In 2013, and again this year, PM Abe announced massive stimulus packages worth almost 500 billion euros. Initially meant to provide relief in the areas affected by the massive 2011 earthquake, the focus of the packages has now shifted towards welfare spending and infrastructure.

The government's stimulus packages, however, have resulted "in a further deterioration in state finances without producing any long-lasting effects on the economy in return," according to the European Parliament's recent analysis of Japan's economic policies.

Japan's national debt has now hit the highest level ever recorded in the country's history, marking 248 percent of Japan's GDP at the end of 2015. It is expected to spike further by the end of the current fiscal year.

In June 2014, Abe announced a wide-ranging package of reforms meant to enhance the competitiveness of Japanese companies and tackle the demographic challenges of his country's aging population. A year later, the premier expanded on his first two policies of monetary expansion and fiscal stimulus and at the same time worked on the structural reforms.

"Some issues related to structural reforms have been addressed. These include an improvement of corporate governance to facilitate the much-needed restructuring of the economy," said Hilpert, adding that the agricultural and energy sector have been liberated to enhance their ability to compete globally. But there is still a long way to deal with the demand side of the economy, the expert underlined.

At the root of demand issue is the shrinking population and income disparity. "And these problems have not been dealt with properly" Hilpert said. 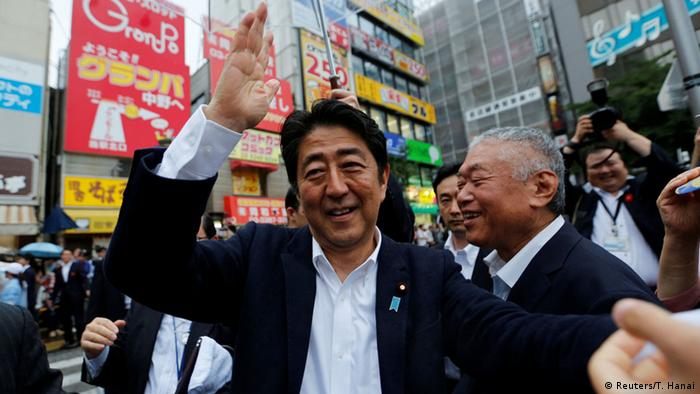 Abe had hand-picked Kuroda, a former head of the Asian Development Bank, to help drive his Abenomics growth blitz

The so-called "Womenomics," aimed at increasing the participation of women in the workforce and thus countering the demographic shifts, has yielded some positive results.

"There are more lower-skilled female workers entering the workforce, albeit at a slow pace," Robert Dujarric, Director of the Institute of Contemporary Asian Studies at the Tokyo campus of Temple University, told DW.

"But so far, there are no efforts to promote women into higher positions," Dujarric added.

Tax incentives still encourage Japan's women not to work if their spouses earn a good salary. Although an amendment in this system was debated in parliament, "the conservative mindset of Abe and his party will not want to change this concept," said Hilpert.

"We can say that PM Abe has definitely not plunged the Japanese economy into recession," underlined Hilpert. "But we can also say that he has not been able to achieve the targets that he had set for himself when he introduced Abenomics. Also, his economics policies will not be sufficient to bolster the country's economy in the long run."