Has COVID fueled racism? Germany sees dramatic rise in complaints | Germany| News and in-depth reporting from Berlin and beyond | DW | 11.05.2021 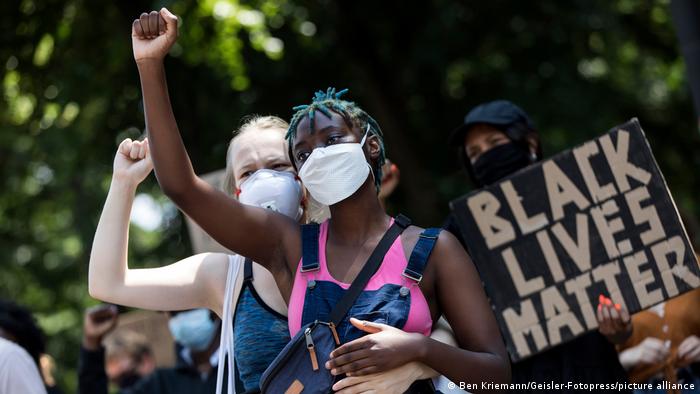 Anti-racism protesters have been taking to the streets in Germany

The coronavirus is putting Germany to a severe test. For many, the pandemic has mutated exposed a litany of administrative confusion and political incompetence. While the population vacillates between collective burnout, a mixture of anger and despair, and the hope that the vaccine will soon successfully defeat COVID-19, there is evidence that the virus has not only exposed social problems — it has exacerbated them.

The latest report by Germany's Federal Anti-Discrimination Agency (ADS) sees the pandemic as a major driver of discrimination, social marginalization, and racism, which takes up a lot of space in its annual report for 2020, released on Tuesday.

Racism at the workplace

Can businesses aid in the fight against racism?

In 2020, the total number of all requests for initial legal aid for discrimination cases rose from 3,580 to 6,383 cases in the previous year, an increase of 78.3%. In particular, the calls for help because of discrimination "on the basis of ethnic origin, or on racist grounds," as it says in the annual report, increased significantly with 2,101 requests. In 2019, there were only 1,176 requests.

"We have never seen such a drastic increase in requests for advice," said the acting head of the Federal Anti-Discrimination Agency, Bernhard Franke, presenting the data development in Berlin. "The trend of an increase in complaints of racial discrimination, in particular, has intensified in the year of the horrific attack in Hanau and the Black Lives Matter protests."

Racism takes away people's dignity, and "divides our society," Franke warned. People who experience racism and discrimination, and then watch as they face no consequences, "for them, basic trust in the protection and the solidarity of the state and society crumbles." That's why, he argues, protection against discrimination should never be ignored, even during a pandemic. "Because it guarantees participation and equality, and therefore social solidarity."

COVID-related discrimination cases occasionally even overloaded the anti-discrimination agency. "This meant that we had to temporarily discontinue our telephone advice service because of the high number of requests," Franke explained. Now, those seeking advice can only contact the ADS via a consultation form or in writing.

The report details some of the complaints: "Franziska S. goes to the hardware store with her two children. The children, seven and nine years old, cannot go to school because of the protection orders. At the entrance to the DIY store, the mother is told that she is only allowed into the store without her children because they are 'special pandemic drivers'."

Another case that apparently occurred during the original outbreak in Wuhan, China, was reported by an Asian-German, who was expecting the delivery of a package: "When the parcel delivery man arrives at her front door with the delivery, he suddenly refuses to hand over the package to her. When the German-Asian woman insists on taking it, the delivery man pushes her away with the words 'Sching Schong' and takes the package back."

Eva Andrades, director of the Anti-Discrimination Association Germany (ADVD), which represents local advice centers around the country, told DW that counseling centers "could not follow up on all counseling requests."

What does it mean to be Black in Germany?

But she also sees a positive sign in the unexpectedly high demand. Last year's protests against racism, resulting especially from the public debate that ensued from the Black Lives Matter movement and the deadly attacks in Hanau, have made the issue of discrimination much more visible. "It has given a push for more people to contact the counseling services," she said. "Perhaps it meant that many people learned there was even a law that helps them stand up against racism and discrimination in the first place."

At the top of the list of requests for advice are inquiries from the disabled and chronically ill, which make up some 42% of the total calls for help, or 2,631 cases — almost a threefold increase compared with the previous year. Here, too, the pandemic played a central role. "Unfortunately, the often understandable concerns of people with disabilities who could not wear masks were undermined by so-called corona-deniers, who sometimes carried dubious medical certificates with them," explained acting ADS director Franke. This, he said, has led to blanket denials of access to stores for people with disabilities "who cannot wear masks."

Meanwhile, some 17% of people turned to the Anti-Discrimination Agency because they felt disadvantaged due to their gender. Nine percent of the requests for advice concerned discrimination on the basis of age. Five and two percent respectively were based on religion or belief, while four percent on sexual identity.

Racism in Germany 'an issue for society as a whole'