Harry and Meghan polarize media at home and abroad | Europe | News and current affairs from around the continent | DW | 09.03.2021 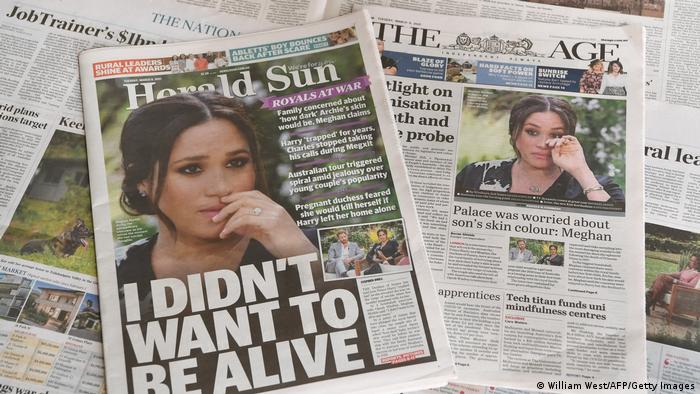 The interview given to US talk show host Oprah Winfrey by the Duke and Duchess of Sussex about their time in the British royal family has made waves at home and abroad and aroused a wide range of media responses after it aired in the US on Sunday.

Even within the United Kingdom, opinions were divided amongst commentators.

The Daily Mirror made it out to be the worst crisis in decades: "The couple spent two hours on TV desecrating their relationship with the family, accusing them of racism, peddling lies and ignoring the duchess' desperate cries for help as she contemplated suicide while pregnant. Insiders said the devastating interview with US chat-show queen Oprah Winfrey left the royal family facing its toughest test in 85 years, when Edward VIII became in 1936 the first English monarch to voluntarily abdicate the throne to marry US socialite Wallis Simpson."

The Daily Mail took a similar line. On its front page on Monday, it asked: "What have they done?" and called the interview a "ruthless stab at the heart of the family." "For someone whose stated ambition is 'to build a better world, one act of compassion at a time,' this was a remarkably brutal and calculating display," the paper wrote, citing phrases taken from an open letter published on the website of the couple's non-profit organization Archewell.

Meanwhile, The Guardian called the claims "devastating," writing: "But this is not just a crisis for the royal family – but for Britain itself. (...) Trapped in denial — about everyday racism, structural racism, slavery and empire — there are parts of British society that appear incapable not just of change but even of its necessary precursor: honest self-reflection."

US applauding Meghan for her courage

On the other side of the ocean, the issue was treated more positively, with even US President Joe Biden commenting, saying it must have taken "courage" for Harry and Meghan to speak out.

The New York Times​​​​​​​ was hopeful about what might come for Prince Harry after the interview: "Freed from the constraints of not being able to confront racism head-on might mean that he will dedicate his life to dismantling it, not just out of necessity, but also as a way of writing a new chapter in his family's history, and bequeath his children a legacy of antiracism." 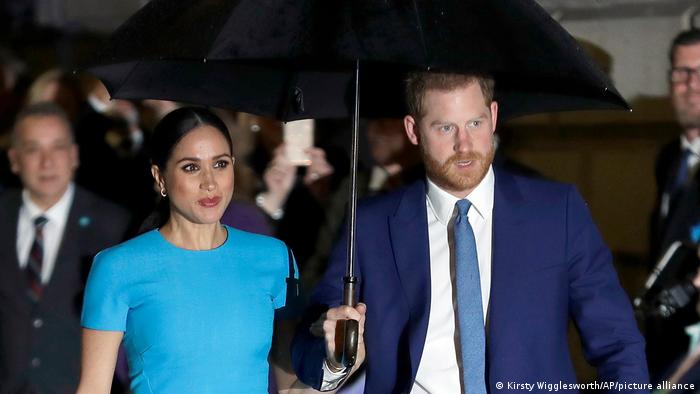 In their interview, Meghan and Harry accused the British royal family of having been racist

The Los Angeles Times, a newspaper in Harry and Meghan's current home state, California, criticized both the palace and Meghan: "Call me crazy, but if you can afford a $14.5 million, seven-acre Montecito estate, and you've got yourself a fat deal with Netflix, maybe you can afford to pay for your own personal protection even though your feelings are hurt? And I have trouble believing that a 30-something professional woman used to being in the public eye would not be able to get psychological help on her own, but as I say, learned helplessness seems to be part of the royal DNA."

In mainland Europe, the German magazine Der Spiegel wrote: "The reproaches of the Duchess and the Duke of Sussex — as hard as it might be to prove them — hit a nerve in Great Britain in the year 2021. The royal palace might have a problem with racism. The kingdom itself certainly does."

In France, Le Parisien wrote on its front page that "war has been declared," adding that the "current crisis might not undermine the love of England for its iconic and nonagenarian monarch. It has forgiven her so much already. But the crown will be heavy to carry for her heirs."