Thomas de Maizière has visited a processing center for migrants coming to Germany from the Balkans. Germany's Police Union has called on him to relieve their "catastrophic" overwork due to the migrant crisis. 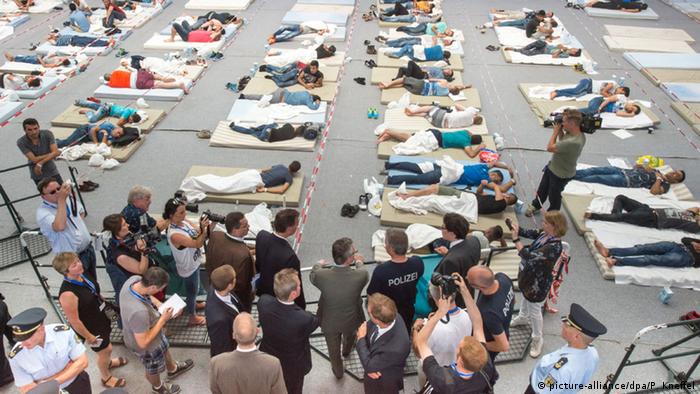 Germany's Interior Minister Thomas de Maizière was in the Bavarian town of Deggendorf on Tuesday to visit a processing center for migrants seeking to enter Germany through the Balkans. De Maizière, who has been outspoken about reducing the number of asylum applications from Kosovo, Serbia, and Albania, visited the rural town near the Austrian border to acquaint himself with the procedures of the center.

Made up of 50 containers turned into offices, the office photographs, registers, and performs medical examinations on some of the hundreds of migrants detained each day on Bavarian trains and highways.

Germany faces an unprecedented influx of migrants from war-torn areas in the Middle East and Africa, and has sought to reduce migrants from eastern Europe by declaring some nations there "safe" countries of origin and turning their citizens back. Germany expects to process around 450,000 asylum applications during the course of 2015.

Later on Tuesday de Maizière was set to meet with the German Police Union, which has called for the reintroduction of international borders within Europe, and more staff to deal with the rising number of refugees.

"From a policing point of view, a return to border controls would be the best of all measures," Rainer Wendt, union chairman, told a local newspaper. Europe abolished passport checks inside what is called the Schengen Zone - 26 EU member countries alongside Switzerland, Norway, Iceland, and Liechtenstein. Although migrants are legally bound to remain in the first EU country they set foot in, the lack of borders within the Schegen area prompts them to try their luck on international trains or roads to reach destinations thought to be most favorable.

As a result, police have stepped up passport checks in border areas and on European flights. The union had said it planned to show de Maizière the "catastrophic conditions" for overworked police due to the demands of increased migration.

Italian police have arrested five men accused of trafficking migrants. The suspects are thought to be connected to the presumed drowning of more than 200 people in a deadly shipwreck. (07.08.2015)