Hamburg, the Bundesliga dinosaur, stares extinction in the face

Despite being the better team, Hamburg failed to win against Mainz due to a man-of-the-match performance by a Bundesliga debutant. The fans are already thinking of life in the second tier of German football. 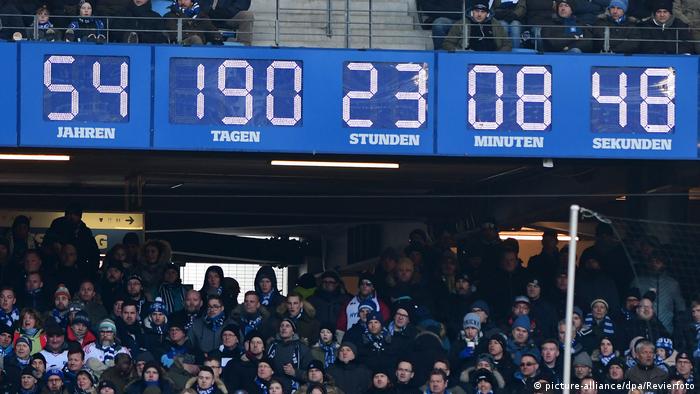 Hamburg's 'in the Bundesliga for....' clock in its stadium is approaching 55 years now — but will it get there?

It's been a tense afternoon at the Volksparkstadion. Hamburg's fans knew that only a win against Mainz would really suffice in the club's battle to avoid its first ever relegation from the Bundesliga. Yet it seemed like they didn't really believe HSV could dodge the drop, even if they got three big points against the guests from the Rhineland.

Fan conversations before the game were about the potential derby against local rivals St. Pauli in the second division next season, about the post-relegation rebuilding mission, or about whether those in charge should keep their jobs. In other words, about anything but the game itself. When the HSV team bus arrived, no fans had chosen to wait to support the players and spur them on. 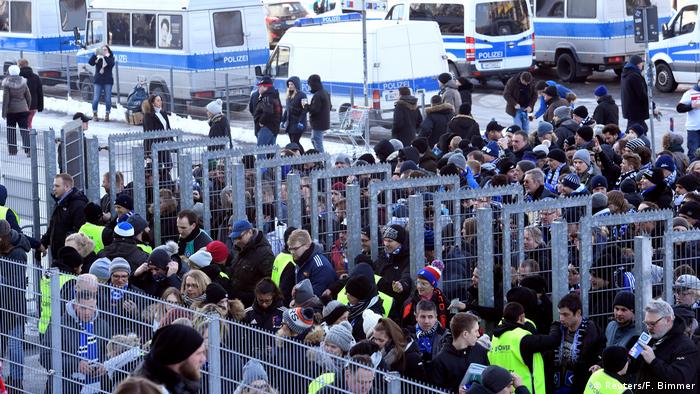 However, it was a different ball game on entering the ground. Hamburg's hardcore "ultras" had pulled a trick on the police, deciding to stay away from the Nordtribüne, where they usually form the most vocal part of HSV's support. If the atmosphere during the first part of the game was anything to go by, it worked. Noise levels were quickly rising in support of the local team, despite it being about 3,000 people short of HSV’s usual attendance average; briefly, change seemed to be in the air.

Like the fans, Hamburg's players seemed raring to go, outplaying Mainz in every department early on. They were led by 19-year-old winger Bakery Jatta and surprise inclusion Sven Schipplock up front, who very nearly opened the scoring within five minutes.

But despite controlling the game, HSV were still missing the final piece of the puzzle — namely a goal. Florian Müller made his debut as keeper for Mainz with both Rene Adler and Robin Zentner out injured; in keeping with HSV's luck of late, Müller was man of the match. The 20-year-old managed to pull a few saves from one-on-ones and looked commanding in the box, the highlight being a 61st-minute penalty stop. Fans and journalists alike were shaking their heads in disbelief at this point, as a more familiar sense of doom descended over the stadium. Coach Bernd Hollerbach waved his hands in despair. It would become Hamburg's 12th match without a win, six of them under the former Hamburg player. 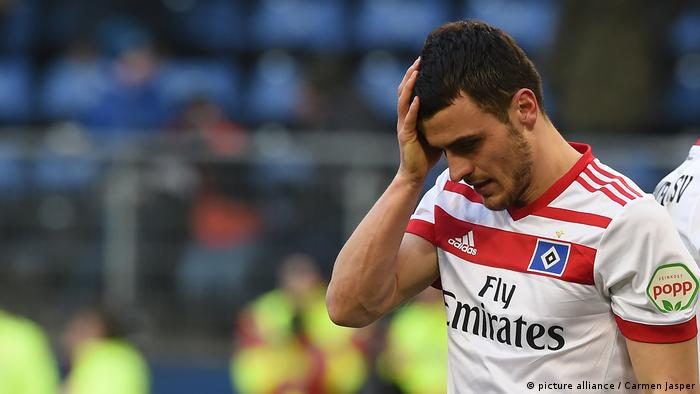 Once Kostic missed with a weak penalty, you sensed it wouldn't be HSV's day

After the final whistle was heard, the mood at the Volksparkstadion became even grimmer than during the build-up. "Relegated, relegated," the HSV faithful barked at their own players, a chant usually reserved for visiting teams who are battling the drop. Boos were heard from across the stadium as soon as the stadium announcer said that Hamburg "played so well."

Hamburg's sporting director Jens Todt and coach Bernd Hollerbach had to face the media. It felt like they didn't want to be there. While rolling out the old platitudes about fighting for as long as survival is still mathematically possible, their expressions said so much more than their words could. They seem to know it's most likely over, and that their names will forever be remembered as those who got HSV relegated for the first time in the club's history.

HSV travel to Munich to play Bayern next week, so bouncing back is not going to be easy. 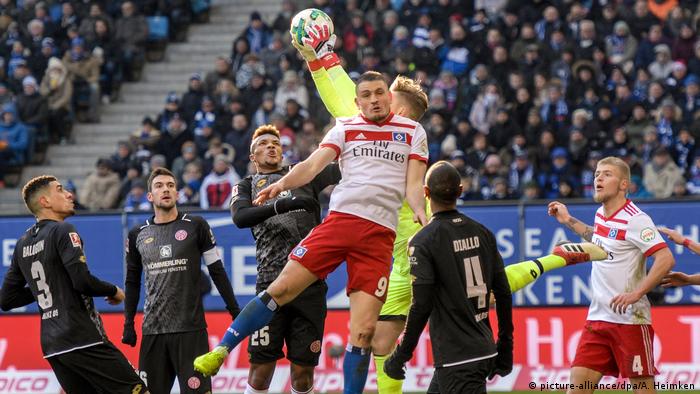 HSV must have been hopeful when they saw Mainz resort to their third-choice keeper, but Florian Müller played a blinder

Walking back to the train station, fans' conversations were, again, about anything but the game itself. "It’s over. Whatever. St. Pauli away next season!" shouted one fan on the train.

Perhaps the most appropriate summary of the mood at HSV at the moment was already written a few days before the 0-0 with Mainz even kicked off. In an article aptly headlined "The Dinosaur is beyond saving," Germany’s Kicker magazine wrote the following: "HSV is lacking in just about every department: Calmness, the backing of the supporters, and most of all — quality in the squad."

Even if it was one of their better performances of the season, the goalless draw with fellow strugglers Mainz still reflected every word.