After beating out Berlin, Hamburg has been officially accepted by Germany's Olympic Committee to bid for the 2024 games. The country's famous port faces competition from Rome and Boston. 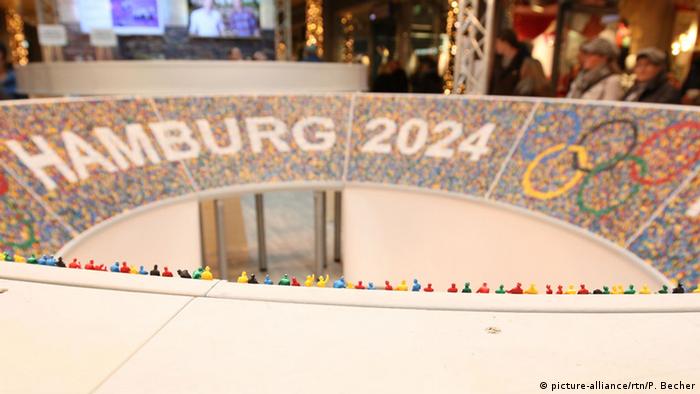 Hamburg was officially named as Germany's bid for the 2024 Summer Games after the country's Olympic committee (DOSB) unanimously accepted the board's proposal on Saturday.

"We are united in our longing for the Olympics," Alfons Hörmann, DOSB president told the organization's membership. "We can and want to be a role model for a new Olympic and Paralympic concept of the future."

Hamburg emerged victorious from the competition with Berlin on Monday; uncofirmed resports in the press said that Hamburg won by four votes to three, with three abstentions, including Hörmann, on the 10-person panel. Despite some local opposition, Berlin had hoped to write new Olympic history after the notorious 1936 Summer Games in Hitler's Germany.

Hamburg hopes to use well-placed land near the large harbor to build some of the venues as part of its compact inner-city concept, but will need to hold a municipal referendum before September. Officials are eager to cement support ahead of making its bid to the International Olympic Committee (IOC).

Part of the plan is to use the Kleiner Grasbrook area, which is technically an island but within easy walking distance from downtown, for the Olympic park. Hamburg's proposal also includes an opening ceremony held in the city and on the water instead of in a stadium.

The only other official applications that have been launched are Rome and Boston, with Paris, Doha, Istanbul and Baku also seen as possible contenders ahead of the September deadline.

The IOC will make a decision in 2017. Germany hasn't hosted the Summer Olympics since the Munich games of 1972. Both Berlin and Leipzig were rejected in the most recent German attempts for the games, and Munich also failed in its bid for the 2018 Winter Olympics.

Germany's Olympic Sports Confederation is recommending Hamburg as the country's sole representative for the 2024 Olympic bidding process. With the decision, the German capital Berlin misses out as a possible candidate. (16.03.2015)

Selecting Olympic host candidates with the environment in mind

Which city will the German Olympic Sports Confederation choose as candidate for the 2024 Games? If issues like sustainability and climate protection play a role, Hamburg takes the lead. But Berlin is catching up. (16.03.2015)