Hamburg concert hall celebration marred by protests and anger | Germany| News and in-depth reporting from Berlin and beyond | DW | 29.05.2010

Hamburg's new iconic concert hall is supposed to become a landmark, but protesters at the building's topping-out ceremony Friday slammed the project's cost. On Saturday, the site is partially open to the public. 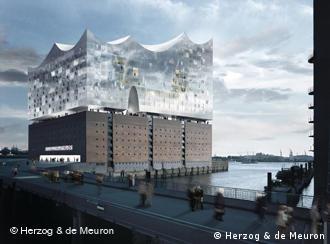 This image show the completed concert hall with its iconic design

Hope clashed with pessimism in Hamburg on Friday as the ambitious and controversial Elbphilharmonie concert hall project celebrated the construction of its highest point in a topping-out ceremony.

Hamburg Mayor Ole von Beust spoke to about 1,200 invited guests on a viewing platform 37 meters in the air. What should have been a celebratory speech was somewhat muted, as von Beust found himself defending the concert hall against its detractors, who have slammed the mounting costs, budget overruns and delays.

As he spoke, workers lifted up a wreath to the unfinished high-point of the building 110 meters above the water.

"Despite all of the difficulties, we made the right decision on this as the millennium began," he said. "This is not an easy construction project. But I say to the critics: Don't look at just the costs that are there, also look at the enormous advantages that this city and all of northern Germany will gain from this project."

The Elbphilharmonie aims to become Hamburg's newest visual and cultural icon, with 2,150 seats, a glass body and state-of-the-art acoustics. Apart from housing a resident philharmonic orchestra, the hall is also to be used for pop concerts.

But many Hamburgers have grown weary of the construction delays and rising costs - most recently reaching 500 million euros ($615 million). Taxpayers are footing 323 million euros of the bill, more than quadruple the originally-anticipated 77-million euro share.

The project's completion has also been pushed back from fall 2009 to - assuming there are no more delays - fall 2013. 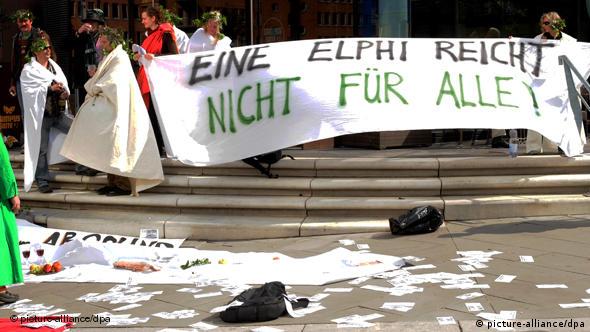 The problems with the building have earned the project many critics, some of whom picketed the topping-out ceremony dressed in togas in a tongue-in-cheek celebration of "Roman profligacy."

Indeed, many critics see the concert hall as only a decadent monument to the city's upper class.

"It's not right that 500 million euros are spent here when other projects are forced to save," said Christine Ebeling of the neighborhood group Gaengeviertel Initiative. 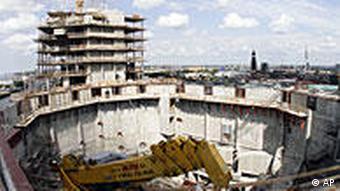 At opposite ends of the debate over who is to blame for the cost overruns and delays are the construction firm Hochtief and Swiss star architects Pierre de Meuron and Jacques Herzog.

Hochtief claims the architects have too often submitted their detailed plans late, while de Meuron and Herzog blame Hochtief for defects and deficiencies in the construction process.

The City of Hamburg has become moderator in the debate, and recently commissioned a parliamentary investigation into the causes for the explosive costs and ever-lengthening deadline.

Project manager Heribert Leutner, who describes his roll as "moderator, mediator, scapegoat," says he is optimistic about the project's completion.

When that may happen - and at what ultimate cost - may still be in question, but he says the project's ultimate completion and the many benefits it will bring to the city of Hamburg, are not at all in doubt.

If it had been clear from the beginning just how expensive Hamburg's Elbphilharmonic concert hall would become, no one would have agreed to build it. The project is turning into an embarrassment to the city. (12.04.2010)

Hamburg to Get New Music Temple

The port city of Hamburg will boast an imposing new landmark in future: a swanky glass and steel philharmonic concert hall perched above an old cocoa storehouse on the banks of the Elbe river. (27.10.2005)

Hamburg is a city of contrasts

There's the harbor and the famous red-light Reeperbahn district on one side and the waterfront villas of the rich on the other: Hamburg is full of contrasts and that's what makes it so popular with tourists. (23.03.2010)