The celebrities, athletes and politicians gathered in Hamburg on Monday greeted the announcement that they would be Germany's candidate city for 2024 with a loud cheer. Now, they admit, it's time to get to work. 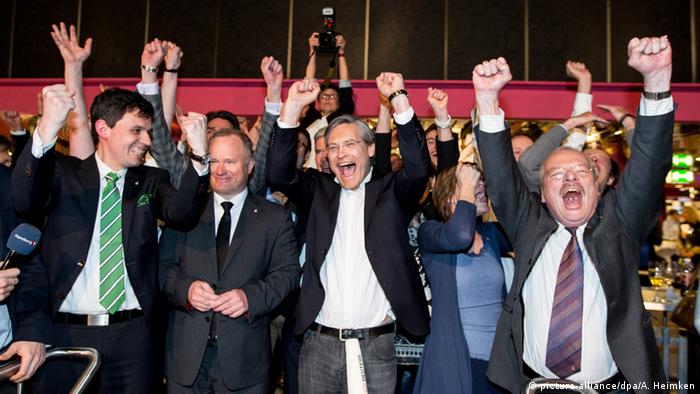 The small pins on everyone's jackets give a clue to what everything is about, on this cool Hamburg night at the city's stylish Skylight Cafe. The city's 2024 Olympic emblem - part red flame, part blue wave - is also visible everywhere. Everyone here tonight wants Hamburg to get the 2024 Olympics and Paralympics to come to their city.

Over the last few months, the city's politicians, business leaders, artists and athletes have been trying to beef up support for the Olympic games. But, on this evening, their fate is being decided 500 kilometers south, in Frankfurt. The board of the German Olympic Sports Confederation (the DOSB) is announcing whether Hamburg or Berlin will be Germany's candidate city for the 2024 Olympics.

On the screens in the Skylight Cafe, Hamburg's Olympic advertizing campaign is on loop - complete with images of the February night that 25,000 Hamburg residents lined the city's Alster lake to show their Olympic support. It seems like all of Hamburg's TV channels and newspapers are here tonight: camera lights shine, reporters ask questions and photographers click their way from group to group. 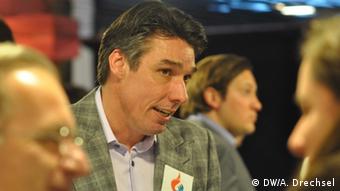 Michael Stich in conversation: the biggest names in Hamburg sport were on hand on Monday night

Rumor does the rounds

About an hour before the official announcement, a rumor does the rounds amongst the guests. Hamburg has got the nod, leaks a German regional broadcaster. But the Hamburg citizens, always wary of getting too excited about anything, don't let themselves get carried away. "Don't count your chickens," is the sentence you hear from everyone. They'll start cheering later they say when - or if - the DOSB board decides in their favor.

But at 11 minutes past 7 p.m. no-one can hold themselves back any longer. "Our recommendation is Hamburg," says the DOSB president Alfons Hörmann, at the press conference in Frankfurt. In the Skylight Cafe everyone bursts into celebration in response: there is clapping, handshakes, clinking champagne glasses and happy faces everywhere.

"We didn't just manage to compete with Berlin, we actually managed to win the recommendation," says Hamburg's sports minister Michael Neumann proudly, just minutes after the announcement. The idea of a compact Olympic games, in the middle of the city, convinced not only the people of Hamburg but also the DOSB, he says. 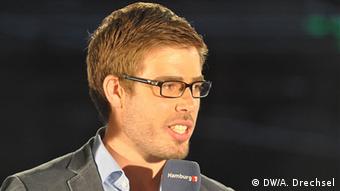 Never too old: Eric Johannesen says he would be tempted to come out of retirement for a chance for gold in Hamburg

The former German tennis player Michael Stich, also in attendance, is excited about the Olympics coming to Hamburg: "I think that Germans are open, friendly people and we can prove that, during the Olympics." Stich, who won a tennis gold medal for Germany at the 1992 Olympics says Hamburg has what it takes to host. Should it be awarded the games, the event should be "for all athletes and all people" he says.

Rower Eric Johannesen, a 2012 Olympic gold medalist, says if the games were to come to Hamburg he would even consider coming out of retirement. The rower will be 36 years old in 2024, but the temptation would be huge to get involved again if he could race in Hamburg.

"I would have to look at it. It would depend on my work situation, whether I would get back into the sport again," he says.

But, for the moment nothing is confirmed. Hamburg has to convince the world that they want the Olympics and Paralympics badly enough, and the city will have to engage in plenty of lobbying. Hamburg's Sports Minister Michael Neumann is well aware of the work that is ahead.

"It's a great honor, but it's also a great responsibility to represent Germany. We haven't crossed the finish line. We have only just started this marathon."

Opinion: Why Germany should back Hamburg

Germany's Olympic Sports Confederation (DOSB) wants Hamburg to be Germany's Olympic city in 2024. DW sports editor Stefan Nestler thinks it is a good idea and hopes Germans will get behind it. (16.03.2015)

Germany's Olympic Sports Confederation is recommending Hamburg as the country's sole representative for the 2024 Olympic bidding process. With the decision, the German capital Berlin misses out as a possible candidate. (16.03.2015)