Saudi newspapers have reported that pilgrims joining this year's Hajj will have to wear an electronic safety bracelet. Last year, more than 2,000 people died in a stampede during the religious festival. 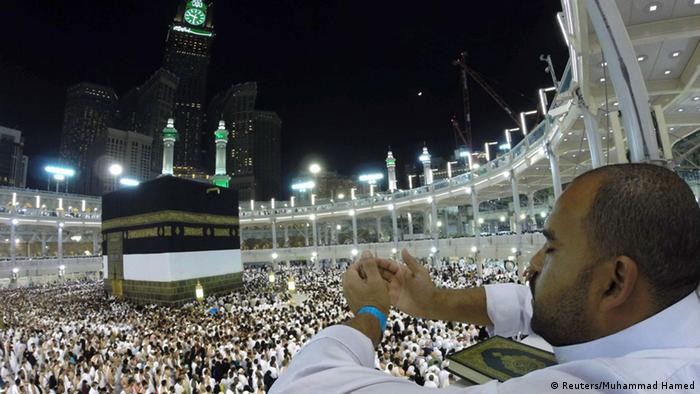 Water-resistant and connected to GPS, the devices will also instruct worshippers on timings of prayers and provide access to a multi-lingual help desk to guide especially non-Arabic speaking pilgrims around the various rituals of the annual Islamic event in Mecca.

The new plans are part of a major safety drive following the deadliest disaster in a generation during last year's Hajj pilgrimage.

Saudi authorities say that the death toll from the Hajj stampede has risen to 717. Iran has blamed Saudi Arabia for a lack of safety measures during a ritual involving Muslim pilgrims pelting stones at a symbolic devil. (24.09.2015)

The Hajj stampede could have been avoided by reducing the number of pilgrims to Mecca. But for the Saudis, the Hajj is a business opportunity and more important than the safety of pilgrims, writes DW's Shamil Shams. (25.09.2015)

The international community has demanded better management of hajj crowds, a day after over 700 pilgrims were killed in a stampede in Mecca. Saudi authorities blamed unruly pilgrims for the confusion. (25.09.2015)

Panic in Mecca: A pilgrim speaks out

Hundreds of people were killed in a stampede just outside Mecca during the Hajj, the annual Muslim pilgrimage. Osama bin Javaid is a Pakistani pilgrim in Mecca. He spoke to DW about his impression of the situation. (24.09.2015)

As many as 2,070 people died in a crush when thousands of pilgrims converged on a walkway intersection near the Muslim holy city of Mecca last September. The number of bodies repatriated to foreign countries did not correlate with the Saudi official figures, which totaled 700.

The tragedy happened as pilgrims made their way in searing temperatures to the Jamarat, the place where they ritually stone the devil in the city of Mina in western Saudi Arabia.

The new security measures also include nearly a thousand new surveillance cameras, which were installed last month at Islam's holiest site, the Grand Mosque in Mecca.

More than 2 million Muslims make the annual pilgrimage to Mecca despite a worsening security situation for several years that has seen deadly stampedes, fires and riots.

Despite the launch of an interior ministry investigation into last year's tragedy, there has been no word on its findings. Saudi officials faced international condemnation over a lack of emergency preparedness.

The tragedy led to a war of words between Saudi Arabia and Iran after 464 Iranians died in the crush.