Gunmen have stormed a military base in southern Thailand, according to an army spokesman. The assault, which is the most deadly in some eight years of violence, has left at least 16 militants dead. 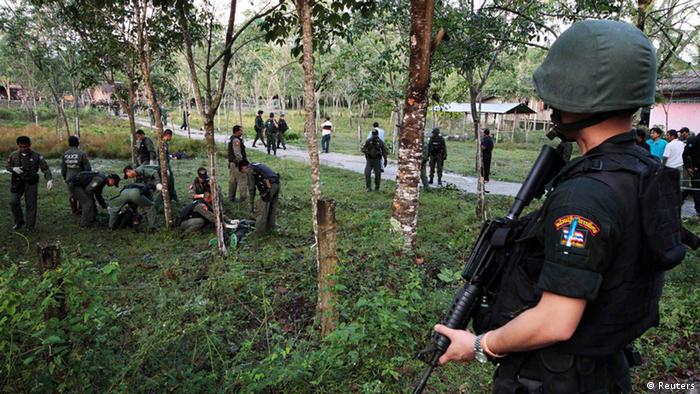 The gun battle between soldiers and at least 60 insurgents happened Wednesday in the province of Narathiwat on the Malaysian border.

"Sixteen militants were confirmed dead after the attack," unit commander Captain Somkiat Pholprayoon told reporters, adding that a combined force of around 100 military and police officers is in "hot pursuit" of the militants who fled the base after the attack. The military said it suffered no casualties in the attack.

"We learned of the attack in advance from defected militants," Colonel Pramote Promin, southern army spokesman, told Thai television. "We were able to secure the camp. All of our forces are safe."

The violence is the latest in a series of attacks in Thailand's three majority-Muslim southernmost provinces. The most recent attack Wednesday was the deadliest since security forces stormed the Krue Se mosque in Southern Thailand in 2004, killing 32 Muslims.

Insurgents have been fighting for greater autonomy in the region from Buddhist-dominated Thailand since 2004, with shootings and bombings occurring on a near daily basis, though attacks on military bases are relatively rare.

Violence in the restive south is usually aimed at Buddhists and Muslims associated with the Thai government, such as police, soldiers, state officials and teachers. More than 5,500 people have been killed thus far in the conflict.

The unrest highlights difficulty Thailand has had keeping its insurgency from developing into a more serious conflict. Five soldiers were killed by suspected insurgents on Sunday after a spate of attacks on civilians.

The provinces of Pattani, Yala and Narathiwat were once part of an independent Malay Muslim sultanate until being annexed by Thailand in 1909. Muslims in the south have long complained of discrimination by the central government in the capital, Bangkok.

Thai monarchy a hindrance to democracy?

The recent jailing of a reporter in Thailand has once again illustrated that the country's monarchy is not only restricting press freedom and democracy, but actively endangering it. (28.01.2013)