Guilty pleasure: Chocolate with a side of remorse | Environment | All topics from climate change to conservation | DW | 13.04.2017

Guilty pleasure: Chocolate with a side of remorse

During the Easter season people around the world will celebrate by consuming millions of chocolate bunnies and eggs. But where does all this chocolate come from? Hint: It's not really the Easter Bunny. 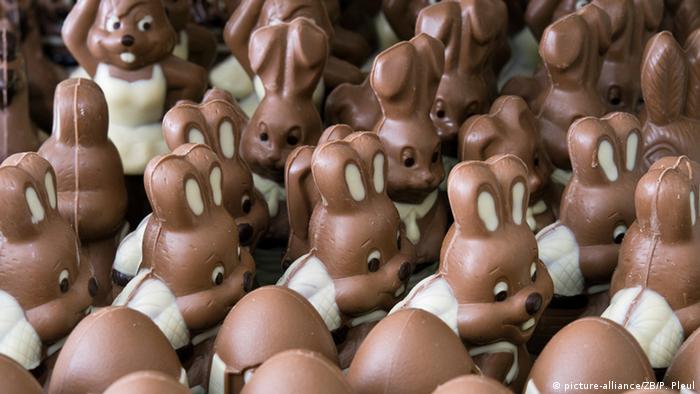 The world's sweet tooth keeps getting sweeter. Though demand for chocolate in emerging countries is not growing as analysts had hoped, the rest of the world cannot get enough of the stuff. Alone in 2016 Germany produced an estimated 200 million chocolate Easter bunnies. But for the chocolate it's a long journey that often starts in western African.

The cacao tree is a small evergreen plant originally from the tropical regions of South and Central America where it has been cultivated for thousands of years. Starting in the 17th century, European adventures transplanted the trees to the West Indies, Africa, the Philippines and beyond. 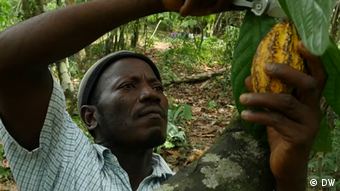 The cacao tree's seeds - the cocoa beans - are harvested from large pods which grow throughout the trees. When ripe each pod is packed with 30-50 individual beans. The beans are separated, fermented and dried - a very labor-intensive process. Then they usually go on a long global processing trip and end up as cocoa powder, cocoa butter, drinks or chocolate.

Unlike many other crops, cocoa beans can be harvested almost year-round in numerous countries. Today, Ivory Coast and Ghana are the world's biggest producers. However, since turning cocoa into actual chocolate is such a drawn out procedure, local farmers usually only see a tiny fraction of the money consumers spend on chocolate bunnies.

In nature cacao trees grow within rainforests. Traditional farmers still plant and harvest under the shade of taller trees. But as demand for cocoa and other commodity crops grow things are changing.

Increasingly family-owned farms have started to plant their trees in direct sunlight. In the past this was not such a problem because their small-scale cultivation didn't have a big overall ecological impact. But the steady increase in demand for cocoa has not let up and this small-scale encroachment has added up to big losses of virgin forest area.

Trees in direct sunlight may yield more beans in the short run, but this method has huge ramifications for the region. These trees attract more pests which must be fought using pesticides. The trees are also more susceptible to diseases. In the end they produce fewer beans. 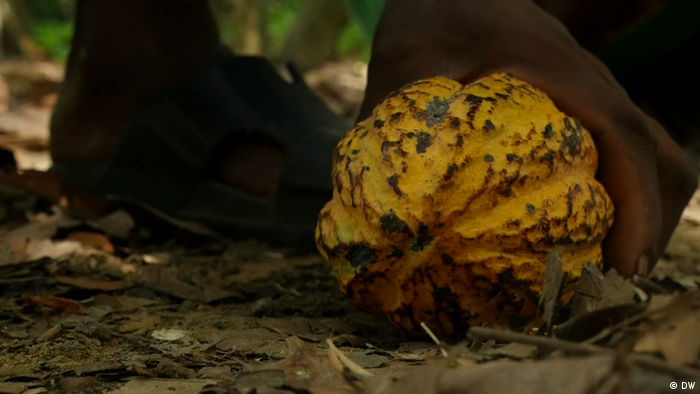 Seed pod from a cacao tree

Additionally, big multinationals are taking over ever more of the production. They run large industrial plantations with little respect for the local environment. It is estimated that four million hectares (15,440 square miles) of African forestland is lost each year - though not all of this can be linked to farming alone.

Clearing forestland to make room for new sun-drenched trees has many consequences beyond just deforestation. The lack of shade can cause the ground to dry out. A decrease in biodiversity, soil erosion and the destruction of wildlife habitat are just some of the other effects.

Can one person make a difference?

Most experts think that local cacao farmers should return to traditional shade farming and work more closely together in cooperatives. Working together will give them more clout with buyers to negotiate higher prices. Shade farming will give them the opportunity to grow additional crops below and above their cacao trees - like peppers, mangoes and coconuts. 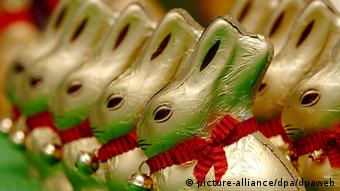 In the end though, the real money is in chocolate and not cocoa. And no matter how the cocoa is farmed, Africa has so far not been able to turn it into chocolate on a large scale. Big European and American manufacturers are the ones who are making a fortune. They are also the ones who can make a difference in deforestation by demanding sustainable forms of land management.

Last month some of the world's largest chocolate makers agreed to do just that. In a special agreement they promised to help roll back deforestation in the global cocoa supply chain. Their first target is Ivory Coast and Ghana, which together account for around 60 percent of total world production.

We can never really be sure where our food comes from or how it was produced unless we grow or make it ourselves. But taking time to read labels and shopping locally are steps in the right direction. What we buy has knock-on effects beyond our wildest dreams in the smallest corners of the globe. Before you grab that chocolate egg or Easter Bunny think about the long arduous journey the chocolate has made.

Cacao as a conservation tool