Jürgen Katt exports disused garbage trucks from Germany to Guatemala to help clean up the country's highly polluted Lake Atitlán and treat waste. He talked to Global Ideas about the challenges the project faces. 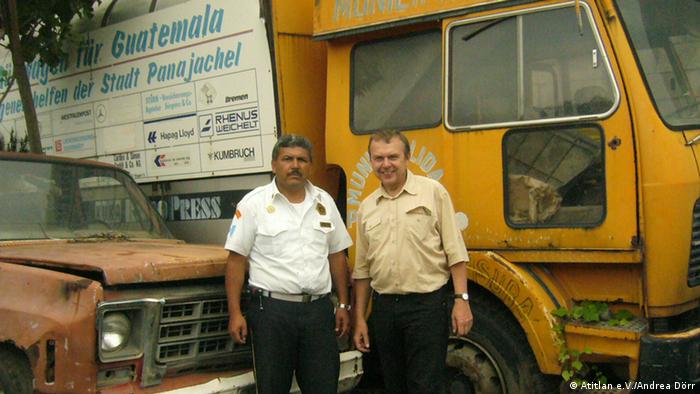 Like many countries in the developing world, Guatemala has a real garbage problem. For decades, trash has been simply dumped in several places in the ground and untreated sewage has been diverted into neighboring waterways. Over time, the pollution has taken a heavy toll on the fragile ecosystem in many parts of the country, especially Lake Atitlán in the south. Since October 2009, the lake has been blanketed with a carpet of toxic cyanobacteria, putting the brakes on fishing and scaring away tourists.

German-born Jürgen Katt has lived in Guatemala since 1986. Following the Chernobyl nuclear disaster, he moved to the region of Panajachel from Berlin with his wife and two children. The place lies on the shores of Lake Atitlan. Katt had visited the area as a tourist four years earlier and immediately fell in love with it.

To protect his adopted homeland from pollution and environmental degradation, Katt set up the Atitlán e.V organization in 1991. Katt, 64, and his team raise money to promote several projects which include setting up eco-friendly wastewater treatment plants in the region. Today, Jürgen Katt is Germany’s Honorary Consul to Guatemala.

DW:Around 20 years ago you exported the first German garbage truck to Guatemala. Why? It’s not a typical souvenir!

Jürgen Katt: Since the 1980s, tourism has exploded in Guatemala. And with the tourists came trash. But there is no functioning infrastructure, no designated dump trucks that can transport rubbish to secure landfills. It’s just dumped into the river bed, and it ends up polluting Lake Atitlán and the drinking water. When I moved to the lake back then, I saw how people were destroying their livelihoods. I didn’t want to see that happen. I had fallen in love with the country and saw it as my responsibility to do something. With the help of an old friend from school, I bought a suitable vehicle, spruced it up and transported it across the Atlantic, and by 1989 the garbage truck was finally up and running.

Katt: It was a refurbished Mercedes garbage truck, but even good quality vehicles can’t last forever. The truck was on the road everyday until it gave out in 1997. But it served as an organ donor for the next generation of trucks. 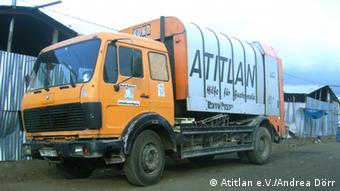 For the last 20 years, disused German dumptrucks have found a new life in Guatemala as they help to clean up pollution

DW: One dump truck for an entire region seems to be too little. Did it still help improve the waste disposal situation?

Katt: Now we have more trucks on the road. But the problem keeps getting worse each year. The number of people living around the lake has tripled in the last 20 years, and at the same time the amount of waste has increased tenfold. Most of the landfills are no longer right next to the lake, but trash is burned there – every day! And most of the region’s drinking water sources are right next to the trash heaps.

DW: Why hasn’t anything been done?

Katt: The insight and know-how and financial resources are all lacking. If no long-term solution is reached soon, it will be an ugly wakeup call. The crux of the matter is that people’s attitude towards trash has to change. They have to develop environmental awareness.

DW: So you mean outside forces must find a way to actively include the local population instead of dictating from abroad?

Katt: Absolutely, that is essential. As guests in this country, we can’t tell the native population what they should and should not do. With very few exceptions, we always offer our help without any conditions. 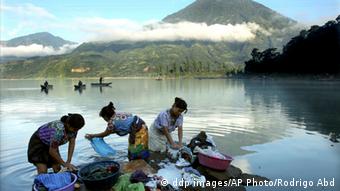 DW: How do you get residents to get involved?

Katt: We help them learn how to help themselves. We mainly work with kids in schools. They have a good grasp of the concept because they subconsciously realize that this is about their own futures. We actually have recently seen kids admonishing their parents when they thoughtlessly throw trash on the streets.

DW: The NGO Long Way Home has found an innovative way to reuse trash near Comalapa: they’re using it to build homes and schools. Is that a real solution or just pure activism?

Katt: We have to welcome any kind of recycling. Over the years, there have been several attempts at Lake Atitlán too. Plastic bottles are filled with trash and sealed airtight, and then used to pull and plaster the walls of a house. Hiding rubbish like that is better than tossing it in the lake where it contaminates drinking water or burning it in open nature where it pollutes the air and land. It’s not just a general solution.

DW: It seems like it’s exclusively private associations that have joined the fight against pollution and that provide financial resources. Do you want the government to play more of a role?

Katt: I have been hoping for that since the end of the 1990s. The wife of the last president Alvaro Colom did a lot for the environment. She said that the lake lacked oxygen and installed devices that floated on the water to help refortify the supply. Unfortunately that project failed miserably because wind and waves disrupted the devices and they sank. Right now, there are a few government organizations that are trying to help. There are also some international private foundations that, like us, are trying to help save Lake Atitlán.

DW: What has been your biggest success to date?

Katt: Any mayor who wanted to have access to one of our garbage trucks had to promise to create a designated landfill far away from the lake. In five separate places around the lake, all community and illegal landfills near the shores have disappeared. We have also suffered setbacks, though. 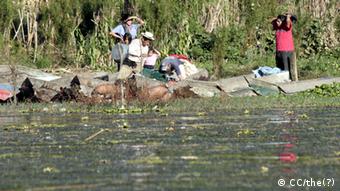 Illegal trash disposal and contaminated sewage are choking the lake

Katt: When Hurricane Stan blasted through Guatemala in 2005, it destroyed the water treatment plant and sewage flowed into the lake for years. With donations and help from the local population, we were able to build an eco-friendly wastewater treatment plant that at least absorbed about 60 percent of the pollutants. But then there was another shock. We could only stand by helplessly and watch as another natural disaster destroyed our facility. We hurried to build a replacement, but that one was destroyed just a few months later because of heavy rainfall. That was by far the toughest experience for me as project head at the Atitlán Foundation since 1991.

DW: Will Guatemala have a regulated waste and sewage disposal system in the near future?

Katt: The government can’t singlehandedly conquer the mountains of trash in the next two decades. An immediate solution will only be possible if you transfer the responsibility to a foreign private specialized company. Naturally, I think of a German recycling company because they already have the necessary experience and know-how for waste collection and disposal, and they can put the right technology into place. Right now, I think a German solution to garbage disposal would be the best way to restore Lake Atitlán and bring it back to life.