Voting has ended in Lithuania, where President Dalia Grybauskaite is seeking a second term. Although she is favored to win, an apparent failure to achieve an overall majority means a run-off vote looks likely. 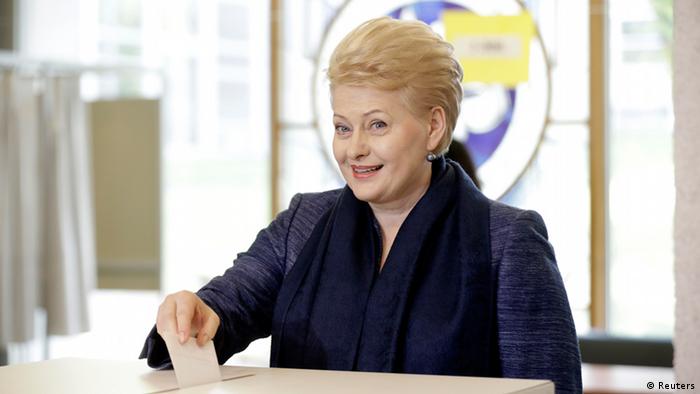 Incumbent President Dalia Grybauskaite emerged as the candidate with the largest share of the vote in Lithuania's presidential elections on Sunday.

However, it appeared unlikely she would win an overall majority, having garnered about 45 percent of votes.

Results with 97.7 percent of votes counted on Monday showed Grybauskaite scored 45.8 percent, while her nearest rival, Social Democrat MEP Zigmantas Balcytis, took 13.7 percent. Should the figures stand, the two would face each other in a runoff poll to be held on May 25.

In order to secure victory in the first round of voting, Grybauskaite or one of her rivals would have to win at least 50 percent of the votes - but this would also require an overall turnout of 50 percent. Voter turnout of less than half would therefore prompt the run-off election, coinciding with European Parliament polls.

The turnout threshold appeared to have been met, with election commission chief Zenonas Vaigauskas saying after polling stations closed that it stood at 53 percent of the country's 2.5 million registered voters.

Ahead of the vote, opinion polls had showed 47 percent of voters favored Grybauskaite, contrasting sharply with the 10 percent of her closest rivals, Labor candidate Arturas Paulauskas and Social Democrat Zigmantas Balcytis.

In 2009, Grybauskaite, formerly the EU budget commissioner, won with 69.04 percent against six other candidates in a poll that drew in 51.67 percent of the Baltic country's registered voters.

'Down to the will of the people'

While casting a ballot on Sunday, the incumbent told reporters that the outcome of the presidential election rested solely with Lithuanians.

"The Lithuania of tomorrow depends on the decision every Lithuanian citizen makes today," Grybauskaite said in the Lithuanian capital Vilnius. "It is down to the will of the people."

Lithuania's elections coincided with controversial votes in two parts of eastern Ukraine on Sunday, where pro-Russian separatists were seeking autonomy for the Donetsk and Luhansk regions. The political unrest in Ukraine has raised fears among former Soviet satellites - including Lithuania - that Moscow will use its military might to reassert control over former territories.

The stalwart leader, nicknamed the "Iron Lady" for her Thatcheresque resolve, has maintained a hard line against Moscow amid rising tensions, vowing in no uncertain terms to defend the country. Moreover, she has supported energy and financial policies that can buffer Vilnius against Moscow, including backing its first liquefied natural gas terminal and its plans to adopt the euro in 2015.