A major exhibition on one of the most symbolic battles in history opens in northern Germany. German Chancellor Angela Merkel visited the exhibit in Detmold on Friday. 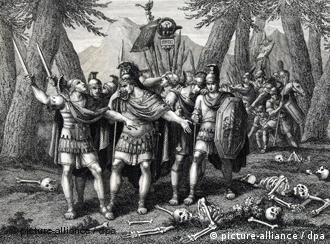 The exhibition is spread over three sites in Detmold, Kalkriese and Haltern and organizers are expecting more than half a million visitors by fall.

The joint project is called "Imperium Conflict Myth" and the exhibits will take visitors back 2000 years, to when an alliance of Germanic tribes annihilated three elite Roman Legions in the famous so-called Battle of Teutoburg, or Varus Battle.

This may seem too long ago to be of any significance today, but some historians say the defeat in 9 AD prevented a full romanization of Germany and arguably altered the course of Roman, German and European history.

As a result of the Roman defeat, Germany was never incorporated into the Empire, which had repercussions on language culture and the development of future statehood. Prior to the battle, the Roman Emperor Augustus Caesar was intent on military expansion across the Rhine River and into central and northern Europe.

The battle induced Rome to withdraw back to the Rhine, which became the new frontier between the "civilized" and the "barbaric" world. In later centuries, Germany became a base for barbarian incursions which ultimately brought down the empire.

The leader of the Germanic tribal forces was a chieftain from the Cheruski tribe named Arminius or Hermann, whom some consider Germany's first national hero and a symbol of liberty. 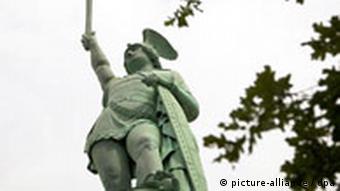 Germany was neither an entity nor did the tribal people regard themselves as Germans in those days. In fact, the various Germanic tribes were often at war with each other, and this renders Arminius' feat of piecing together a tribal coalition against Rome all the more remarkable.

Arminius was educated in Rome and initially served as a soldier for the Roman Empire. However, Roman expansion, taxation and jurisdiction were not well received among the Germanic tribes. As a result, while still serving under the ex-Consul Publius Quinctilius Varus, Arminius began plotting to unite a number of Germanic tribes to take up the fight with Rome.

Skilled in Roman military tactics, he reportedly chose a suitable spot for an ambush in which three entire Roman legions led by Varus were wiped out.

The loss of 20,000 seasoned soldiers at the hands of "mere Barbarians" tarnished Rome's image of invincibility. Varus committed suicide by falling on his sword, and a traumatized Emperor Augustus in Rome is credited with moaning repeatedly "Quinctilius Varus, give me back my Legions!" ("Quintilie Vare, legiones redde!").

Archaeologists say the exact location of the battle was near the modern village of Engter north of the city of Osnabrueck. Bones, weapons and armour of the Rome's XVII, XVIII and XIX Legions were discovered along a narrow 17-km-long stretch of marshy woodlands.

A third-century battlefield unearthed in northern Germany seems to point to Roman legions fighting in the region far longer than most historians have ever thought. (16.12.2008)

A new museum is set to open at the site of Roman baths at Xanten near the German-Dutch border. The museum aims to help visitors immerse themselves in the architecture, sounds and smells of the Roman settlement. (31.07.2008)