Initial results from parliamentary elections in Bremen have returned the governing coalition of Social Democrats and Greens to power, while pushing conservatives into third place. 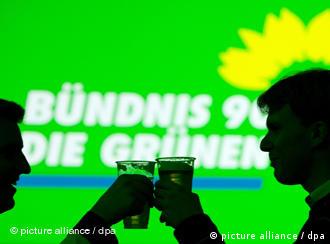 The Greens are making gains across Germany

Exit polls in the city-state of Bremen indicate that the incumbent coalition of Social Democrats and Greens can continue governing but have propelled Chancellor Angela Merkel's conservative Christian Democrats (CDU) into third place.

"For the first time in the history of the German Federal Republic, we are ahead of the CDU in a regional election," said one of the Green's federal leaders, Claudia Roth.

The Social Democrats (SPD), who have governed Bremen for 66 years, took 38 percent of the vote, while their Green allies won 23 percent. Support for Merkel's CDU fell four percentage points from the last poll in 2007 to 21.5 percent; the party's worst result in Bremen in 52 years.

Hermann Gröhe, general-secretary of the CDU, called the voters' verdict "a painful setback."

The outcome is a further drubbing for Merkel after four other regional elections this year saw her conservatives lose voter sympathy.

"The result is a difficult one for us," said the CDU's parliamentary group leader, Peter Altmaier. "Unfortunately, it reflects what opinion polls have said for weeks," he added.

Merkel's federal coalition partners, the Free Democrats (FDP) captured a meager three percent, down from 5.4 percent four years ago and less than the minimum five percent needed to send representatives to the local assembly. The Left Party took 5.5 percent.

The election also marked the first time that 16 and 17-year-olds were allowed to vote in a legislative election.