Renate Kuenast, one of the Green Party's top candidates for the 2009 elections, angered the German auto industry Thursday when comments she made were interpreted as a call for Germans to buy Japanese cars. 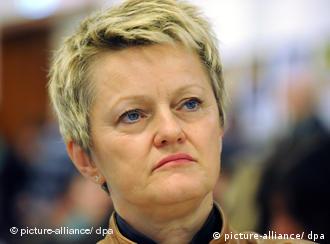 Kuenast is no stranger to car industry controversy

In the interview with the Hamburger Abendblatt newspaper, Kuenast said that people should look to the German Motor Club's (VCD) list of the most environmentally-friendly cars when choosing their next vehicle.

"As a member of the Green Party I want people to buy modern cars with the lowest CO2 emissions," she said, suggesting that the VCD list was a good reference point for these cars. She expressed regret that the highest-placed German car came in at number seven – the two-seater Smart car – and added that German manufacturers "should act as quickly as possible to provide different cars and to secure jobs."

Kuenast found herself in similar trouble two years ago when she called on people to buy the Toyota Prius hybrid car for its low environmental impact in comparison to other cars. Her statement was seen as a vote of no-confidence in the German car industry.

She also said that she was annoyed with the executive committees at German auto manufacturers which continued to fight at a European level to keep CO2 emissions for cars at the highest level possible.

"If the Germans are too stupid to build modern cars, then one must recommend that people should buy a Toyota Prius," she said.

Germany’s famous autobahns could be swarming with nippy electric cars by the year 2020 if Chancellor Angela Merkel's cabinet gets its way. (19.08.2009)

Report: carmakers a long way off from EU emissions goals

BMW made the most progress of any large carmaker in cutting CO2 emissions, according to a new report, but experts warn that all manufacturers are far from meeting the EU's 2012 goal. (26.08.2008)

Germans encouraged to give up their gas guzzlers

Chancellor Angela Merkel encouraged Germans to buy more fuel-efficient cars as a way to save energy. Yet as gas prices continue to climb, opposition leaders said that's not enough. (28.04.2008)