Green good intentions cause chaos in two German towns | Germany| News and in-depth reporting from Berlin and beyond | DW | 12.07.2009

Residents near Dortmund were evacuated this week after the ground collapsed around a geothermal heat pump, while in another German town, almost 190 buildings have now been damaged by a geothermal project gone awry. 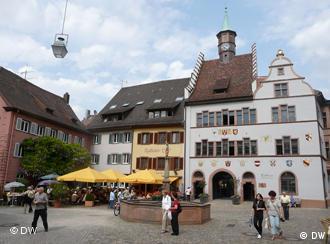 The geothermal drilling was in Staufen's historic town center

Residents of the small town of Kamen, near Dortmund, had a shock this week when ground around a construction site collapsed as a result of drilling for a geothermal heat pump. Many locals had to be evacuated amid fears that houses could collapse, and many nearby buildings now have long cracks in the walls.

For residents of the southern German village of Staufen, the news came as little surprise: their town began sinking - and then rising - as a result of geothermal drilling almost two years ago.

Until then, Staufen had just been a quaint day-trip destination, visited by German pensioners looking for a slice of Black Forest cake and history buffs drawn to the town's links to Johann Georg Faust, the legendary alchemist and magician, who - so the story goes - made a pact with the devil here. 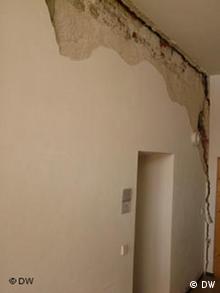 The inner walls of the new town hall are badly damaged

But in 2007, Staufen became known in Germany for another reason. The town council decided to do its bit for the environment and use geothermal power to heat the newly refurbished historic and new town halls. In September that year, the council hired a company to drill deep into the earth's surface to harness the geothermal power there.

A few weeks later, fine cracks began appearing in the walls and floors of the town halls and surrounding buildings, including the historic guest house where Faust is believed to have stayed. At least 187 buildings now have cracks, some up to 15 centimeters wide.

"We'll have to use hiking boots"

Initially, parts of the town began sinking, but now the earth is rising. During the digging, water came into contact with anhydrite: a mineral, which – when exposed to water – expands and turns into gypsum. That has been causing the earth to swell, pushing the buildings up with it, and causing the cracks. Authorities are now drilling to find out if the swelling process can be stopped.

Staufen Mayor Michael Benitz told Deutsche Welle that there are thousands of similar drilling projects in the state of Baden-Wuerttemberg alone, and he cannot understand why Staufen has had such problems.

"These drillings were all over the place and this swelling phenomenon didn't appear anywhere else," he said. 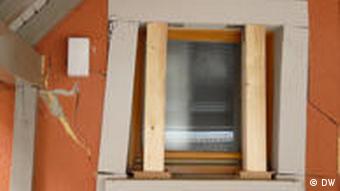 Staufen authorities say the ground under the city has been rising by up to one centimeter a month - a very significant amount in geological terms - and while they say that no buildings are in danger of collapsing, they have had to use wooden beams to reinforce windows in the new town hall.

Marianne Pfadt, a local tour guide, says the damage runs right through the center of Staufen.

"If this continues, we'll have to use hiking boots to get into town," she said, laughing.

No one to blame

Pfadt may be able to joke about the situation in her home of 20 years, but in truth, she and other locals are angry.

One resident watching helplessly is Claudia Woelfle, manager of a café which backs onto the drilling site. The facade of her business along with the stone floor inside are covered with cracks. 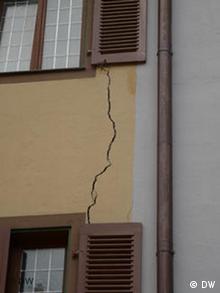 Cracks can be seen throughout town

"You can see that they are getting bigger and bigger," Woelfle said. "And more and more are appearing, too."

Even though the cracks appeared shortly after the geothermal project began, there is still no hard evidence to prove that drilling is behind the problem. Regular tectonic activity underneath the city could also be responsible - but that is unlikely.

However, the lack of proof means that legally, locals have no one to blame and no one to foot the bill, which is expected to run into the millions. Pfadt says locals do not how they are going to pay for the damage.

"They're desperate," Pfadt says. "(These houses are) their old age pension," she says. "Everybody plans, 'oh, in old age, I'll sell the house and move', but you can't sell these houses." 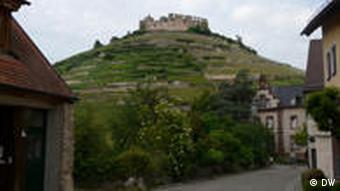 Pfadt says locals have been sending angry letters to local newspapers, and some have threatened to go to court to get repair bills paid. In the meantime, the town council has set up a fund for donations to help pay for the damage, and local businesses may even get a slight boost from day-trippers who are curious about Staufen's cracking problem.

A new influx of tourists would be at least a bit of welcome news for Staufen's residents, since authorities have been unable to say when, or if, the swelling - and cracking - will stop.

While alternative energy campaigners are pleased with a new law making solar panels compulsory for buildings in Marburg, Germany, some residents are talking about "environmental dictatorship". (25.06.2008)

Using the earth's natural heat as an energy resource is a fine idea. But not necessarily for those who live near drilling sites, as people along the border between Germany, Switzerland and France are finding out. (17.01.2007)