The area around Manolada is often linked to the abuse of migrant workers toiling in its strawberry fields. Now it has become the site of the unlikeliest refugee camp in the country, as Pavlos Zafiropoulos reports. 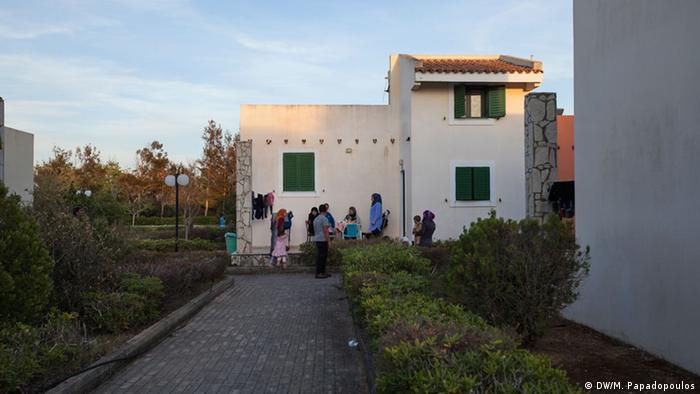 As the setting sun cast golden hues over the LM tourist village on the western coast of the Peloponnese, children chased each other over the grass and ate strawberries, the sounds of their laughter filling the air. A short distance away, families sat on the beach looking out over the Ionian Sea as frogs hidden in nearby reeds began their evening chorus of amorous chirps.

On the surface, the scene was little short of idyllic, making it easy to forget that the complex's residents are all refugees from Syria. Only weeks ago many were in mortal danger, facing the threats posed by Bashar al-Assad's bombs or "Islamic State's" (IS) murderous legions. Each has a hair-raising story to tell, of the lives they have left behind, the loved ones they have lost and the dangers and difficulties of their escape.

"Do you know Daesh (Arabic name for IS - the ed.)? We were in Daesh-controlled territory for two months," Tarek Alfelou told DW, sitting on the veranda of the small bungalow that he and his wife and two children aged 7 and 11 share with another family they met in Turkey. Alfelou once ran a printing office in Damascus and has the demeanor of a soft-spoken academic. He lost two nephews to the war. "I had to grow my beard, my wife must dress in all black," he says of their time in IS-held territory. Later he recounts how the four of them scrabbled up a muddy ravine under the cover of night to cross the border into Turkey "like commandos." Weren't his children terrified? "No! I told them it was like an adventure, like Robinson Crusoe." After five years of growing up in war, he says, it is the children who are stronger than the parents.

Located on the northwestern coast of the Peloponnese near the village of Myrsini, the LM Village refugee camp is perhaps one of the unlikeliest in the country. It is the only camp in the entire Peloponnese, and almost as far as one can get in mainland Greece from the beaches of Lesbos or the northern border crossing with Macedonia. 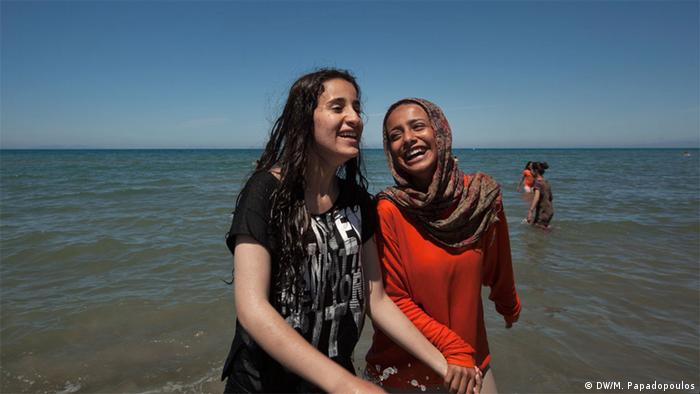 But what really sets this camp apart is that, unlike many of the camps that have been created at the behest of the central government on disused military bases and other sites, the LM Village belongs to the local municipality which stepped forward and offered it voluntarily for the housing of refugees. More surprising still is that this is taking place in a region of the country that is more often associated with far-right sentiment and xenophobia.

Strawberries are one of the area's chief crops with the bulk of the produce exported to markets in Europe, Russia and the Middle East, but their cultivation has a dark side. Many of the strawberry farmers rely on undocumented migrants to pick their crops and there have long been reports of these workers facing gross exploitation verging on slavery, being regularly denied their meager wages and forced to live in subhuman conditions with no recourse to justice.

In April 2013 the region of Manolada made international headlines after 35 Bangladeshis were injured when two foremen of the farm that they had been working at opened fire on them. The migrants had reportedly sought payment after having worked for months without pay, only to be met with bullets and shotgun shells. The incident led to a campaign for a boycott of Manolada's 'blood strawberries.'

The outrage was only heightened when all of the accused in the case including the owner of the farm in question, Nikos Vangelatos, were either acquitted or escaped prison sentences.

Yet for residents of the municipality of Andravida (which includes both the areas of Manolada and Myrsini where the LM Village is located) the fact that the Manolada attack has turned the region into a poster-child for Golden Dawn-like xenophobia and racist violence is downright unfair.

"It makes me angry. I don't accept someone calling Nea Manolada racist without knowing the true story," Alexis*, 33, told DW. Alexis is a strawberry grower himself. He also relies on migrant laborers but denies any exploitation, arguing that the undocumented migrants get paid the same amount a Greek working legally would. He says he is forced to rely on this pool of labour as few Greeks are willing to work in the strawberry fields. 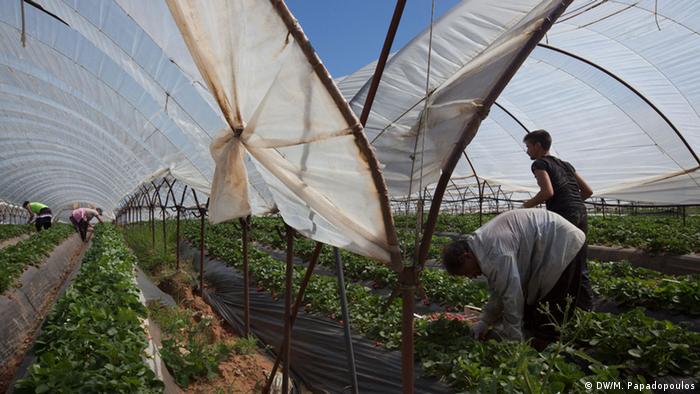 Strawberry growers have come under fire for exploiting migrant workers

While he condemns the violence and concedes that there are bad apples among the farm owners, he argues that the Manolada attack was reported on in a way that unfairly tarnished an entire industry. He notes that he and other growers have long demanded the state issue the migrant workers with at least temporary work permits so that they may work legally. That would protect them from future exploitation and the farmers from prosecution.

From Syria with love

"After the incident in Manolada it appeared that this is a xenophobic area, but that is not true," agrees Nabil-Iosif Morant. A doctor from Syria, Morant has lived and worked in the area for 25 years ever since he moved here to be with his wife. He says he was a 'migrant for love' and that from early on he felt at home with the region and its people, many of whom he has treated over the years. It appears that the feeling is mutual. In the last local elections Morant was elected mayor of the municipality and its population of 22,000. He says he was the first non-ethnically Greek mayor to ever be elected in the country.

Morant was the driving force behind the idea to offer the tourist bungalows of LM Village to Syrian refugees trapped in the country. Yet he also took pains to ensure that he had broad local support. He made the offer of use of the complex (which is owned by the municipality but has sat disused due to a legal dispute) by the Ministry of Migration conditional on the fact that it would be only used to house vulnerable families. He also pledged that the number of residents would be strictly limited and if and when they were relocated they would not be replaced with newcomers.

As a result the LM Village now houses about 340 people. After some initial wariness on both sides, Syrian families now shop in the nearby village of Myrsini giving a boost to the local shops while some locals have also befriended the refugees and visit them regularly.

Meanwhile teams of local volunteers headed by the local branch of the Red Cross have taken on the day-to-day running of the camp, while deliveries of donations from the surrounding area and beyond arrive almost daily - including recently, crates of strawberries.

"We did this to help the refugees. But we also showed that the Manolada incident was unfortunate and does not reflect the area or its citizens," Morant told DW.

And while the conditions may be better than what is on offer in most camps in Greece, none of the refugees relish the prospect of a long wait before they can be relocated to other EU countries, put their children in schools and start new lives with dignity and work.

For his part Tarek Alfelou says he will be patient, because there is little else he can do. He may even use his time to write. "I've wanted to write a novel for 20 years, and now I have a big story," he says. But, he adds, "I am still waiting for the ending."

*Alexis's name has been changed at his request.