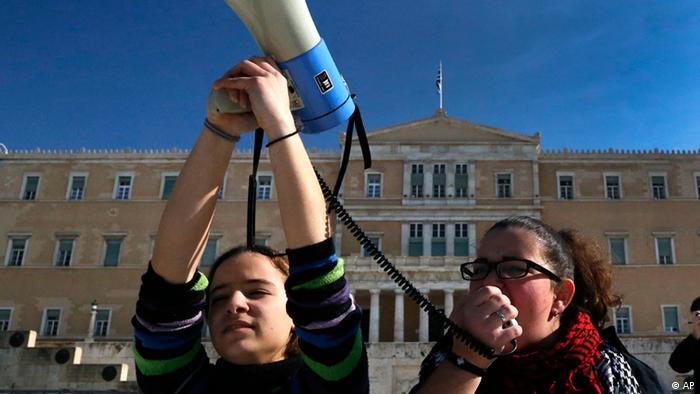 Athens was without buses, suburban rail and electric-powered "Trolley" buses on Thursday as public transport workers walked off the job for a day-long strike against austerity measures. Hospital doctors also went on strike to protest against ongoing health sector spending cuts.

Shops in Greece are folding by the day. Many Greeks are unemployed, while others work for half the pay and those who can, leave the country. The economic crisis is draining its middle class financially. (23.01.2013)

The union representing workers at the Public Power Corporation called for a day long strike in solidarity, while other municipal employees will stage a four-hour walkout.

Austerity measures that took effect this year include a 25-percent cut to the incomes of most public servants, which have sparked public outrage and regular strikes. Greece, which has an unemployment rate of more than 26 percent, must make the cuts in order to appease international creditors who have helped keep the country solvent.

Last week, about 300 police stormed a subway train depot to disperse striking staff. About 90 had been staging an overnight sit-in after the government invoked emergency law ordering protestors to return to work.

On Wednesday, around 30 Communist unionists were arrested after attempting to occupy the office of Labour Minister Yiannis Vroutsis who had previously announced a new pension reform. Protests ensued on Thursday outside an Athens court demanding the release of those arrested.

On Thursday, the head of the country's central bank told Germany's Süddeutsche Zeitung that Greece will pay back the billions of euros in loans it has received to fight its debt crisis.

"I understand the concern of European taxpayers," Governor of the Bank of Greece George Provopoulos, said in Thursday's edition of the daily newspaper. "But I can tell you one thing: this time, the government will get results. The country is transforming itself. The Europeans will get their money back. The Greeks, including the politicians, have understood one thing: this time around it's the last chance for Greece."

Provopoulos also said he agreed that the previous structural reforms demanded by the country's international creditors did not go far enough.