Greek police say they have arrested several people in connection with a foiled terrorist attack in Belgium this week. Brussels has meanwhile deployed hundreds of troops to help maintain security. 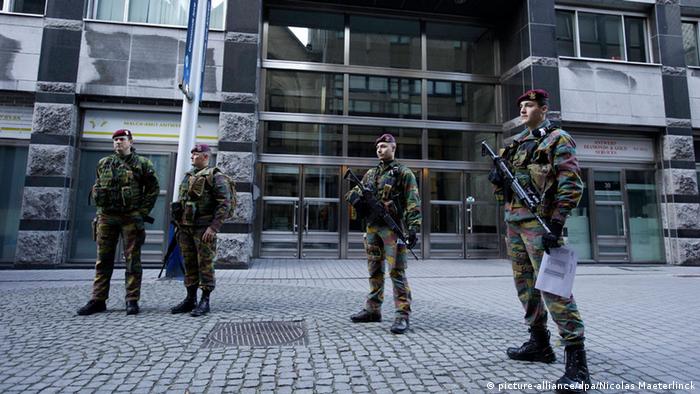 Greek police on Saturday arrested at least four people in the capital, Athens, as part of an investigation into a terrorist plot foiled in Belgium this week, a police source and media say.

It is still unknown whether those arrested include Abdelhamid Abaaoud, a 27-year-old man of Moroccan origin who Belgian authorities reportedly believe may be the mastermind of the terrorist cell behind the foiled plot.

The arrests come in the wake of Belgian police raids on an alleged jihadist cell in the eastern city of Verviers on Thursday night during which two suspected Islamist gunmen were killed and a third wounded.

Thirteen suspects were subsequently arrested across the country, and two more held in France at Belgium's request.

Belgian authorities say the terrorist cell was planning to kill Belgian police on the streets and in police stations across the country. Several of those arrested had returned from fighting in Syria with jihadist militants.

In the aftermath of the raids, Belgium has raised its national alert level to the second highest ranking, and has deployed hundreds of soldiers across the country to reinforce police as they seek to protect embassies, EU institutions and Jewish sites.

This comes just a week after terror attacks over three days in Paris that left 17 dead.

Belgian police said there appeared to be no direct link between the plot in Belgium and the Paris shootings, but the incident has caused many European nations to be on increased alert for Islamist terrorist attacks - particularly in view of the threat posed by young Europeans returning home after fighting alongside extremist groups in the Middle East.

German police have also arrested two people in the captial, Berlin, after raids on Friday on numerous properties linked to radical Islamic Salafists.