The Greek parliament has lifted the immunity of several legislators from the far-right Golden Dawn party. The vote comes as part of a major probe into the murder of an anti-fascist musician last month. 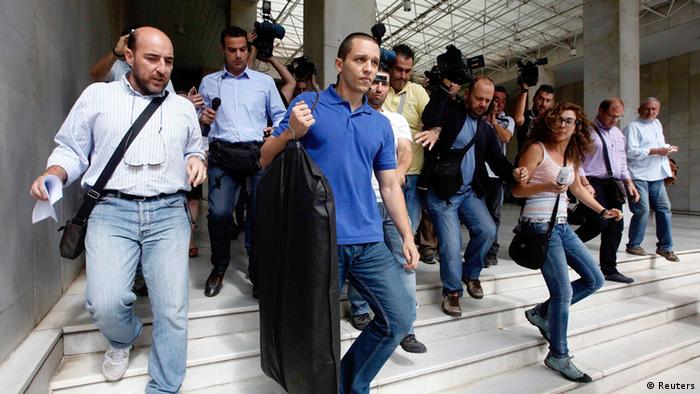 On Wednesday, the Greek parliament voted to lift the immunity of the Golden Dawn lawmakers George Germenis, Efstathios Boukouras and Panagiotis Iliopoulos so that they can face criminal charges. The parliament also voted on whether to call Golden Dawn spokesman Ilias Kassidiaris (pictured), Ilias Panagiotaros and Chrysovalantis Alexopoulos to answer to lesser charges, a process also requiring legislative approval.

Before the vote, lawmakers from the neo-Nazi-linked party walked out of parliament after dismissing the investigation into Golden Dawn's activities as a "conspiracy".

Despite being held in pre-trial custody, a parliamentarian and member of Greece's far-right Golden Dawn party wants to take part in official debates and votes. Most Greeks call the party a criminal organization. (04.10.2013)

A court had already indicted Kassidiaris and Panagiotaros earlier this month on the charge of belonging to a criminal organization and then conditionally freed them. Golden Dawn leader Nikos Michaloliakos, his deputy Christos Pappas and lawmaker Yiannis Lagos remain in the high-security Korydallos prison in Athens.

Golden Dawn has 18 lawmakers overall in the 300-seat chamber. Authorities began the probe into Golden Dawn after the murder of hip hop artist Pavlos Fyssas by a self-confessed neo-Nazi supporter last month. Witnesses have since testified implicated senior party members in the beating of migrants, extortion and possible arms smuggling.

On Thursday, authorities plan to vote on cutting the party's access to state funding.