Greek neo-Nazi and MEP extradited to Athens to serve prison sentence | Europe| News and current affairs from around the continent | DW | 15.05.2021

Ioannis Lagos, a founding member of the Greek neo-Nazi party Golden Dawn, is due to serve a 13-year jail sentence. As a member of the EU Parliament, he had enjoyed immunity until late April. 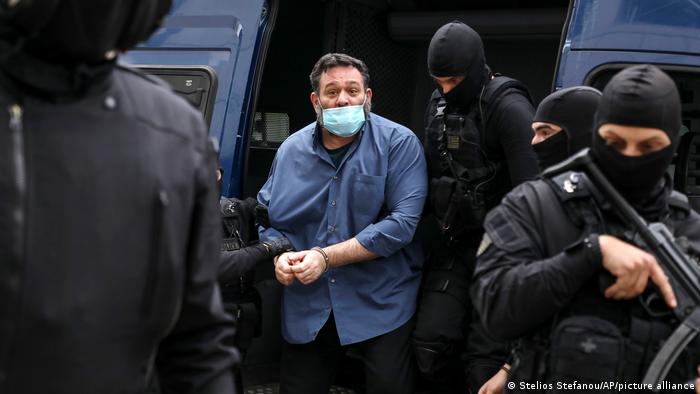 Ioannis Lagos, a Greek member of the European Parliament, arrived at Athens International Airport on Saturday afternoon handcuffed and accompanied by five Greek police officers. The 48-year-old will now serve a prison sentence of 13 years and 8 months, for crimes stemming from his days as a leading member of the far-right Golden Dawn political party.

The convicted politician shouted, "For Orthodoxy and Greece, every sacrifice is worth it," as he was led before prosecutors. Despite prior pleas by his lawyers that he be jailed near Athens in order to carry out his duties as an MEP, prosecutors ordered him taken immediately to Domokos Prison in central Greece.

"Greek democracy fought and eliminated the poison of the Golden Dawn party. The rule of law stood firm against criminals," Greek government spokesperson Aristotelia Peloni said regarding the extradition.

The politician's conviction stemmed from the largest trial against fascists in Europe since the Nuremberg trials that followed World War II. In it, a total of 68 individuals, including Lagos and leading members of the party, were convicted and given harsh sentences for crimes ranging from operating a criminal organization to arms possession, assault and murder.

Lagos flouted the law as a member of European Parliament

Lagos, who was elected to the European Parliament in 2019 as a member of Golden Dawn but relabeled himself an independent, fled Greece on the day of his conviction and enjoyed diplomatic immunity in Brussels until it was finally lifted on April 27 of this year — at which point he was immediately arrested by Belgian authorities on a European arrest warrant over fears that he may once again flee.

Though he had initially resisted extradition and suggested he had been offered political asylum outside Greece, Lagos ultimately agreed to return.

The rise and fall of Golden Dawn

Founded in 1985 and registered as a political party in 1993, Golden Dawn was an unabashedly neo-fascist outfit that sought to re-establish a right-wing military dictatorship in Greece. It pushed its staunchly anti-immigrant message throughout Greece's years-long debt crisis and tapped into growing popular anger.

In 2012, the party won 18 seats in Greek parliamentary elections on an anti-austerity and anti-immigrant platform that capitalized on frustration over the economy and unemployment. It remained a powerful political force in the Greek Parliament for years, ultimately becoming the body's third-largest party after 2015 national elections.

Its popular appeal, however, began to fade among all but its most hardcore supporters as news of its criminal activities became more widely known. It failed to win any seats in the 2019 parliamentary elections.

The murder that brought down Golden Dawn

Not only had Lagos been a founding member of Golden Dawn, he also sat on the group's central committee. As such, he held control over working-class districts in Athens where Golden Dawn members regularly assaulted immigrants, communists, trade unionists and anyone else they viewed as enemies.

One such enemy was Pavlos Fyssas, an anti-fascist rapper who was stabbed to death in September 2013. Fyssas was killed by a Golden Dawn member in one of the districts that Lagos controlled. Phone conversations from the night of the murder suggested that Golden Dawn leadership had given the order to carry out the crime.

By the time the trial — which had begun on April 20, 2015 — ended on October 7, 2020, Lagos and six other Golden Dawn leaders, including founder and longterm leader Nikos Michaloliakos, were found guilty of having run a criminal organization operating under the guise of a political party.

All but two of the party's leaders were jailed immediately. Deputy leader Christos Pappas, however, escaped police custody and is rumored to have fled to the Balkans, and Ioannis Lagos had fled to Brussels beyond the reach of Greek authorities.

The fact that he had not only avoided arrest but enjoyed his freedom — and still continues to draw his MEP salary — had been a source of embarrassment and outrage in both Athens and Brussels. Pappas is still at large.