Greek gold mine controversy: Investment in the future, or environmental disaster? | Europe | News and current affairs from around the continent | DW | 19.09.2017

Greek gold mine controversy: Investment in the future, or environmental disaster?

Opinions have long been divided over a gold mine in Greece. For years, advocates have talked about jobs and investments, while opponents worry about irreparable environmental damage. The government has said nothing. "Louder!" someone shouts as Christos Adamidis steps up to the microphone. "Only if you don't say again afterwards that I was yelling," he replies, and the crowd laughs. Yet no one is actually in a laughing mood.

Several hundred inhabitants of Ierissos, a small coastal village on the Chalkidiki peninsula in northern Greece, have gathered outside the cultural center and are listening to the speakers. This is the center of protest against the Canadian company Eldorado, which operates two gold mines in the region, near the neighboring village of Olympiada, and in Skouries.

Many people are wearing T-shirts with the logo S.O.S. Chalkidiki, a slogan that has m500 ade them famous throughout the country. Sometimes it all has the air of a family hiking expedition organized by a local anti-capitalist group. But the inhabitants of Ierissos have specific concerns: They're worried.

Read more: Can the EU save Poland's Bialowieza forest?

No media are here. No politicians have come, either.

"Before he was elected prime minister, Tsipras came to visit us and encouraged us to take to the streets," says the elderly man by my side. "Now no one comes any more, and we're treated like criminals."

He's not speaking metaphorically. The previous evening people had gathered at the cultural center to talk about the legal problems of some of the supporters. There was extensive discussion about DNA. 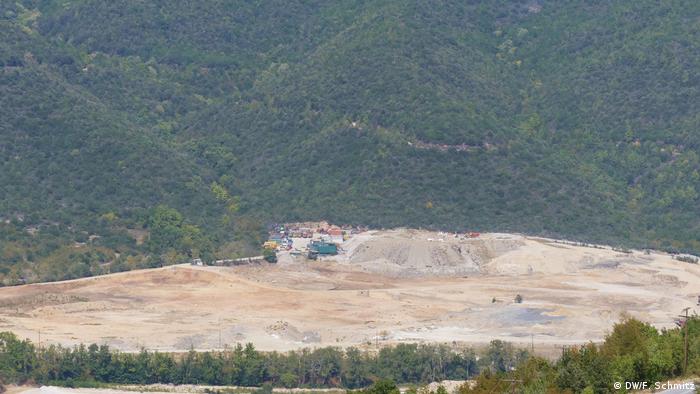 The background to this is an incident that took place in February 2013. A group of left-wing activists got as far as the entrance to the mine in Skouries, overpowered the security man and set fire to the guard house. A few days later the police carried out raids in numerous villages in the area, during which they collected DNA material: cigarette butts, water bottles, items of clothing.

"Almost 500 people faced investigation on the basis of these DNA samples, some of them are still facing trial. Yet DNA alone cannot actually be considered proof; at most it is only circumstantial evidence," explains the Thessaloniki lawyer Areti Skounaki.

The aim, she says, is to declare the protest movement a criminal organization, and that, in her eyes, has little to do with the rule of law.

Ever since, the people of Ierissos have felt abandoned. Yet their objections — to the plans made by a government heavily dependent on investment, and to the Canadian company — are certainly worthy of discussion.

A short time ago Eldorado threatened to pull out of Greece altogether if Athens refused permission for it to continue working in Skouries.

The focus of the conflict is a metal production technique known as "flash smelting." This enables pure gold to be obtained from the raw material produced — and Eldorado is contractually obliged to do this. The problem is that the raw material contains arsenic.

"Flash smelting is only suitable for raw material with a low arsenic content," explains the physicist Maria Kadoglou. "But in the case of the two mines in Skouries and Olympiada, the arsenic concentration is over 9 percent."

During the flash smelting process, according to a study commissioned by the Environment Ministry, arsenic dust is released into the air – as much as 20,000 tons a year. The maximum permitted level is 20 kilos. There are no technologies to purify the air, says Kadoglou.

But that isn't the only worry in Ierissos. The mine is situated directly on top of a seismic fault. Were there to be an earthquake, they fear that millions of tons of poisonous waste could be released into the environment. 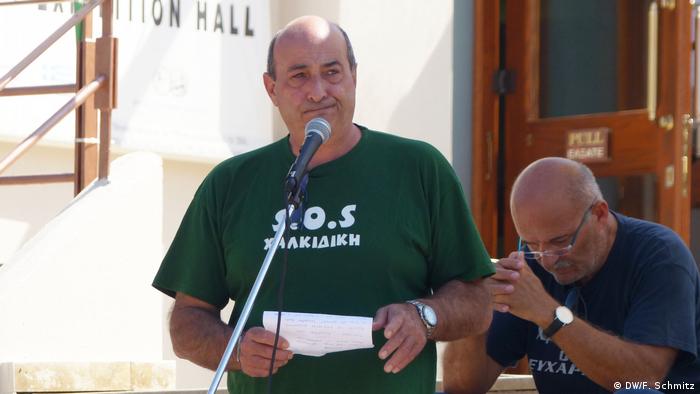 Last but not least is the question of drinking water.

"To operate a mine like this you need a dry environment. So the groundwater has to be lowered." Yet the mountain in question is the most important water source in otherwise arid Chalkidiki. And Greece's environment ministry is staying silent, says Kadoglou.

So there are three problems that opponents of the mine say Eldorado has so far not properly addressed: water, air and waste. The big counterargument from those in favor is: jobs.

"The people in the mountain villages have been working in the mines for generations. They don't think about what the consequences of the industrial use of the mines might be," complains Jotta Siosopoulou, one of the leading voices in the gold mine dispute. "In Ierissos we live almost exclusively from tourism. But who would still come to us then? How would we make our living?" 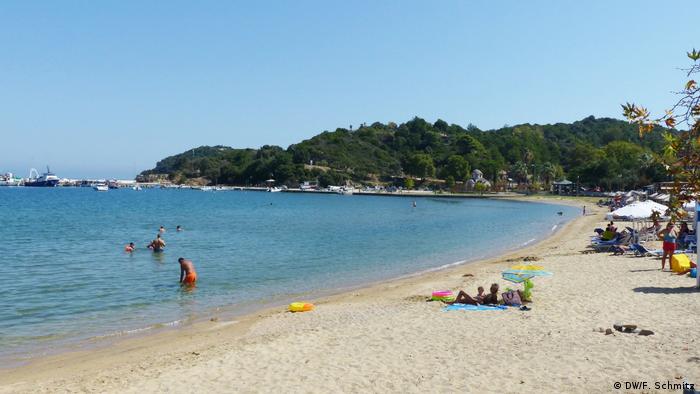 Tourism is a vital component of the economy in coastal towns like Chalkidiki. Locals worry that mining will damage the environment and, ultimately, their tourism business

The mountain village of Arnea is a bastion of advocates of the mine. Halfway there a road leads off to the right in the direction of Skouries, one of the two mines. Not a trace of the potholes that are usually a feature of Greek roads. Wide lanes and surfaced edges — ideal for big trucks. Reflectors fixed to the left and right, guaranteeing optimal vision on the carriageway, even at night. It all makes you feel as if you're driving along through a huge private estate.

The road ends before the well-fenced-off entrance to the mine. Immediately, a guard approaches. Photography is allowed, but we have to keep our distance. The situation at the biggest workplace in the region is tense.

"The mine is very important for our region," says a shopkeeper in Arnea. "Such an important investment is not something to be treated recklessly." Ierissos is considered a stronghold for opponents to the mines

Of course gold production could have a negative impact on tourism, he says; but the season is only three months long, whereas there is work in the mines all year round.

"A lot of people left when the economic crisis happened. Now they're coming back. The village squares are full in the evenings again," he says.

"I'm worried about the water, of course. But they've assured us there's no danger. The opponents down in Ierissos are exaggerating."

The "firm" – as they call Eldorado here – did make one mistake, though: "They didn't come to us right from the beginning to clarify unanswered questions."

And that still isn't really happening today. Approached by DW, Eldorado informed us: "The company seeks to use and implement best available technology at all of our global operations in order to minimize environmental impacts." 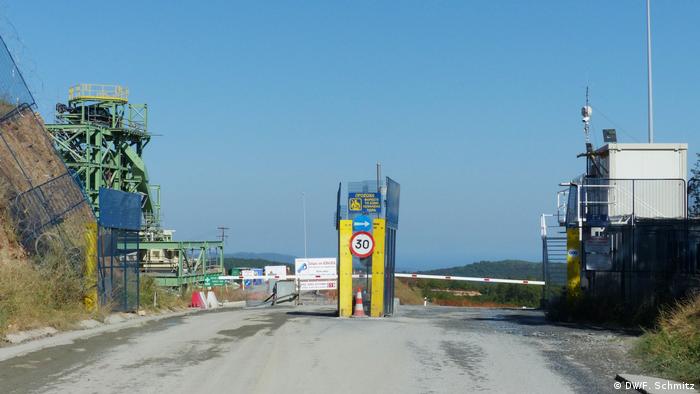 Following an altercation between protesters and a security man at the Skouries mine, police carried out raids and collected DNA material

The existing conflict with the Greek government calls this into question. One thing is certain: The Canadian company is benefiting from both the investment pressure that weighs so heavily on Athens, and from the weak job market in Greece.

Whether the billions the company is investing will ultimately be worth it for Greece as well can only be decided when the unanswered questions have been properly clarified. However, neither Eldorado nor Athens seem particularly interested in addressing this.

The Greek opposition and Athens' local mayors have accused the government of allowing an oil spill to spread unchecked. But the government says everything is under control and all will be "forgotten in a few days." (14.09.2017)

One of Greece's largest foreign investors, Eldorado Gold of Canada, has said it is going to scrap further investments at its mines in the country. It complained about government delays in issuing permits and licenses. (11.09.2017)

Greece could use Brexit to recover 'stolen' Parthenon art

In the early 1800s, a British ambassador took sculptures from the Parthenon back to England. Greece has demanded their return ever since. With Brexit, Greece might finally have the upper hand in the 200-year-old spat. (26.08.2017)

At least two people were killed when a 6.7 magnitude quake struck the Greek island of Kos and Turkey's Aegean coast, sending tourists out to the streets. USGS put the epicenter near the Turkish resort of Bodrum. (21.07.2017)

President Vladimir Putin is expected to officially announce the illegal annexation of the four Ukrainian regions in a ceremony on Friday, more than 7 months since the invasion was launched.