Protesting planned pension cuts, Greek farmers have blocked key roads and border crossings with their tractors for weeks. Now they're threatening to stage a blockade of the government district in downtown Athens. 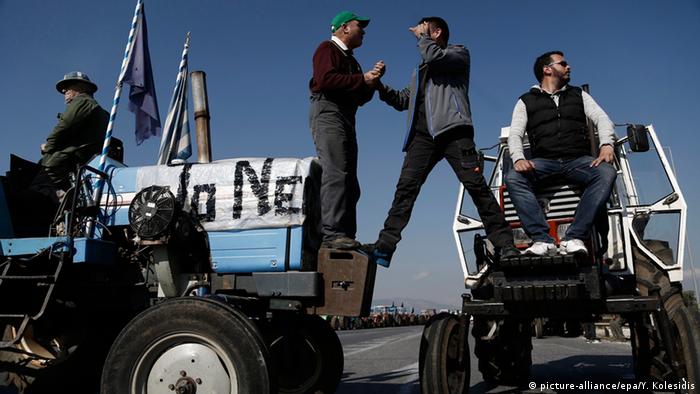 Traveling by road to Greece's Peloponnese peninsula can be trying these days.

Farmers have blocked the bridge on the Corinth canal with tractors for the past 18 days, forcing drivers to detour on rarely used country roads. Only ambulances and pregnant women are granted passage; trucks piled high with goods must turn back or take the rural route. On Tuesday, tractors also closed off the four-lane highway at Tempi Valley, near Thessaloniki, Greece's second-largest city.

The farmers plan to continue their protest until the government of Prime Minister Alexis Tsipras deals with their demands, which include canceling planned pension cuts, abolishing a new tax on wine and tsipouro brandy, and granting tax-free diesel for farmers - as well as a 12,000-euro ($13,400) tax exemption per year.

Roadblocks at various checkpoints along Greece's border with Bulgaria have made international headlines. Witnesses report that trucks were backed up for 25 kilometers (15 miles) on the Greek side on Friday. Bulgarian shipping companies reported losing millions of euros.

The economic analyst Panagiotis Bousbourellis said the main reason for the farmers' uprising lay less in lobbying and more in the devastating consequences of the upcoming pension cuts.

"In 2015, the farmers paid more than 400 million euros into the pension system - and from now on, they're expected to pay three times as much," Bousbourellis told DW. "That won't work, in particular because 600,000 people can't even pay their social security contributions anymore."

Ever since capital transactions controls were introduced in June, the number of insurance payments made on time dropped by a third, Bousbourellis said. At the same time, the government is determined to raise social security contributions as far as possible in order to avoid cutting pensions. "It's a plan that doesn't add up," he warned.

Undeterred, many farmers plan to continue their protest with a mass demonstration on Friday in downtown Athens. It remains to be seen whether they will actually ride their tractors all the way to parliament.

Government spokeswoman Gerovasili made it clear that tractors are not allowed in downtown Athens, adding that the police would react accordingly. Details of the operation aren't expected until the last minute: Greeks don't usually announce or apply for permission for public gatherings far in advance.

The farmers' associations aren't unanimously convinced of the wisdom of converging on the capital. The northern farmers would prefer to continue their roadblocks at border crossings and tollbooths over the weekend, but farmers from the south and west of the country have opted to move on Athens.

"I'm uneasy," the analyst Bousbourellis said. "I don't expect tractors to show up, but I'm worried about how the government and the police will react to an explosive protest."