The three Spanish firefighters and two Danish men have been acquitted on charges of attempting to illegally bring migrants to Greece. They had been involved in rescue missions for refugees and migrants in the Aegean Sea. 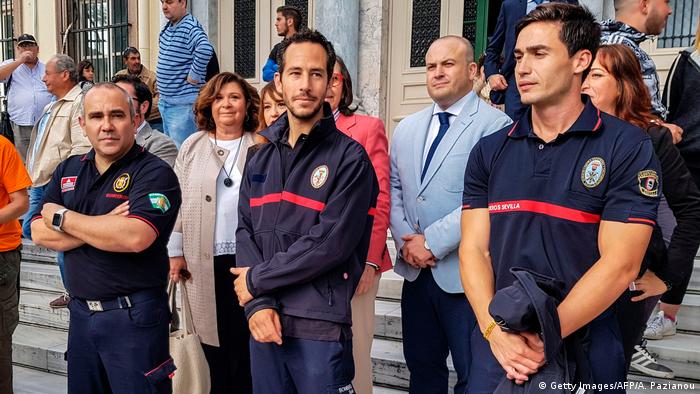 A Greek court on Monday cleared three Spanish firefighters and two Danish volunteers of trying to help illegal migrants enter the country though the island of Lesbos.

Jose Enrique Rodriguez, Manuel Blanco and Julio Latorre — fire fighters from the southern Spanish city of Seville — and Danish volunteers Mohammed Abbassi and Salam Aldeen were arrested on the Aegean Sea island in January 2016. According to Blanco, the Greek coastguard had arrested them in the middle of the night after they had returned from a rescue mission, which had been called off because the boat being sought could not be found.

In their trial, which was held in the Lesbos capital of Mytilene on Monday, two Greek coastguards testified that the defendants had not informed the authorities of their rescue mission and were not properly equipped for it.

A presiding judge dismissed the charges against the five men, who were facing up to 10 years in prison according to Amnesty International.

'Only helping to save lives'

Lesbos, a Greek island located 20 kilometers (12 miles) from mainland Turkey, has been at the heart of Europe's migration crisis. Thousands of refugees and migrants have traveled to the island on flimsy boats provided by smuggling rings. More than 1,000 people drowned making the attempt in 2015 and 2016.

The Spaniards were working as volunteers for Proem Aid and the Danes for Team Humanity when they were arrested. They were trying to help thousands of migrants who were risking their lives to reach Europe via Lesbos and other Aegean islands.

All five men had denied any wrongdoing in the trial. The defendants "were only helping to save lives," said a lawyer for the Spanish firefighters, Haris Petsikos.

They had support from international humanitarian groups during the trial. Many fishermen from Sykaminia, a small port in northern Lesbos and once a main landing sites for refugee boats, also showed up in support.

Rosa Aguilar, the interior and justice minister for the Andalusia region, where the firefighters are from, was also at the trial.

"They've been through a nightmare for the past two years," she said in a statement. "Now they can enjoy this moment with their families, who have suffered with them and they can continue being the people they are, people who show other[s] solidarity."