Hardly any other country can boast of such a high concentration of temples, sculptures, reliefs and archeological sites as Cambodia. 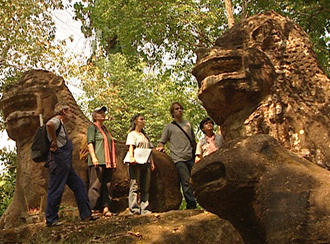 Animal Figures in the Kulen Mountains 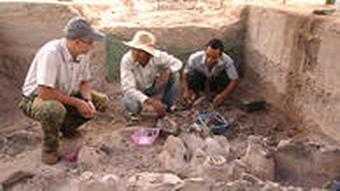 But many of these fascinating "objects of the world heritage" are in imminent danger from environmental factors or art and grave robbers. Archeologists and conservation experts are trying to save whatever they can, and not just at the world-famous temple complex of Angkor Wat, but also in remote, barely accessible cult sites, burial grounds or rock reliefs. 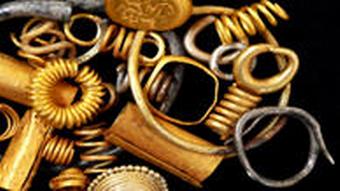 Dr. Andreas Reinecke is archeologist with the German Archaeological Institute in Bonn. When he first heard of the vast wealth of the grave finds - the abundance of gold objects and bronze drums - in Cambodia's southeast in 2007, he could hardly believe his ears. But his excitement was dampened by the likelihood that the news had come too late. In the village of Prohear, grave robbers had already discovered and almost completely looted one of the richest prehistoric burial grounds of southeastern Asia. Hundreds of gold and bronze objects had already vanished into the region's antiquities markets. 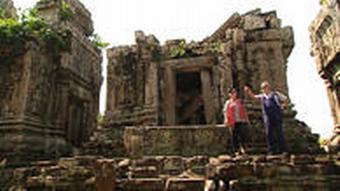 Hans and Esther Leisen in the Preah Khan Temple Complex

When Dr. Reinecke and his colleagues from the Memot Center Phnom Penh arrived in the spring of 2008 for "emergency digs", their worst fears appeared to have come true. They found little more than a ravaged moonscape of trenches and open graves. The robbers had even dug their tunnels under the heavily travelled village road. Feeling discouraged and hopeless, the archeologists set to work - and were rewarded far beyond their most optimistic expectations. Their discoveries included burial objects over 2000 years old. 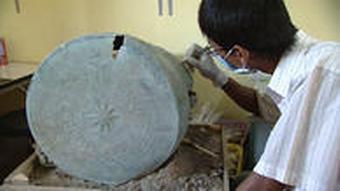 Another focus of German archeological fieldwork in Cambodia lies in the northwest. As part of the "German Apsara Conservation Projects" of the Cologne University of Applied Sciences, a German-Cambodia team under the direction of Prof. Hans Leisen is trying to preserve unique and hitherto virtually unknown cultural sites. The temple city of Preah Khan, for example, is one of the largest temple complexes of the Khmer culture. In spite of its near inaccessibility in the jungle, it has been largely devastated by looters and art robbers. The researchers are trying to crack the secrets of the approximately thousand-year-old temple city. When were the individual structures built? Where were the massive stone blocks taken from? And might the magnificent complex one day be restored?

A camera team accompanies Prof. Leisen's temple rescuers on their adventurous expeditions and observes Dr. Reinecke's gold diggers on one of their final "emergency digs" in Prohear.