If you want to know what the Olympics mean to an athlete, you need look no further than Frank Stäbler. The Greco-Roman wrestler had to overcome COVID-19 to make it to Tokyo ― but it all paid off in the end. Frank Stäbler wasn't sure what he felt stronger, the sheer joy at winning the bronze medal ― or the physical exhaustion from his tough battle against Georgia's Ramaz Zoidze. Stäbler staggered, struggling to stay on his feet. Then he raised his arms in the air in triumph.

This last match of his wrestling career was an epic battle that forced Stäbler to mobilize his very last reserves. But his irrepressible will prevailed: Stäbler finally checked off the last item on his sporting bucket list: Winning an Olympic medal. The 32-year-old earned the bronze medal in the 67-kilogram weight class of Greco-Roman wrestling, in which you may only grapple using your upper body.

Even without an Olympic medal, Stäbler had already established himself as a sporting hero in Germany, having already won three world championships and two European titles. The only thing missing from his trophy case had been an Olympic medal ― until Wednesday.

"I have focused my entire life on this," Stäbler had said before the Games in Tokyo, and he meant it in a literal sense.

Preparing to be at one's best for an Olympic Games is challenging enough for any athlete, but Stäbler found himself having to contend with an unusual problem: The weight class he had been expecting to compete in, up to 71 kilograms, was dropped. Still, Stäbler's desire to win an Olympic medal was so great that he wasn't about to let this stop him ― so he set out to shed enough kilos to allow him to compete in the 67-kilogram weight category.

Stäbler's usual weight is 75 kilograms (165 pounds), with only eight percent body fat. In the months leading up to the Olympics, he transformed his diet. Stäbler gave up sugar completely, eating only "dry food." Dates, hot spices, anything to bring the weight down. For months he kept to a strict diet while maintaining his training program ― a real, body-sapping feat of strength.

His body, battered by years of competition, didn't exactly make it any easier for him. Stäbler struggled with pain, the result of a serious shoulder injury, something that also gives him trouble during matches, particularly when battling his opponent on the mat.

As if he didn't have enough obstacles to overcome as he embarked upon what would be his last shot at an Olympic medal, Stäbler became infected with COVID-19 last autumn. Although he was almost symptom-free, the infection let to a 20-percent reduction in his physical capacity ― something that would be devastating for any competitive athlete. 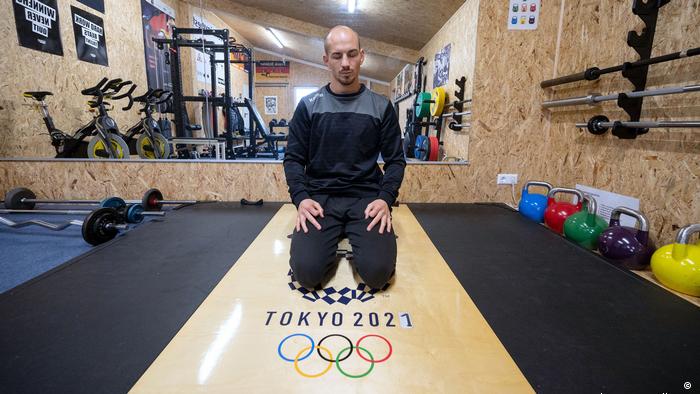 In an effort to compensate for this long-term COVID-19 effect, Stäbler enlisted the help of of his friend and breathing coach Yasin Seiwasser, whose intensive breathing exercises did the trick.

"I completely overcame the issue and put it behind me," Stäbler stressed.

The fact that Stäbler even attempted to overcome such hurdles to make it to Tokyo is a tribute to just how much the Olympics mean to elite-level athletes.

"I am the only wrestler in the world who has won the world championship in three different weight classes. In addition to that, I've also won two European championships," he said prior to the start of these Summer Games. But he also noted that the one thing that would make his successful career complete was missing.

He had come close to a medal at the two previous Olympics. In 2012 in London, Stäbler lost his bronze medal match against Manuchar Tskhadaia of Georgia and finished in fifth place. Hampered by a foot injury in Rio in 2016, Stäbler lost in both the quarterfinals and the repechage.

This time, though, Stäbler wasn't to be denied, mobilizing every ounce of energy he had left to win that elusive Olympic medal. Now he can retire from wrestling with the satisfaction of having fulfilled all his sporting goals.

Sydney McLaughlin broke her own world record on the way to 400-meter hurdles gold and an American 1-2. There was also a 1-2 for hosts Japan in a women's park skateboarding final dominated by teenagers.