GM and Bosch face lawsuit over diesel emissions cheating in US court | Business| Economy and finance news from a German perspective | DW | 26.05.2017

German auto supplier Bosch has been named in the lawsuit filed against GM in Detroit on claims its diesel pickup models used emissions-cheating devices. Bosch is "defending its interests." 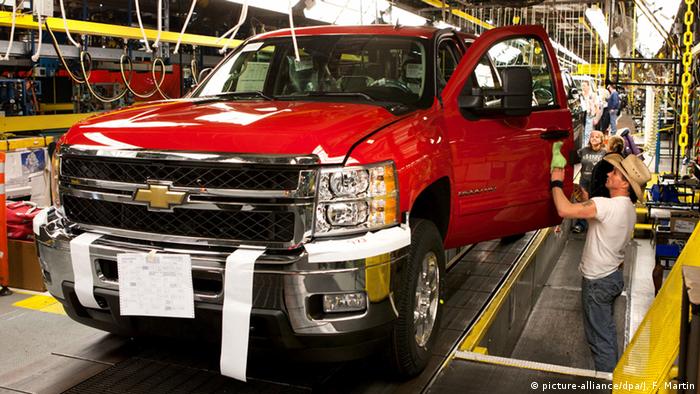 The lawsuit filed against GM in a Detroit federal court on Thursday claims that the car company's diesel pickup models used emissions-cheating devices similar to those in Volkswagen's (VW's) global Dieselgate scandal.

In court papers, Andrei Fenner of California, the owner of a 2011 GMC Sierra pickup, and Joshua Herman of Louisiana, who bought a diesel Chevrolet Silverado in 2016, said testing showed that GM was no different in hiding harmful nitrogen oxide emissions.

The two pickup models - of which GM has sold more than 700,000 units - "emit far more pollution on the road than in the emission certification testing environment," according to their complaint. The trucks allegedly employ "at least three different 'defeat devices' to turn down the emissions controls when the vehicle senses that it is not in the certification test cycle," it added.

GM vehemently denied the allegations, saying in a statement on its website that these claims were "baseless and we will vigorously defend ourselves," adding that both pickup models complied with all emissions regulations.

Auto industry on the hook

The lawsuit also accuses the German auto supplier Bosch of involvement in the alleged scheme. Bosch participated in the development of defeat devices for VW and agreed to compensate US consumers earlier this year.

Robert Bosch LLC, which made GM's electronic diesel controls. Bosch said it was cooperating with government investigations into emissions cases and "defending its interests" in lawsuits.

The allegations come in the same week that US authorities brought legal action against Fiat Chrysler, accusing the company of likewise configuring diesel-powered vehicles to deceive emissions tests.

Claimants in both cases are being represented by law firm Hagens Berman, which already pressed claims against VW. In Germany, premium carmaker Daimler has been targeted by prosecutors over suspicions of emissions cheating and in France, Renault and the PSA Group are being investigated.

So far, only VW has admitted any wrongdoing and agreed to pay compensation and penalties to the tune of about $15 billion (13.3 billion euros) in the US.