Officials on Greece's second-largest island have urged for more firefighting support as blazes prompt locals and tourists to flee. Meanwhile, fires in Siberia are threatening a nuclear research site. DW has the latest. 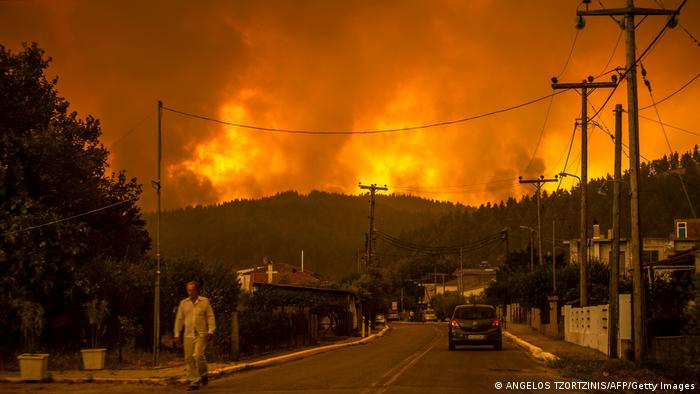 In Greece, fires that threatened the northern suburbs of Athens largely died down on Sunday — but the situation worsened on the island of Evia.

The fires ripped through Evia's dense forests, cutting off escape routes on land and prompting rescues via sea on Greece's second-largest island. Local officials have appealed for more firefighting assistance.

Air turbulence and surging wind from the fires on Evia are making it difficult for water-bombing planes and helicopters, said Civil Protection chief Nikos Hardalias.

Elsewhere in Greece, a firefighting plane crashed on the western island of Zakynthos during an emergency landing. The pilot made it out without serious injury, but the cause of the crash was not immediately known.

Over 570 firefighters are currently battling the blazes on Evia.

Greece's emergency crews have been bolstered by firefighters, equipment and aircraft from Romania, Ukraine, France, Switzerland, Spain and Egypt. Germany is also preparing to send over 200 firefighters.

The blazes, which began on Tuesday, were triggered by Greece's worst heat wave in more than three decades. At least two people have died.

Here's a look at the latest wildfire developments in other parts of the world.

In Turkey, at least six wildfires are still blazing out of control, according to official figures released on Sunday.

The fires are the worst the country has seen in more than a decade, with firefighting efforts entering their 12th consecutive day.

Firefighting efforts are currently focused on the western province of Mugla. Another fire in the province of Aydin that was believed to be under control reignited due to strong winds, reported broadcaster NTV.

At least eight people have died along with countless animals. An estimated 100,000 hectares (1,000 square kilometers; 386 square miles) have been destroyed so far. 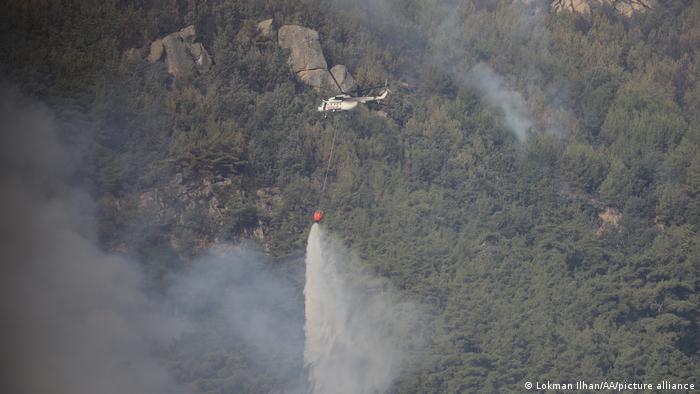 A helicopter dumps water on a forest fire in Aydin, Turkey

Spreading fires are now threatening a nuclear research site in the Russian city of Sarov, officials said on Sunday.

Officials raised the danger level to make it easier to deploy more firefighters to battle blazes.

The fire is only one of dozens burning in Russia at the moment. Nationwide, around 3.5 million hectares are burning, with over 155 active fires in Siberia alone.

Russian authorities evacuated two villages in Siberia on Sunday due to the threat posed by spreading fires.

Experts have said the blazes are the worst Russia has seen since official records were started. 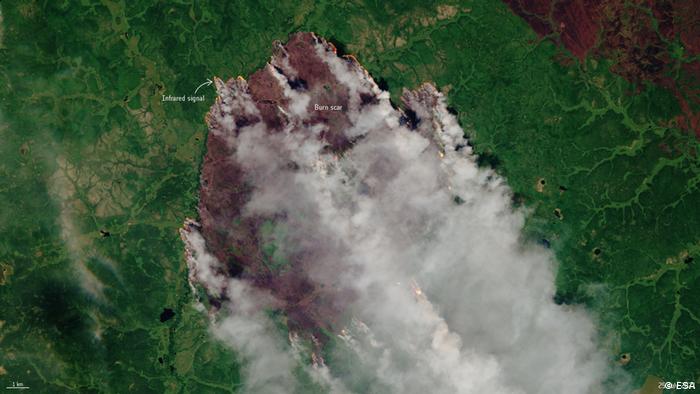 Over 155 active fires are currently burning in the vast Russian territory of Siberia, which has seen fires since July

Experts warned on Sunday that wildfires pose a grave danger to nature reserves and agriculture in southern Italy.

The region's fruit varieties like peaches, cherries and nectarines could drop by up to 50%, warned the Coldiretti agricultural association. Wheat yields could fall by 10%.

Sicily and Sardinia are currently struggling to contain wildfires, with officials warning that an impending heat wave this week could make things worse.

Temperatures are forecast to hit 45 degrees Celsius (113 degrees Fahrenheit) in the region on Tuesday and Wednesday, the civil protection agency warned.

On Italy's mainland, efforts are still ongoing to curb fires in the southern areas of Apulia and Calabria, while new blazes broke out in the province around Palermo.

The Dixie Fire, an enormous fire in northern California that starting burning on July 13, grew in size on Sunday. Despite tireless efforts to tamp down the blaze, it was only 21% contained as of Sunday, the CalFire website reported.

The Dixie Fire is now officially the second-worse to occur in the western US state, news agency AFP reported. Data shows that the fire covers an area larger than the city of Los Angeles and is roughly the size of the Hawaiian island of Maui.

Thousands of people have fled their homes, while the fire entirely destroyed the historic town of Greenville.