The decline of ancient Maya society has perplexed archaeologists for decades. A stalagmite containing the climate record of the past 2,000 years now points toward changing weather patterns as a culprit. 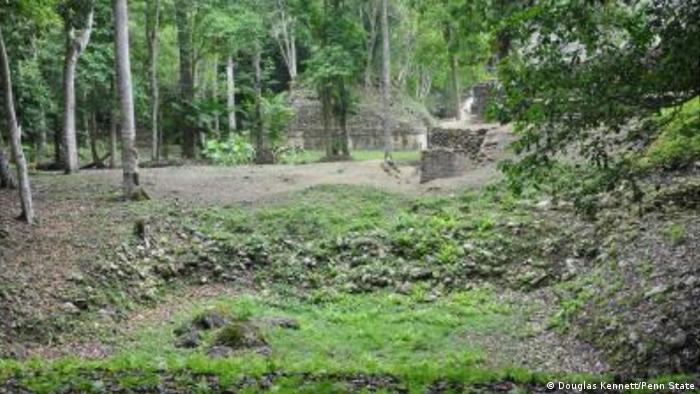 During the first millennium of the Common Era, the Yucatan peninsula was home to the flourishing Maya civilization. But circa 900 AD, it largely faded into the landscape, leaving in its wake spellbinding architecture and many unanswered questions.

Although the details of what led to the collapse of cities such as Tikal and Copan still remain sketchy, scientific findings suggests climate change was a key player.

A team of scientists came to that conclusion by combining data obtained from an ancient stalagmite, with information gleaned from Mayan artifacts. It all began in 2006, when Douglas Kennett, an archeologist at Penn State University in the United States, led a team of researchers into the jungles of Belize to explore a cave known as Yok Bolum.

Determined to better understand the circumstances behind the demise of a major civilization, he enlisted the help of experts from several fields. "This is a complicated problem, and we needed to bring climatologists together with paleoecologists and archeologists to solve it," Kennett said.

According to Sebastian Breitenbach, a member of the expedition and a geochemist at Cambridge University in the United Kingdom, the recently discovered and long-untouched cave contained evidence of rainfall patterns on the Yucatan peninsula - in the form of large numbers of stalagmites. Stalagmites are rocks sticking up from the ground, which form over the course of hundreds of years by water dripping onto the ground. 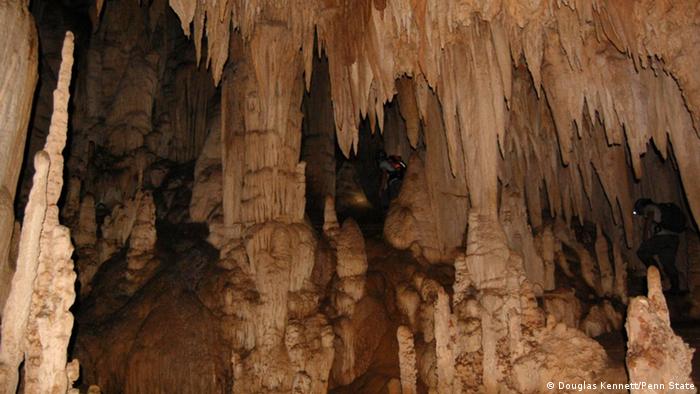 "We got lucky," Breitenbach said, in reference to a two-foot-long stalagmite found near the mouth of the cave. Yok-1, as it has been dubbed, was one of nine such tooth-like formations discovered at the location. It was subsequently sent to research labs in the United States and Europe for further study.

"Much like the rings of a tree, stalagmites can be used to reconstruct past climate patterns," Breitenbach said. Using a process known as #link:http://earthobservatory.nasa.gov/Features/Paleoclimatology_OxygenBalance/:radiometric dating#, the scientists were able to determine that the upper section of the cave formation was 2,000 years old, and had been growing continuously from the years 40 BC to 2006 AD.

By shaving Yok-1 into razor-thin sections, and #link:http://earthobservatory.nasa.gov/Features/Paleoclimatology_OxygenBalance/:measuring oxygen isotopes# as they went, the researchers were able to compile a 2,000-year record of rainfall. Their data showed how wet and dry patterns had impacted life on the Yucatan Peninsula over hundreds of years.

"We can now compare the geochemical information with the archeological evidence in the field," the geochemist said.

The data set included a detailed record of rainfall for the #link:http://www.marc.ucsb.edu/research/maya/ancient-maya-civilization/classic-period:Classic Period#, an era lasting from 250 AD to 900 AD and considered by historians to be the height of Maya civilization - as marked by the expansion of city-states and a distinctive writing style. 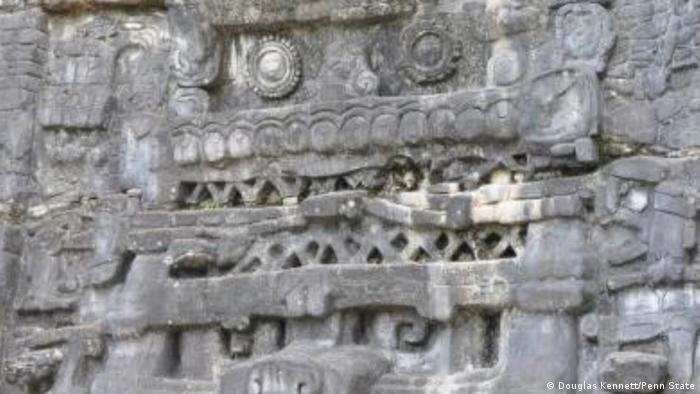 When scientists compared Maya archeological records with core samples from Yok-1, they registered a correlation between rain and the rise and fall of the civilization. Between 820 and 870 AD, for example, there was 40 percent less precipitation than in prior decades, leading Kennett to suspect that drought was to blame for the collapse of the monumental Maya world.

It's theorized that the Maya flourished between 440 AD and 650 AD, when ample rainfall produced sufficient crops to support the region's fast-growing urban centers and rising population. According to Kennett, the wet years were followed by a drier period, punctuated by severe droughts in the 9th and 10th centuries. But drought was not the only problem facing the ancient Mesoamerican civilization.

Kennett believes earlier generations of Maya farmers had grown accustomed to steady rainfall and had farmed the land too intensively to insure high crop yields. In order to feed increasing numbers of people, they moved off the lowlands to terrace the surrounding hillsides, meaning they had to clear the forests and undergrowth. The farmers were relying on marginal land for a burgeoning population, thereby creating a precarious future.

"They were trapped when conditions changed rapidly," Kennett said. 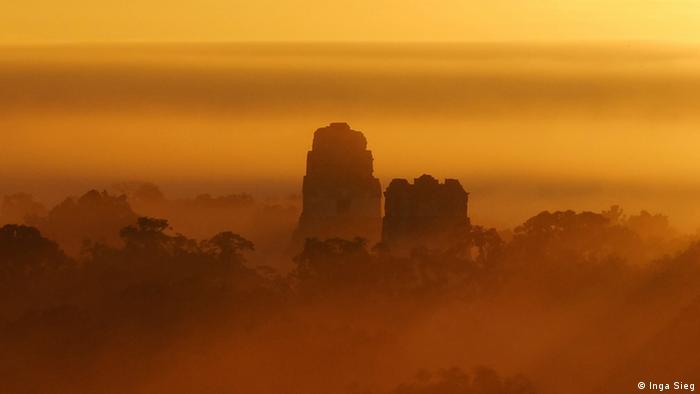 The fate of the Maya has long been shrouded in mystery

A further problem was their perceived reliance on Chaac, the Maya rain god. In order to appease him and ensure enough water to nurture their land, rulers ordered the construction of massive temples and sacrificed the kings of opposing city-states.

When the dry period took hold, this bloodletting and warfare continued, resulting in an escalating cycle of violence and retaliation that further destabilized the region and undermined the ancient Mesoamerican society.

But ultimately, it seems sustained drought was what the Maya elite were unable to defeat. And so, their civilization staggered to an end, with those who had been a part of it fleeing the cities for the forest, or dying of starvation.

Kennett sees the narrative as a valuable lesson for the modern world, citing "striking parallels" with contemporary California - which was settled during a period of abundant rainfall in the 19th century, and is now threatened by drought. "Things are stressed," he said.