Sirens of the sea: Can ancient myths protect the original mermaid from extinction? | Global Ideas | DW | 21.04.2015

Sirens of the sea: Can ancient myths protect the original mermaid from extinction?

Dugongs and manatees are under threat. But folk traditions surrounding these strange beasts - which from the Amazon to Australia are linked with legends of aquatic seduction - could help mobilize in their defense. 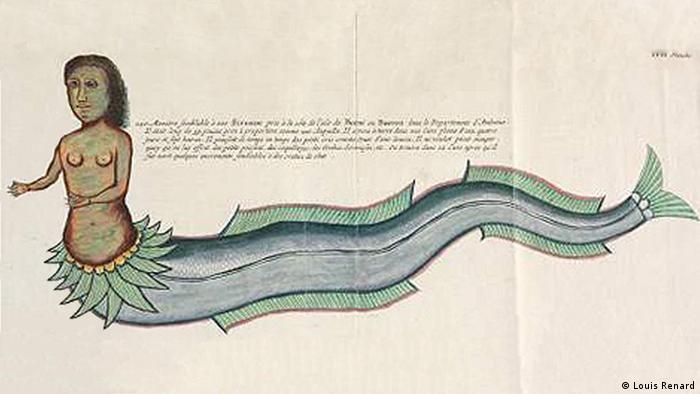 The manatee’s tail is shaped like an enormous paddle. From a certain angle, a cartoonish smile seems to grace its heavy snout. And despite its streamlined shape, the animal’s bulk gives it an ungainly appearance. Yet once upon a time, sailors starved of female company are believed to have mistaken these curious beasts for marine enchantresses.

In 1493, Christopher Columbus reported seeing "mermaids" off the coast of Haiti, but noted that they were "not as pretty as they are depicted, for somehow in the face they look like men." 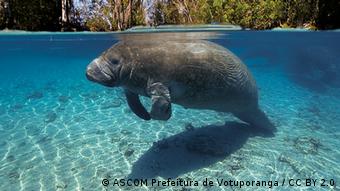 The explorer's diary entry is now thought to have described the manatee, of which there are four species. Together with the dugong, they make up the order sirenia, also known as sea cows. Wherever in the world sea cows are found, so too are myths that imbue them with symbolic and even supernatural powers.

Now, the sea cow has been cast in a role almost as unlikely as that of Columbus' sirens. This time, the animal is taking center stage in a political dispute between the Japanese government and the Okinawa Prefecture over plans to build a US military base on the coast there.

Campaigners who have been fighting the base for almost 20 years are increasingly focusing on its environmental impact. They say it will not only have a devastating effect on precious coral reefs, but will also wipe out Japan's last remaining dugong population.

"These dugongs are known as the world's northernmost population of the species, and it is estimated that there are as few as a dozen left," Greenpeace Japan's Yuki Sekimoto told Global Ideas.

In February, the environmental group launched a #link:http://act.greenpeace.org/ea-action/action?ea.client.id=1844&ea.campaign.id=35851:save the dugong campaign# to draw attention to the issue. Regardless, Tokyo is pressing on with its building plans. To the detriment of marine life, Sekimoto said.

"The concrete slabs which were being dumped into the bay have destroyed coral reefs even outside the construction zone, and the seabed in the area houses seagrass which is the main food source of the dugongs."

Hideki Yoshikawa, co-director of the Citizens' Network for Biodiversity in Okinawa, says the dugong's historical and cultural significance make it a naturally important symbol of resistance to the planned military facility. 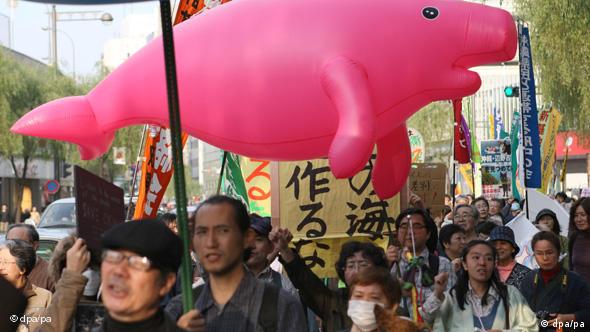 Thousands of Japanese people protest against a planned US military base.

"Historically, they are really important animals for the Okinawan people," Yoshikawa, an anthropologist, said. “In the past, people regarded them as messengers of sea gods. We have lots of legends and folklore regarding dugongs - one story I really like is that dugongs taught human beings how to mate."

Such legends are echoed across the globe.

Caryn Self Sullivan, a marine biologist at Georgia Southern University in the US has worked on manatee conservation projects around the world, and says where there are manatees, there are almost certainly myths. "In West Africa, the name you hear over and over again is Mami Wata," she said.

Lady of the sea

Mami Wata, as the manatee is known in that part of the world, also refers to a female water spirit, often depicted as a woman with the tail of fish. Mami Wata myths range from that of mystical healer and symbol of fertility to malevolent seductress.

Sullivan related one manatee origin story he is particularly fond of: The manatee was a maiden who was bathing at the river's edge when some strangers approached and stole her clothes. She dove into the water, using a palm leaf to hide herself - which she then used as a paddle, and became the manatee.

Indigenous cultures around the world also have their tales to tell. Some depict the manatee as a beautiful young woman, others talk of the Milky Way being spilt across the heavens when a dugong calf was torn from its mother's breast. Even the name "dugong" comes from a Malay word meaning "lady of the sea."

Like Columbus, those who have studied the animals say they boast little in the way of feminine beauty. But they also point out that sirenia are among the few mammals that have a pair of teats positioned under their forelimbs. There have even been reports of manatee mothers cradling their young in their flippers to feed them.

"When you look at the dugongs, when you see the calf swimming with its mother, it reminds you of us somehow," said Yoshikawa.

Helene Marsh, a professor of marine and environmental sciences at James Cook University in Australia, has been studying dugongs since the 1970s. She was first drawn to the species due to its cultural significance for indigenous peoples.

"In Australia, they are a huge symbol of indigenous identity," Marsh told DW. "If you go to Torres Strait, you see dugong symbols everywhere - on school uniforms, on buses. And in Thailand, in Palau they are very special animals."

Special in a variety of ways. As Marsh puts its, "they are incredibly good to eat." She says dugong hunting has been going on in the Torres Strait between Australia and New Guinea for 4,000 years, without endangering the species.

She argues that vessel strikes, gill nets and habitat loss - which have put dugongs at risk elsewhere off the Australian coast - pose a much greater threat, and that the tradition of dugong hunting means its protection is closely tied to the preservation of indigenous culture.

But she admits there are few places in the world where dugong hunting can be practiced sustainably. Almost everywhere sirenia are found, they are under threat.

In Florida, #link:http://myfwc.com/news/news-releases/2015/march/16/manatee-count/:recent surveys# suggest manatee numbers are rising. This has prompted the US Fish and Wildlife Service to consider changing its status from "endangered" to "threatened." But some fear that could impact funding for their conservation.

The Florida manatee is the only sea cow species not listed as in danger of extinction by the International Union for Conservation of Nature. But no population of sirenia is under greater threat than the Okinawa dugong.

Yoshikawa says that while objections to the planned base have to do with resistance to the US military presence in Okinawa, protecting the dugong - which has the status of a "natural monument" under Japan's law for the protection of cultural properties - has become a rallying point for protesters. And it's even reawakened an ancient connection to the natural world.

"The extinction of the dugongs symbolizes losing something very important," Yoshikawa said. "One good aspect of this long struggle against the construction of this base is that the people here - myself included - are learning more about the environment."

Greenpeace: Save the dugong campaign