Global Forum for Media Development: The next generation

A new chairman, a new steering committee, a new executive director: Global Forum for Media Development (GFMD) has a young crew on its bridge. But what is the future direction of this network? 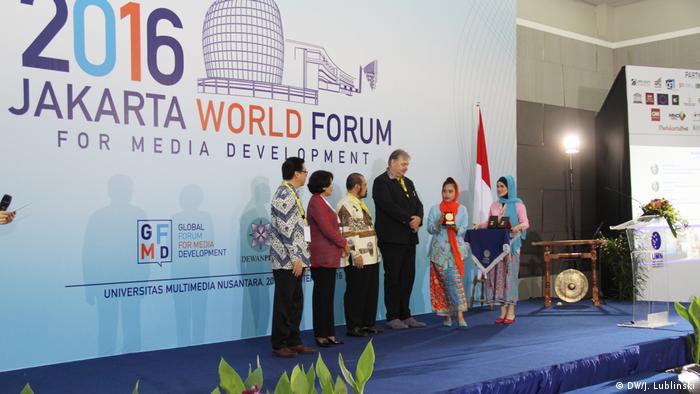 Corredor's inspiring talk was both a farewell speech and an address welcoming the GFMD's new steering committee members elected at the Jakarta forum, an international conference organized by GFMD.

Corredor thanked the new members, who include a representative from DW Akademie, for assuming the responsibility of advancing the global network. He also thanked the 400 experts from 62 countries present at the Jakarta forum for working on issues such as new trends in investigative journalism, safety of journalists, indicators for Sustainable Development Goals and identifying regional challenges for media in Southeast Asia. 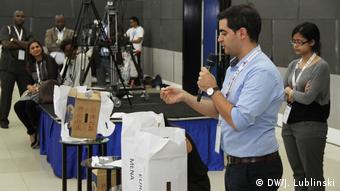 Ayman Mhanna, director of the GFMD presents election-results of the new steering comittee

Those at the Jakarta World Forum were united by the belief that media development needs strengthening and that this requires organizations from different countries to work together more, for example, by building knowledge exchanges, conducting joint research, combining advocacy efforts or coordinating media assistance activities.

And in relation to the Global Forum for Media Development, these considerations raise the question: How can a global umbrella organization specifically help with these issues and what exactly can it achieve? 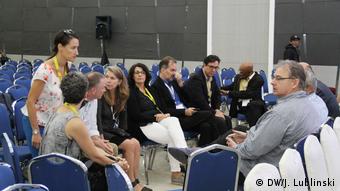 First meeting of the steering comittee after the elections in Jakarta

The study's findings feed into the future ambitions of new chairman Ricardo Corredor, who wants more South-to-South exchanges and a more active role for forum members from the global South. In this way, he aims to turn the network into a truly global forum for media development.

The new steering committee members from the global North, however, also have something to bring to the table: the US organization IREX, as well as France's CFI envision joint research activities and country evaluations to better convince donors of the media sector's importance.

Petra Berner from DW Akademie, in her presentation to the general assembly, expressed her interest in developing new concepts for media development to meet the challenges of the digital world. "We need to better understand new forms of digital participation, engage in dialogue on digital rights – and exchange with the expert communities that develop these areas," she said.

"Decoding the future" was the motto of the Jakarta World Forum for Media Development. It is now up to the next generation of engaged forum members to tackle this challenge – not only for sake of media development in general but also for the future of GFMD.

Ahead of the Global Forum for Media Development, Guilherme Canela from UNESCO talks of how similar challenges facing media ecosytems across the world mean different developing regions can learn much from each other. (18.09.2016)