On Sunday Wolfsburg doled out a 3-0 loss to previously unbeaten Mainz, before Mönchengladbach held Bayern to a scoreless draw. The Foals were the equals of the reigning German champs and could even have snuck a win. 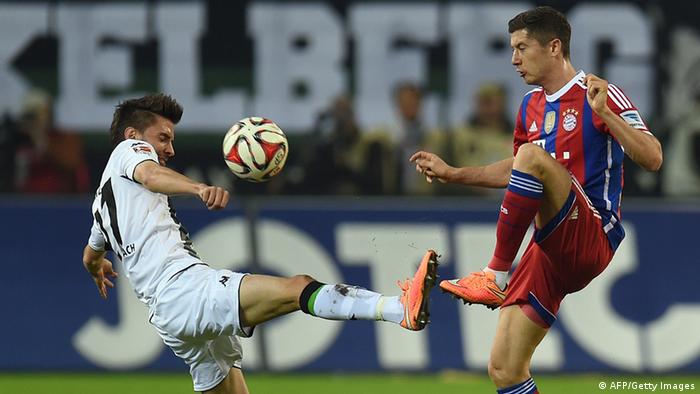 Bayern rolled into Mönchengladbach on the heels of their 7-1 Champions League thrashing of AS Roma, but the Lower Rhine region proved to be a tougher away destination than the Italian capital.

The Foals ceded the flanks but kept their penalty area packed, so that the Bavarians had difficulty creating early chances. David Alaba hit the outside of the post with a curling shot in the tenth minute, but otherwise Bayern had no good looks at goal.

Manuel Neuer was called into action in minute 34, when a rare Gladbach counter-attack released striker Max Kruse. Munich's keeper, though, was up to the job. He would turn out to be Munich's man of the match.

Seven minutes later, a deflected Robert Lewandowski shot almost trickled in, but that was all Bayern had to show for three-quarters of possession.

"The whole team - and especially our defense - stayed calm," said Gladbach coach Lucien Favre after the match. "We could have scored in the second half." 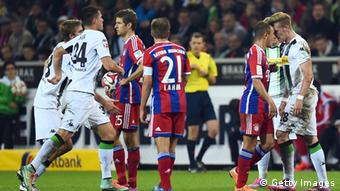 Gladbach's defending was no less determined after the break, and the Foals generated the first good chance after the break. André Hahn was released on the counter-attack in minute 53, and the forward drew a fine save by Neuer with a hard low shot. And for the rest of the half, the Foals remained the better side, repeatedly commanding Neuer's attention.

In a statistical sign of how much Bayern struggled, by minute 75 Neuer had significantly more touches of the ball than Lewandowski. Pep Guardiola brought on Claudio Pizarro for Thomas Müller, meaning Munich played out the match in an old-school 3-5-2 formation.

It didn't help. Instead it was Raffael forcing Neuer to turf again with a dangerous low shot. Bayern remained frustrated, but did get a glimmer of hope when Granit Xhaka badly turned an ankle after Gladbach had used up their substitutions.

Xhaka limped back on the pitch, leading Guardiola to complain vehemently to official Bibiana Steinhaus about time-wasting. His protests were in vain, as the Foals held on for the more-than-deserved goalless draw. 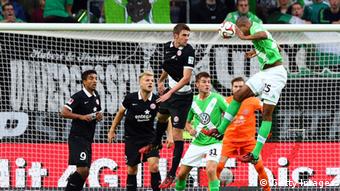 Naldo came up big - and tall - against Mainz

Tipped by many to make some waves at the top of the Bundesliga, the Wolves had been something of an enigma. But not at home against Mainz in Sunday's early match. Wolfsburg left no doubt as to who was boss early on against their overmatched visitors.

The Wolves generated a number of good chances from open play throughout the match, but it was on set pieces that they hurt their opponents. Naldo outjumped the pack to head in a Marcel Schäfer corner on the quarter-hour mark to give Wolfsburg a first half lead.

The second half was a near carbon copy of the first. Just before the hour mark, Naldo once against headed a Schäfer corner. Ivan Perisic just deflected the ball to get credit for his first goal of the season.

Daniel Caligiuri added a late goal to complete the scoreline.

The 3-0 win spoiled Mainz's undefeated record and took Wolfsburg all the way up to third in the table, level with Gladbach on points.

Borussia Dortmund went down for the fourth successive league encounter and are now in crisis mode. Elsewhere, two consistent teams remain on course for strong positions, while Stuttgart were goal-hungry in Frankfurt. (25.10.2014)

Dortmund lose again in the Bundesliga

Dortmund lost a narrow game against Hannover on Saturday as they kept their poor form in the Bundesliga going. Meanwhile, Stuttgart's return to form seemed clear until the game turned crazy in Frankfurt. (25.10.2014)