In Sunday's late action, Paderborn upset Hertha Berlin, and Freiburg beat Cologne. Earlier Patrick Herrmann and Andre Hahn were on song, as Gladbach built on their thrilling start to the season against Hoffenheim. 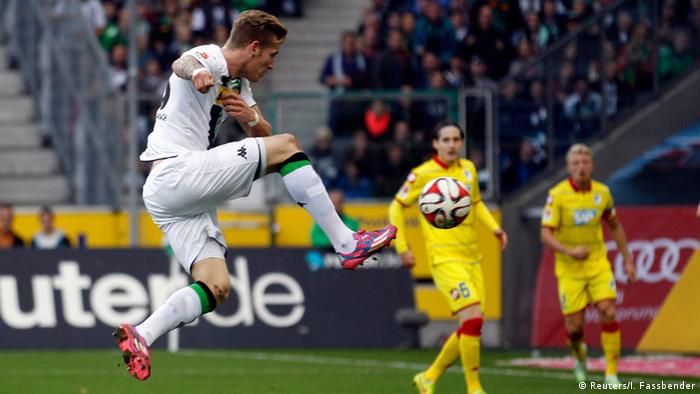 Borussia Mönchengladbach kept their unbeaten record intact on Sunday with a cantering 3-1 win over Hoffenheim. The Foals made this one look easy and move on to 20 points from 10 matches.

Hoffenheim also had an unbeaten season record as they arrived in Mönchengladbach, but Markus Gisdol's men found their adversaries stiffer competition than the other foes they've faced in this campaign.

Fresh from holding Bayern Munich to a goalless draw last round, the Foals were once again immaculately organized and jumped into the lead with a textbook counter-attack in the 12th minute. Right-flanker Andre Hahn finished off a string of one-touch passes with a composed finish.

Gladbach backed off the pace a bit, and they were punished. Anthony Modeste was able to equalize on the half-hour mark, slotting in from close range. That seemed to be the wake-up call: Only three minutes later, Hahn turned provider for Patrick Herrmann who restored the hosts' advantage.

After the break, Borussia came out pressing with purpose and pinned Hoffenheim in their own half, and after 52 minutes, Herrmann nabbed a brace, mopping up a well-hit free-kick by Havard Nordtveit, which Hoffenheim keeper Oliver Baumann could only parry.

The visitors struggled to galvanize themselves towards the end, and Gladbach easily killed the clock for the 3-1 win. 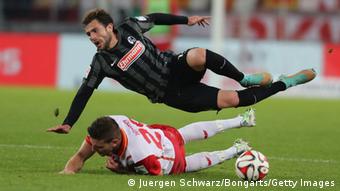 Freiburg came out on top over Cologne

Elsewhere, Freiburg finally picked up their first win of this season edging out Cologne by one goal to nil. That winner came after 51 minutes when Vladmir Darida dispatched from the penalty spot.

Hosts Cologne were largely harmless up front, and the Black Forest team were able to defend their lead until the final whistle. The victory will have lowered ever excitable coach Christian Streich's pulse a bit and takes Freiburg out of the two automatic relegation spots.

In the other late Sunday match, new-boys Paderborn downed Hertha Berlin at home 3-1. Marvin Bakalorz opened the scoring in the first-half after pouncing on a botched clearance. Salomon Kalou leveled things for visiting Hertha in the 41st minute, outmuscling his marker to head home from close range.

But the second half was all Paderborn, with Elias Kachunga and Alban Meha both finding their range for the hosts. The 3-1 win leaves Paderborn seventh in the table after ten rounds of action.

Dutch winger Arjen Robben got a measure of redemption when his late penalty capped a Bayern comeback from a deficit against Dortmund. Bayern won this edition of "Der Klassiker," which lived up to that label, 2-1. (01.11.2014)

Roberto di Matteo's promising start has continued, despite the turgid performance from the Royal Blues. But the mood was already dampened not long after the match got underway. (31.10.2014)

Bundesliga Round 10 in Pictures