Water conflicts come to the Andes as glaciers melt

The people of the Andes mountains have long benefited from melting glacial ice. But as those ice sheets start to disappear, conflicts over the diminishing resource could intensify. 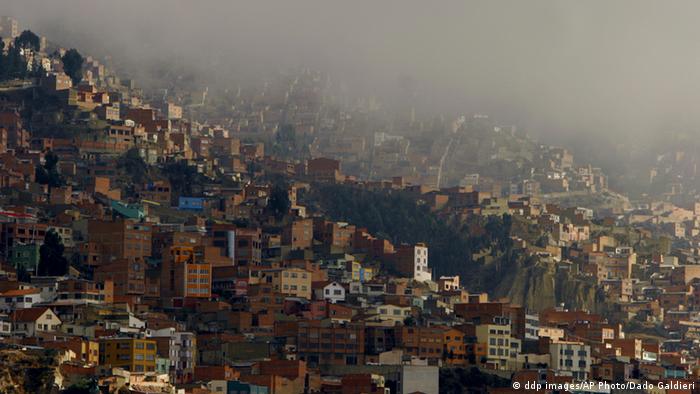 La Paz is home to a growing population, raising the pressure on resources

The majestic Illimani mountain just south of La Paz provides a dramatic backdrop to the bustling Bolivian city. But for residents who have long lived in La Paz, the changes on Illimani are striking - the 6,439-meter high peak is covered with much less snow than just one or two decades earlier.

And the transformation on neighboring mountain Chacaltaya is even more dramatic. Not long ago, it was home to the highest ski region in the world at 5,300 meters. But skiers no longer head to the slopes of Chacaltaya because the mountain’s glacier literally disappeared in 2009.

“That worries people,” said Karin Kemper, a water resources specialist for the World Bank who focuses on South America. “They don’t need scientists to tell them that something is wrong here,” she said.

La Pazis not the only city to be affected. Across the Andes, glaciers are melting at an alarming rate: according to estimates, they will all but disappear by 20 to 40 years from now.

That would mean serious consequences for the residents of the Andes. The impressive ice masses don’t just serve as a spectacular setting, but they also provide the main source of water across South America, from Colombia to Ecuador, Peru, Bolivia and Chile. 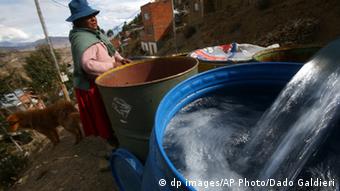 Many residents of La Paz depend on trucks to deliver water

During summer, the most rain-intensive period in South America, glaciers capture and store showers as snow. When precipitation eases in the winter, the snow melts and feeds fresh water into rivers below.

But with the melting of glaciers, the cycle is interrupted. The World Bank predicts that climate change will endanger the fresh water supply for 70 percent of Andean people – about 40 million residents – by the year 2020.

As water has become increasingly scarce, the competition for access to the precious liquid has intensified.

Even before climate change set in, water resources were already running thin – because the population and the region have both grown and developed rapidly, raising life standards and the demand for water at the same time.

That has in turn pitted rural communities against urban areas, and industry against private consumer within cities. “Things will become explosive over the coming decades because the glaciers will dry out,” said Pascal Girot, a senior climate change advisor for Latin America and the Caribbean at the humanitarian organization CARE. “The real problem comes when the glaciers disappear completely.” 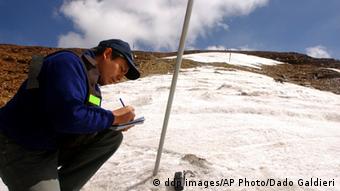 The Chacaltaya glacier melted faster than estimates, completely vanishing by 2009

In the short term, the Andean regions will get a brief reprieve, say experts. “Because the glacial ice sheets are melting, at first there is more water available than usual,” said Karin Kemper. For cities like La Paz, Quito, Lima or Bogotá, which are multiplying in size and population, the temporary abundance is a saving grace.

A growing economy has meant that the amount of water consumed per person has climbed. But, until now, the overflow of water from melting ice caps has been able to meet that demand in some places.

Yet, infrastructure in most Andean cities has not managed to keep pace, failing to manage the current flow of water on a permanent basis. There’s a lack of dams, large reservoirs, additional distribution networks and even an effective system to treat the water.

“The problem is that the water management infrastructure was conceived and built for a city of a certain size,” said Kemper. “Now the city needs to invest a lot of money to be able to serve more people.” That is why, say experts, it is crucial that countries like Bolivia and Peru improve and expand infrastructure now, before the water runs dry. The World Bank is researching the possibility of creating water storage systems deep under the ground. There are also more costly proposals to create far-reaching pipelines that would pump water from the Amazon basin or treated sea water to cities.

But improved infrastructure and technical measures are only part of the answer to shrinking water resources.

“It’s not enough for an outsider to come in and say ‘hey all you have to do is invest in a million-dollar water treatment plant,” said Girot. “The solutions have to come from within,” he said, pointing to the need for government-led initiatives and structures. 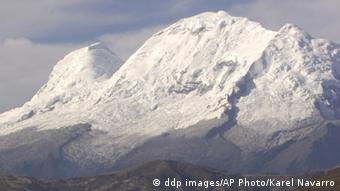 Across the Andes, the ice melt is accelerating

Some analysts believe that it will take a national organization with overreaching powers to be able to fairly distribute the scarce resource. In times of drought, the agency would have to override local government policies and restrict water consumption for homes and families, Girot said.

“The Autoridad Nacional del Agua (National Water Authority) is a good example for the Andes region. It’s an organization created by Peru a few years ago,” said Girot. The ‘Autoridad’ is an independent organization with its own finances and administration and has the highest authority in Peru when it comes to decisions about water supply.

If the case of drought, the Autoridad decides who has priority access to the available water. The organization’s main responsibility is to guarantee that each individual has access to sufficient water.

Agencies like the Autoridad can employ various methods of preservation, from limiting the water supply for certain hours every day to giving homes priority over industry or agriculture to levying higher tariffs on large consumers or relocating water-intensive industries.

Though water is becoming increasingly scarce, Girot remains optimistic. “The Andes are not nearly as dry or Jordan or the Arabian Peninsula yet. People there manage with very little water,” he said. A few years ago, the governor of La Paz suggested resettling communities if needed. Girot hower believes that is the last resort.

Melting glaciers usually serve as one of the most vivid reminders of global warming. Yet in some places - such as in parts of the Himalayan mountain range - climate change has actually made them advance. (21.06.2011)

The Peruvian Andes are home to the world's largest tropical body of ice. But it's melting at a rapid pace, exacerbating poverty in the process and jeopardizing the economy of the entire country. (22.02.2011)