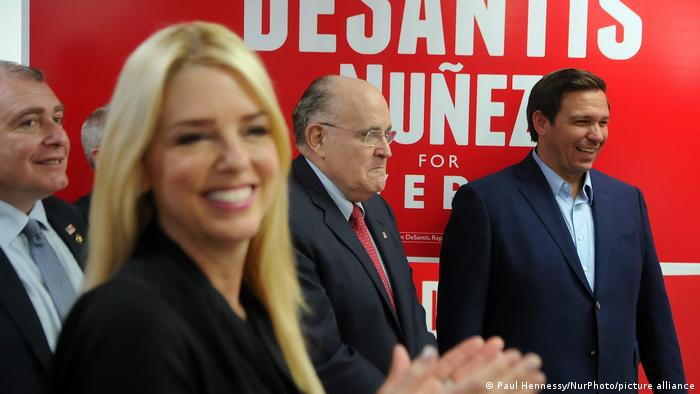 Lev Parnas, an associate of Donald Trump's personal lawyer Rudy Giuliani, was convicted in US Federal District Court in Manhattan on Friday over breaking US campaign finance laws.

Parnas, a 49-year-old US citizen who was born in the Soviet Union, was accused of using foreign money to gain access to Republican politicians in an effort to further his own business interests.

Jurors found that Parnas and Kushkin had used a corporate entity to make donations to Republican political action committees (PACS) in 2018 — among them a $325,000 (€279,175) donation to America First Action, a Trump-supporting super PAC. A PAC is a tax-exempt legal entity that pools donations and distributes these to political candidates.

Parnas was also found guilty of having directly made illegal foreign donations to state and federal Republican politicians in connection to a recreational marijuana business he intended to start. The money came from Russian financier Andrey Muraviev and was distributed by Parnas and three associates, in clear violation of campaign finance laws that prohibit foreign donations to US political campaigns.

Donald Trump: 'It doesn't involve me'

Parnas, a resident of Florida, denied the money was ever used for political donations. His co-defendant Kushkin, denied wrongdoing as well, but was convicted of attempting to use Muraviev's cash to buy influence.

"It is plain as day that these defendants agreed to donate Muraviev's money to US political campaigns," said Assistant US Attorney Hagan Scotten in the prosecution's closing argument.

Scotten argued that roughly $100,000 of Muraviev's money went toward campaign contributions in an effort to secretly inject his "wealth and corruption into American politics," adding that by doing so, "voters would never know whose money was pouring into our elections."

Parnas entered the public spotlight in the run up the the 2020 US presidential election when it became known that he and his business partner Igor Fruman — who pleaded guilty to soliciting foreign campaign donations in September — were working closely with Trump lawyer Giuliani to get Ukrainian officials to open an investigation into Hunter Biden, the son of now President Joe Biden.

Giuliani, whose legal license has been suspended over his spreading of Donald Trump's election loss lie and is under criminal investigation for the Ukraine incident, was not part of the Parnas campaign finance law trial.

Giuliani insists he had no knowledge of potentially illegal campaign contributions by Parnas and Fruman.

Nevertheless, his association with the men puts a spotlight on Parnas' activities in Republican circles, which he entered in 2018, with a pattern of campaign donations that were hefty enough to get him close to GOP stars.

Prosecutors argued, for instance, that Parnas and Fruman used an energy company to facilitate donations to Texas Representative Pete Sessions and other PACs supporting House Republicans.

Florida Governor Ron DeSantis, a rising star in the Republican Party, was also among those who received campaign contributions prosecutors say can be traced back to $1 million that Parnas and Fruman received from Muraviev.

Parnas also made headlines during the first Trump impeachment trial when numerous photos and videos of him with the president and members of his family began circulating online. Despite that evidence, Trump claimed not to have known him.

Earlier this year, another associate of both Giuliani and Parnas, David Correia, plead guilty to defrauding investors in a fraud protection business that paid Giuliani a $500,000 consulting fee. He was sentenced to a year in prison. Prosecutors say Parnas and Correia's company was never operational and instead the two used $2 million in investments for their own personal expenses.

Parnas is awaiting a second trial in connection with that scheme.